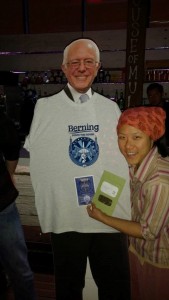 Minna Nilanont, entrepreneur and master tea blender of Hemp Kettle Tea Company, is trying to lift the stigma on cannabis through her tea mixtures while raising money for a political revolution.

The “Bernie Blend” hemp tea was created by Nilanont for her Maryland-based tea company. The not-so-secret ingredient in each of her creations is hemp seed from the hemp plant – which is a cousin of the cannabis plant. She says her idea for the new “Bernie Blend” is to “honor pro-cannabis presidential candidate Senator Bernie Sanders as a true advocate for social justice, peace, equality, and fair economic solutions for all.”

RELATED ARTICLE: The Price of a Successful Business in the Cannabis Industry

A unique cannabis tea recipe is available as an add-on purchase in states where applicable. Nilanont says 20% of Bernie Blend sales will be donated to his presidential campaign.

The Center for Responsive Politics finance report reinforces the grassroots theme echoed by Bernie and his supporters. According to their data, Sanders has less than fifty-thousand dollars in ‘dark money’ – which is money from politically active nonprofit groups. The difference in amount of so-called ‘dark money’ between Sanders and his opponent Hillary Clinton are staggering.  Clinton has 62.5 million in ‘dark money’ – at least 10 million more than any other candidate to date and a whopping 1,360% more than Sanders. 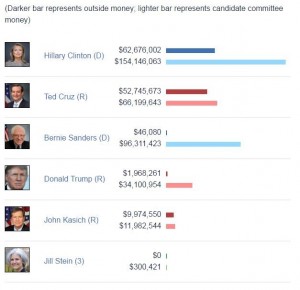 [Terms in Figure 1: “Dark money’ is the term used to describe politically active nonprofit organizations which do not have to disclose the sources of their funding. Candidate committees refer to campaign contributions from groups with names like “Citizens for Joe” or “Citizens for Jane”, for example.]

Hemp Kettle Tea isn’t the only cannabusiness “feeling the Bern”. The Stonedware Company in Portland, Oregon produces handcrafted porcelain smoking pieces to raise money for Sanders. Available in 2 pipe sizes and a chillum, the special pipes bear Bernie’s campaign logo and the chillum is adorned with an image of the canna-icon’s messy hair look.

Their unofficial Bernie-branded pipes and chillums raised more than $2,700 – the maximum amount of money allowed as a campaign donation per individual. The Stonedware Company is now directing the money they earmarked for Sanders to charities that support girls and women in STEM and the Arts. 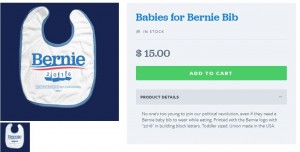 Not a smoker or a tea drinker? Another way to support Bernie Sanders for president is by purchasing official campaign merchandise like hoodies, mugs and even this baby bib (right) from his website.