The cannabis industry is booming right now, but once you get your successful business off the ground, at what cost would you sell it? That’s the big decision many ganjapreneurs are facing now that the market has had some time to prove itself.

As The New York Times recently reported, “it’s not just heat lamps in closets and nickel bags anymore: marijuana is getting some respect as legal sales take off.”

Legal marijuana sales reached 5.4 billion dollars in 2015, proving there is money to be made with the plant. That’s billions spent on a plant only legal in 23 states and the District of Columbia. Sales will only go up in 2016 as we look to Ohio, Nebraska, North Carolina, and Mississippi, all states which have recently decriminalized marijuana – a common first step toward medical and/or adult use marijuana legislation. Missouri has also passed legislation decriminalizing marijuana which takes effect January 1st, 2017.

Murray has her degree in microbiology and after a host of other mainstream jobs, she co-founded CannLabs, a Denver-based company that tests cannabis flowers, hash oil, vape pens, and THC-infused edibles to ensure they comply with state law.

“I did a reverse merger to an investor that wasn’t interested in building my dream,” Murray replied to me in an email for this article. Since 2010, the publicly traded company has become a staple in the Colorado marijuana industry. Unfortunately, Murray and the board of directors went through a nasty split at the end of 2015.

“I didn’t sell my company, it was taken away from me,” Murray said.

The experienced cannabusinesswoman recently spoke at the 2016 Women Grow Leadership Summit in Denver where she warned other women about how she lost her company. “If I can save one person from doing what I did my presentation was worth it,” she added, “This is how white collar crime is entering the marijuana business.”

One of those women in the audience was Minna Nilanont.

“I was on tenure track but realized teaching forever wasn’t for me. I hit my ceiling with the development of my skills and I want so much more out of life. More than just lecturing grammar,” she continued, “I want to be a trend that becomes a tradition.”

Is Hemp Legal In America?

Don’t know what hemp is? Think of it as marijuana’s non-psychoactive cousin. They come from the same cannabis species, but are genetically distinct from one another. Hemp can be used for many industrial projects including cloth, beauty products, and even food. One thing hemp cannot do is get you “high” it doesn’t contain enough tetrahydrocannabinol (THC). Its THC levels come in at about less than 1% compared to its THC-rich cousin, marijuana, whose THC levels can easily reach double digit numbers.

Guilty by association, hemp remains illegal to grow, according to The Controlled Substances Act of 1970 . The act outlaws growing all forms of cannabis, including Hemp. Instead, it’s common practice for the U.S. to import industrial Hemp as long as the THC levels measure close to zero percent. However, the 2014 US Farm Bill has given way for Kentucky, Oregon, and Colorado to begin hemp growing projects.

Passion For Your Project

Nilanont loves her hemp tea you can tell by the way she describes drinking it.

“People enjoy the tea on a physical level. In a very literal sense it nourishes them.”

The special ingredient has nutritional value, she says.

“Hemp seed has omega-3 fatty acids and all essential amino acids and that positively affects your endocannabinoid system and nourishes you. Our American diets are deficient in these things…it gives you a sense of well-being. It’s hard to put your finger on something that you didn’t realize you were missing until you have it.”

Hemp seed is legal and so is hemp seed oil. You can buy it at stores like GNC and Whole Foods.

“I use organic Canadian hemp seed which I blend with various teas, herbs and spices. Once you steep it, you are able to derive the oil from the seed and all the herbs,” explained Nilanont.

Hemp Kettle Tea Company has really taken off in the Washington, D.C. and Baltimore areas, and she attributes her company’s success to her hard work and passion for the product.

“This is not like any other industry because this plant makes people enormously sentimental. It elicits a profound connection with others and for some reason you want to share this experience,” Nilanont added, “hemp and cannabis, the whole plant, all of their aspects — there are just so many different uses for them.”

Her passion for her teas reach beyond its nutritional values, Nilanont is also very concerned about marijuana reform across the nation.

“I want people to drink more tea than alcohol. If we have cannabis social clubs in D.C., I want them drinking tea, not alcohol — because if you are smoking and drinking, it puts the scene in a precarious situation. It endangers us cannabis users and officials will be quick to re-ban cannabis,” she said.

Less than a year into the birth of her business, Nilanont was approached by a larger company to buy her business.

“10 out of 12 people said not to sell it,” she admitted. “My wife wanted me to take the money and run, but I was conflicted. I want to see how far we get because the cannabis and hemp industries are so young. We don’t know where it will go.”

She turned down the offer last week.

After further reflection Nilanont contacted me to share her lessons learned.

“I’m glad I didn’t sell because if there is one thing I learned from the Women Grow Summit, it’s that I need to sit down and figure out my numbers cold, in and out, and better than my accountant before I sit down with anyone,” she said.

She also has some advice for others who are new to the business scene, specifically women.

“Women need to know the numbers and stop being afraid and intimidated by them. We need to protect ourselves and each other from sharks looking to take advantage of new cannabusinesses. Predatory outfits are looking to absorb small and promising cannabis entrepreneurs,” she warns.

A few things to look out for, she says, “Watch out for non-compete clauses that prevent you from working in cannabis for a period of time. It’s too early to get locked out now.”

Nilanont is a member of Women Grow and will be speaking with Kyla Hill, Owner and Founder of Get Hemp Butter, at the Baltimore chapter meeting on March 3rd.

“I learned so much there, I have so much more to do and a lot of challenges to face. It just takes dedication and time,” she said of the Women Grow Leadership Summit in Denver.

That said, she also attributes her decision to turn down the buyout to sharing her success with her community.

“After I said no I felt very relieved. They wanted to take my operation to the West Coast, and I said it was important to keep it here on the East Coast because I want money to be brought into D.C. and Maryland and enrich our lives here. I want the green rush to have a positive effect here. I want our green boom, our emerald age,” she explained. 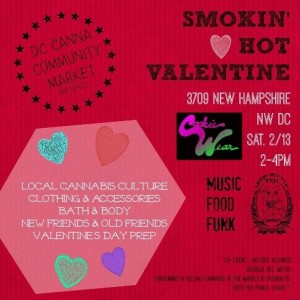 Minna Nilanont is bringing her teas to the D.C. Canna Community Market this Valentine’s Day weekend.

As for Genifer Murray, she has reemerged on the cannabis scene as a partner at Carbon Blue Consulting, a resource group for cannabusinesses specializing in all aspects of science, health and safety, laboratory setup, and training.