According to The European Cannabis Report,“Over the last twelve months, the European cannabis industry has grown more than it has in the last six years. Six countries have announced new legislation and over €500m [$570.28] has been invested in European cannabis businesses.” This is the fourth edition of this report from research group Prohibition Partners, who specialise in explaining the latest legislative developments and key industry trends in the cannabis industry.

If the number of high profile cannabis business conferences (Cannabis Capital Convention, Cannabis Europa, ICBC Berlin) taking place in Europe are anything to go by, then it’s clear the European legal cannabis market is developing at a staggering pace. The main shift in policy is centred around providing medical cannabis. European patients, policymakers, investors, businesses, academics and medical researchers are all set to benefit from the changes taking place.

Europe’s top three medical markets – Italy, Netherlands and Germany – currently have 130,000 medical cannabis patients. The report forecasts that this number will rise to 225K in 2019 – a trajectory that would amount to a €58 billion European market by 2028. This figure, they predict, will at least be doubled once they roll in legal cannabis for recreational use. Thus far, Luxembourg has pledged to be the first European State to implement a fully legal recreational cannabis market by 2023.

Growth for 2019 is expected to come from the German and Italian markets – the second and third largest European markets after The Netherlands, respectively. According to the report’s forecasts, by 2020 both will have overtaken the Dutch medical cannabis market, which is the oldest in Europe.

Germany, Italy and The Netherlands are developing tenders for cultivation licences, seeking to build a domestic industry with a localised supply of medical cannabis rather than relying on exports from Canada to meet demand.

Southern European nations are beginning to develop domestic cultivation programmes, which will offer a low-cost product available via intra-EU trade networks. Their climate is ideally suited to cannabis cultivation, reducing the environmental impact of growing in less sunny northern countries.

In total, there are now 14 European countries where medicinal cannabis is legal in some form – half of the 28 countries that make up the European Union. 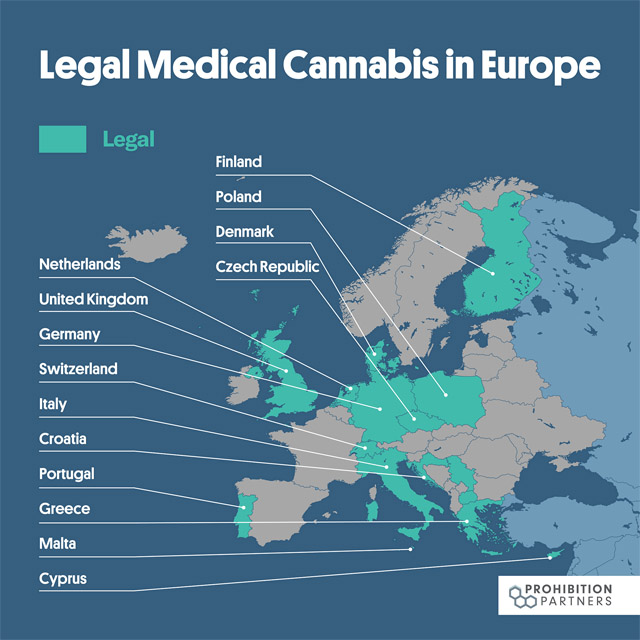 The European continent is home to 50 countries – speaking 24 official languages – each with their own individual laws. The report acknowledges there could be several challenges on the road towards legalisation. European policymakers and businesses will have to come to a consensus on laws covering cross-border supply chains, the standardisation of products and commercial agreements.

Cannabis Europa runs events that pull many key stakeholders together within the European cannabis industry. Last year saw their first event in London. In early February, we will see their first event in Paris. This is an interesting development, as in the words of the report, “France is emblematic of the hypocritical cannabis policies exhibited in Western Europe. The French government has maintained a conservative stance on both medical and recreational cannabis despite France being one of the highest cannabis consuming and hemp producing nations in the world.” The event in Paris will see the same level of policymakers, medical experts and business representatives that attended the London event. 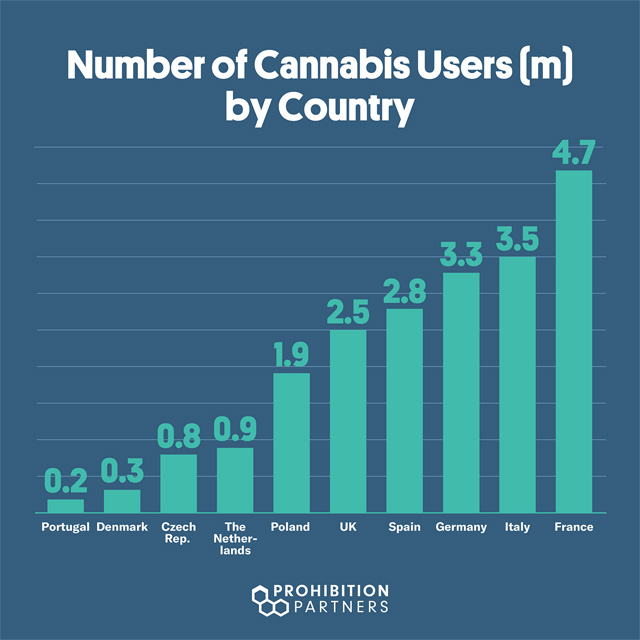 France is not the only country potentially on the verge of shifting policy. It seems governments and their legislative arms are already becoming increasingly pro-cannabis. This is largely due to growing public support in favour of legalisation as commercial and social benefits become apparent. Factors such as new employment opportunities, additional tax incomes, a reduction in crime and the scope for greater clinical research are all driving forces for the establishment of a legal cannabis market.

Politicians, healthcare professionals and entrepreneurs have followed the growth of the industry in the U.S. and Canada, where investments quadrupled in value in 2018. While Europeans do not expect a similar regulated recreational market in the immediate future, policymakers and businesses do anticipate substantial growth in the medical cannabis industry. However, reliable and replicable research will be vital in persuading governments to enact reform.

Europeans expect levels of regulation and standardisation across medical cannabis products to be perfected. A forthcoming review of the evidence surrounding medical cannabis from the World Health Organization (WHO) and the European Union (EU) could lead to a recommendation on its legal status. The outcome is expected to add to the ranks of the countries recognising the legitimacy of medicinal cannabis.

A regulated medical cannabis market could bring many economic opportunities to Europe’s power centres, as well as its smaller economies. This industry would give a welcome boost to those countries hardest impacted by the recession of 2008, including Spain, Portugal, Italy and Poland. The cannabis industry could also prove important to more severely affected countries, like Greece and Macedonia, who are utilising cannabis cultivation to support an ailing agricultural industry.

A Paradigm Shift In Business Across The Board

The versatility of cannabis will have a significant impact across multiple business sectors, including beauty and well-being, leisure, manufacturing, textiles, and food and beverage.

Widespread applications for cannabis, coupled with high consumption rates and exclusive pricing, indicate a potential market worth up to €123B ($140B) by 2028. 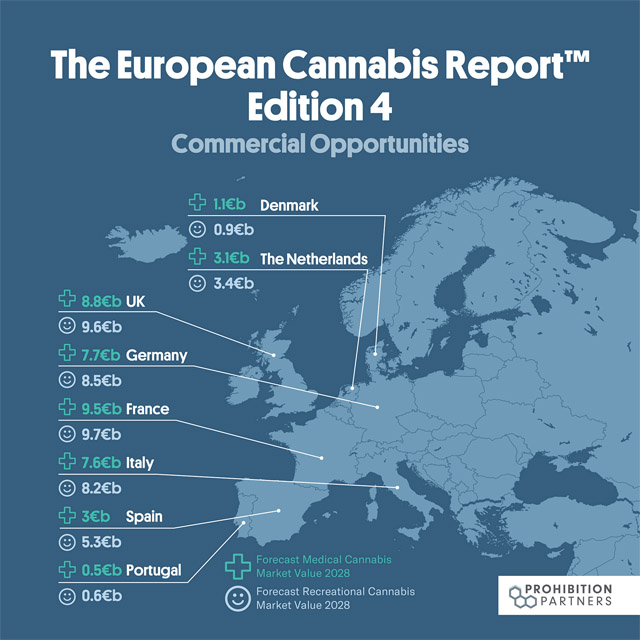 Europe’s nascent legal cannabis industry represents an exciting opportunity, provided stakeholders take a knowledge-based and considered approach. Only Luxembourg has any concrete plans for a fully regulated legal cannabis market. It’s a small country, but it sits in a prime location close to Belgium, The Netherlands, Germany and France. They intend to implement their market by 2023, which will present an interesting conundrum for neighbouring countries.

Physicians often play catch up in the wake of regulatory changes to national cannabis policy. While medical cannabis demand in Germany and Italy is on the rise, formal educational programmes for medical professionals are not yet in place. Among its key insights, The European Cannabis Report notes the need for extensive and credible education for licenced health professionals is quickly becoming a priority.

The U.S. cannabis industry is expected to outpace manufacturing job creation by 2020, and cannabis sales are set to exceed both liquor and wine markets in Canada in 2019. This highlights how much of an impact a legal market in Europe could have.

“Ultimately there will be thousands of opportunities in every country across the supply chain, as well as ancillary products and platforms. This is a fact politicians on either side of the political spectrum can no longer ignore.”

Can Cannabis Help Heal The Rift In Europe?

The cannabis debate has already reached the European Union, with its 28 member states. During the summer of 2018, the European Parliament’s Environment Public Health and Food Safety Committee called on the European Commission to create an EU-wide policy for medical cannabis. Such a move from the European Commission would provide a road map for member states who have been reluctant to act, citing commitments to the UN Single Convention on Narcotic Drugs – which is severely outdated in light of recent global developments in cannabis legislation. Guidelines from such an authority could provide a watershed moment in not just Europe, but globally.