“Tilray’s EU campus is another strategic milestone as we aim to build the world’s most trusted and admired medical cannabis brand,” said Brendan Kennedy, Chief Executive Officer of Tilray. 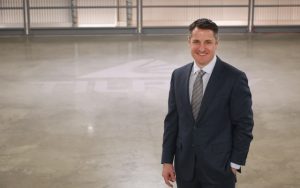 The 270,000 square foot campus will be located in the BIOCANT Research Park in Cantanhede, Portugal and will be constructed in phases over the next three years. It is expected to create 100 direct jobs which will include highly skilled positions. They will also be forging research partnerships which will have a positive impact in the local community and throughout Europe.

For many years, Portugal has had a forward-thinking approach to drug policy, and it is only fitting that it reaps the rewards from the now booming medical cannabis industry which still has room for massive potential growth globally – not just within the European Union.

“For the past two years, we’ve been working hard to find the right location for cultivation, processing, and research facilities to serve rapidly growing demand for high-quality, medical cannabis products in Europe. Portugal has the ideal climate to cultivate cannabis, a highly-skilled healthcare workforce, and a vibrant research community,” Kennedy added.

Tilray received the necessary licenses from the government of Portugal to import cannabis genetics and to cultivate cannabis for medical purposes. They currently lease laboratory and indoor cultivation space within BIOCANT.

Once complete, the EU campus will increase Tilray’s annual global production capacity to 62 metric tonnes (68.34 US tons) by the end of 2018.

Phase one will begin construction this month on property purchased by Tilray and will include an indoor laboratory and genetics bank, outdoor cultivation sites, a 10,000 m2 (107,639 sq ft) greenhouse, and a 1,500 m2 (16,145 sq ft) processing facility. The first phase is expected to be complete by spring 2018.

Portugal – located in southern Europe – benefits from a year round mild climate. Kennedy points out, “It’s more environmentally-friendly and cost-effective to supply European patients from Portugal than from northern climates.” Tilray’s main European competitor in the medical cannabis market – Bedrocan – produces their medical cannabis flowers under lights in a controlled indoor environment based in the Netherlands in Northern Europe.

European cultivation, processing and distribution also makes more environmental sense than the current situation, where Germany imports dried cannabis flowers from Tilray Canada. The main reason for this balmy situation is the complicated legal situation in Europe, where companies operating in the field have to navigate national laws of the European member states that are far from unified.

Once complete, the EU Campus will include indoor, outdoor, and greenhouse cultivation sites, as well as facilities to process, package, and distribute medical cannabis and cannabinoid-derived medical products. As a part of the BIOCANT biotechnology and life sciences research park, the EU Campus will serve as a hub supporting Tilray’s clinical research and product development efforts across Europe.

These research efforts will help to build the scientific case for medical cannabis, which in turn will aid harmonisation of national laws on a European level. It’s clear that at an EU level, there is little resistance to an industry that would have positive benefits to society on many levels, from much needed job creation and raising taxes to helping curb social issues caused by opiate and alcohol abuse. In order to gain this legal cannabis harmony, the pressure is to be applied at a local level for a bottom up approach. The key to unlock that door is job creation. Europe – in many member states – suffers chronic unemployment levels, with Southern and Eastern member states being the hardest hit.

Currently, ten European Union member states authorise some form of cannabinoids or medical cannabis. Fledgling medical programmes in Croatia, Cyprus, Germany, Czech Republic, Italy and the Netherlands will soon be joined by those in Poland and Denmark. Ireland, Spain and the United Kingdom are also currently navigating reform.

Globally, more than 600 million people live in countries that have legalised medical cannabis and cannabis-derived medicines, with over 200 million of those people in the EU alone.

By the end of 2017, Tilray expects to export medical cannabis products to five more countries. The company also anticipates announcing federal licences from additional countries, as well as research partnerships in Portugal, Germany, and other countries around the world.

Thus far, there is a lot to admire with regard to the European approach to medical cannabis regulation. Some European policymakers and regulators are embracing medical cannabis products that are standardised, and use well-characterised formulations meeting strict product quality standards. Each EU member state has taken its own approach, though many are calling for pan-European regulations for these products. Germany – the world’s second-largest market for pharmaceuticals, which legalised medical cannabis earlier this year and mandates insurers consider patient coverage – has completed a cannabis monograph that could become the template for regulatory agencies in other EU states if medical cannabis were added to the European pharmacopoeia.

In the last 30 years, pharmaceutical drug products containing THC, or THC and CBD in combination – including Marinol (Dronabinol), Cesamet (Nabilone), and Sativex (Nabiximols) – have been approved for several conditions. However, even in countries where federal health agencies have approved their use, these pharmaceutical cannabinoid medications are often rarely accessible to patients. In many EU countries, this is partly due to the onerous documentation requirements imposed on prescribing physicians and partly due to the high cost and non-reimbursable nature of the aforementioned drugs.

Regulators, lawmakers, medical professionals and industry leaders within the European Union must work together, seizing the opportunity to provide true leadership which will bring meaningful improvements to the lives of its 500 million inhabitants by enacting smart and effective regulations of cannabinoids and medical cannabis through harmonization of national approaches to ensure patient safety and access.

In response to a considerable unmet need for high-quality medical cannabis, Tilray is investing aggressively to expand its operations around the world. In addition to Tilray’s presence in Portugal, they have wholly-owned subsidiaries in Germany, Canada, Australia and New Zealand.

In December 2016, they became the first medical cannabis licensed producer in North America to be GMP-certified in accordance with the European Medicines Agency’s (EMA) Good Manufacturing Practice (GMP) standards. GMP certification is the most rigorous standard that manufacturers of medical products must meet in their production processes. In countries new to medical cannabis, GMP certification provides regulators and healthcare providers with certainty that products are safe and adhere to the same exacting quality control as other products one would find in a pharmacy.

In 2016 and 2017, Tilray launched clinical research partnerships with world-leading hospitals and universities to study the safety and efficacy of medical cannabis for a diverse range of conditions, including post-traumatic stress disorder (PTSD), chronic obstructive pulmonary disorder (COPD), pediatric epilepsy, and chemotherapy-induced nausea and vomiting (CINV).