Comedy and cannabis have gone hand-in-hand for many years. While marijuana was underground, so was the comedy. But that started to change in the 1960s. While cannabis was still very much underground, comedy relating to cannabis began to emerge. The comedy albums, and later the movies of Cheech and Chong, brought “stoner humor” to an entire generation who had either smoked weed before or knew someone who had and they realized that – instead of violence and destruction – mostly funny stuff happened when you were high.

Stoned people are happy people, and happy people love to laugh. Believe it or not, there was a time in this country when most people believed marijuana made the user violent. More than anything else, stoner comedy showed that we aren’t violent; maybe a little silly and sleepy and hungry, but by no means violent or dangerous.

Today, cannabis is becoming part of the mainstream thanks to Cheech and Chong and all the great stoner comedians who followed. You don’t fear what you can laugh at, and there is no reason to fear cannabis.

These days there are a lot of comedians who love weed and aren’t afraid to show it; people like Doug Benson, Sarah Silverman, Todd Glass, Bill Maher – the list goes on and on. These are the heirs to what Cheech and Chong built.

One of those comedians is “Medicinal” Michael Boris. Not only does Mike show the lighter side of cannabis, but he is also committed to spreading the truth about the amazing medical properties of the plant to an ever-widening audience.

Born in New York, Mike was raised in Las Vegas, where his career as a public performer got started. He got acquainted with the stage as a professional psychic before becoming a stand-up comedian and a finalist at the 2012 Ultimate Comedy Contest in San Diego, CA. Mike is now also the host of multiple events across the country where his ease on stage serves him well.

Medicinal Mike has taken his talents into the radio studio as well. As host of “The Nuglife Radio Show” Mike brings the truth about marijuana to the digital and terrestrial airwaves. A mix of education, music, comedy and cannabis, Nuglife is the first-ever cannabis education show on syndicated terrestrial radio. It is indeed a “higher” level of education that reaches an audience beyond the world of the Internet.

I recently got a chance to talk with Medicinal Mike about his career, radio show and the cannabis community in general.

Medicinal Mike: When I was a child every kid’s parents smoked cannabis but we all knew not to tell anyone. D.A.R.E. was on the rise so it was a conflicting time in the 80’s and 90’s.

MT: How did you become a professional psychic?

MM: I am a 5th generation reader of all women. Being the only boy I was always spiritually awake but didn’t realize I had a “gift” until someone read for me and I could hear the symbols if that makes sense. I then started working my way into the “Psychic Eye” bookshops and soon was discovered and thrown on casino stages by area51entertainment.

MT: How did you get into comedy?

MM: I have wanted to be a comedian since I could walk. I moved to California to become a stand-up comic and attended schooling under Joe Charles and many others to hone my craft. I love comedy more than anything I do.

MT: How did Nuglife Radio get started?

MM: Nugliferadio got started as a way to kiss the butts of other comedians. I originally called it “The Loophole” but after meeting the former Nug Magazine Crew we changed it to Nuglife and started our quest.

MT: Who have been some of your favorite guests on the show?

MM: My absolute favorite guest has been Tommy Chong, and Ponyboy of Los Marijuanos. When you get to sit with the men and woman who can build a revolution it can be positively humbling.

MT: You are involved in live events all over the country, what have been some of your favorites?

MM: I host over 40 cannabis events a year. They are all my favorites but particularly I enjoy the new guys or the “first shows” I like to see industry moving forward. I can be seen hosting Hempcon, Las Vegas and Alaska Hempfest, and the MJIC events to name a few. I also host Pro Wrestling as a ring announcer.

MT: What ailments do you use cannabis to treat?

MM: I unfortunately suffer from acute narcolepsy which is a seizure type disorder that causes your brain to confuse the signal to sleep and instead cause seizure. Luckily with the help of cannabis oil I have been seizure free for 5 years.

MT: Have you been surprised by the momentum of the marijuana legalization movement over the last few years?

MM: The only surprises that shock me are when cannabis community members fight internally and set the movement back.

MT: What was the origin of the infamous cannabis championship belt? 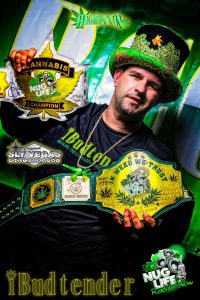 MM: The cannabis belt started as a way to educate people on cannabis therapy vs opiate pharmaceuticals. I am also a Pro wrestling ring announcer and I created the belt to be used in the ring. A nice man named Andrew Hutchings, who spent most of his time volunteering for homeless shelters, enjoyed carrying the belt at events. We didn’t have the heart to ask for it back so we decided to award it to him on the “Hempcon” stage. He looked so proud that we decided to create the “Thank You” for a thankless industry. Now we award 2 different styles of belt. We award patient activists and celebrity advocates. We have now awarded one to Andrew Hutchings, Tommy Chong, Cheech Marin, Julian Marley, Jeannie Herer, WWF’s The Godfather. We have a few scheduled coming up but I don’t want to ruin the surprise.

MT: What other projects are you working on?

MM: I am working most currently with Robert Mulligan on “Steve’s Garden” starring Michael Winslow of Police Academy series. Steve’s Garden is a cannabis education muppet style show geared to educate responsibly to all ages and to have your ribs splitting from laughter.

Humor is useful for so many things, and it can be critical when it comes to spreading a message. Most people don’t respond well when you get in their face, but if you can make them laugh they are much more receptive to what you have to say.

Through his humor, Michael Boris has brought the truth about cannabis to an untold number of people around the country and around the world. Whether on the radio, on video or on a stage, “Medicinal Mike” brings the funny and he brings the knowledge as well.

Comedy will always go well with marijuana for many obvious reasons, but the most important reason is that it has to. Through humor we will reach people unreachable in any other way, and they will see the light shine on the cannabis plant and all the amazing things it can do.