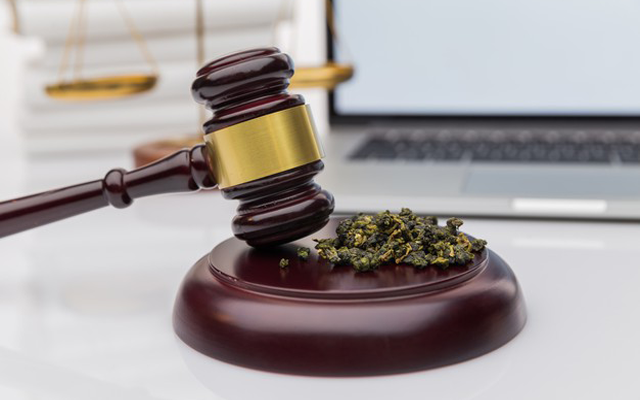 Advertising legal or recreational marijuana isn’t necessarily the easiest thing in the world. With how different states handle the drug and various restrictions based on these regulations, it can be challenging to know what you’re allowed to do.

Don’t worry, though, as we’ve compiled some of the essential information surrounding cannabis law and marketing. Here, we break down the fundamentals of marketing legal or recreational cannabis and give examples in individual states, such as California and New York.

Despite the heavy regulations set in place by local and federal governments, the cannabis market is by no means small. In fact, by 2023, it is said that the total retail sales from the recreational and medicinal marijuana industries will amass around $25 to $30.4 billion. In other words, demand for marijuana isn’t going away anytime soon, especially when more and more people are pushing to legalize the drug in their respective areas.

When it comes to marketing cannabis, it’s not as difficult to understand as you might think. Many states uphold marijuana marketing regulations similarly to how they regulate alcohol marketing. A great example of this would be how some states only allow advertising of marijuana on websites, TV, and radio channels that have fewer than 30% of their audience under the age of 21. A similar rule is still used in many states for alcohol.

And while individual states may allow marijuana and marijuana marketing, do remember that the state itself does not. In other words, while your local government allows the selling and marketing of the substances, the condition can intervene with your business if you enter their jurisdiction.

Ever wondered why you don’t see national-level marijuana ads? It isn’t because the industry lacks the funds to do so. On the contrary, many marijuana businesses only limit their advertising to their local state to avoid federal complications. States such as Colorado, which have legalized marijuana, still prevent the advertising of marijuana outside their jurisdiction. So you can’t place ads on nationally-broadcasted channels or radio shows for the time being.

Other than this, there are a few other points to consider when marketing cannabis. For example, you shouldn’t state anything unproven in the advertisements. Verified researchers must back all claims. You also shouldn’t try to promote the over-consumption of marijuana. Finally, you’ll find that some states require you to mention all known side-effects of the marijuana product you’re selling, similar to how cigarettes and other tobacco products are sold.

Online and Traditional Marketing of Cannabis

Cannabis marketing has changed over the years due to the gradual transition towards more social media and PPC-oriented marketing. However, that doesn’t mean the traditional marketing scene has died, and on the contrary, it’s arguably better in some aspects than online advertising.

Depending on the medium you use with traditional marketing, you may find quite a bit of success with it. For example, a well-placed billboard could do better than, say, a clickable ad on some random website. It also helps that since they’re local by nature, billboards, brochures, and the like won’t get you into federal trouble.

It isn’t all smooth sailing with traditional marketing, though. Notably, you may find it difficult to market anything cannabis or CBD-related on TV or radio, which are arguably the most effective methods of traditional marketing. This is because not all radio and TV stations allow cannabis-related ads to air on their platforms. And since this isn’t by any means a violation of free speech, they’ll probably continue to do so for the foreseeable future.

If you manage to air ads on TV or radio, don’t expect any primetime slots. Radio and TV stations usually reserve “mature” ads for late in the evening, where the station won’t gain as much traffic.

On the other hand, online marketing can be a great way to grow your business early on. PPC, SEO, and social media marketing services can quickly get your product visibility locally. With the ability to limit online ads to individual states, you can avoid any federal hassle, too. It also helps that many people browse social media and the Internet, in general, these days. This influx of netizens can land you more customers than with traditional methods if appropriately planned.

What Are California’s Laws for Cannabis Advertising?

California’s marijuana industry is arguably one of the largest today. This is thanks in part to the overall popularity of the state among recreational users. Here are the current regulations in place regarding cannabis advertising:

Do also note that for those selling medical marijuana, you are required to provide notice regarding physician recommendations.

What Are New York’s Advertising Laws for Cannabis?

Medical marijuana advertising laws are understandably strict under New York law. For example, ads that claim that a specific medicinal marijuana product is better than another is strictly prohibited. The only exception to this case is if the ad can be backed by explicit and substantial evidence. Disparaging other marijuana products in an ad is also prohibited.

Because New York hasn’t fully legalized marijuana just yet, you really can’t advertise anything related to recreational marijuana. So far, only medical marijuana has received the green light.

What Are Colorado’s Pot Advertising Restrictions?

As one of the first states to legalize recreational use back in 2012, Colorado has solidified its regulations, many of which are copied by other states. Colorado is known explicitly for strict rules against certain forms of traditional media, including:

The only exception to online advertising in Colorado is that you can advertise on sites with no more than 30% of their audience under the age of 21. All outdoor signs are also prohibited except for characters placed in a Retail Marijuana Establishment to identify the business.

Colorado also prevents any targeted advertising outside the state, as mentioned earlier. Regarding print ads, they can only appear in publications wherein the readership’s under-21 audience is no greater than 30%.

The History of Cannabis Legalization in the US

Cannabis wasn’t always legally sold. Previously, marijuana and other recreational drugs were outright banned. This was due to a series of laws and acted passed down over decades, beginning during the early 1900s. The Controlled Substances Act (or CSA) officially outlawed the substance back in 1970, and for a while, any use of the drug in the states was considered illegal.

All that changed during 1973, when Oregon became the first state ever to decriminalize the drug. Many states followed suit, including California, Alaska, and Ohio. Certain cities also decriminalized the drug.

In 1978, the movement that pushed the medical use of marijuana began when a man named Robert Randall was tried to cultivate cannabis. Claiming that he was using the drug to relieve glaucoma symptoms, his charges were dismissed. Years later, individual states would pass laws to legalize the medical use of cannabis.

Illinois joined the other states in 2019 through legislature while also legalizing the commercial sale of marijuana. New Jersey, Arizona, South Dakota, and Montana also legalized recreational use in 2020.

The Marijuana Opportunity Reinvestment and Expungement (MORE) Act was passed on December 4, 2020. This act pushed for the legalization of marijuana at a federal level by removing the substance from the Controlled Substances Act.

Despite the industry’s rapid growth, it still can be challenging to advertise cannabis in the United States. Only some states have full legalization, and even those states have strict regulations on what you can and can’t do. Hopefully, however, this article has helped clear up any questions or concerns you may have had.