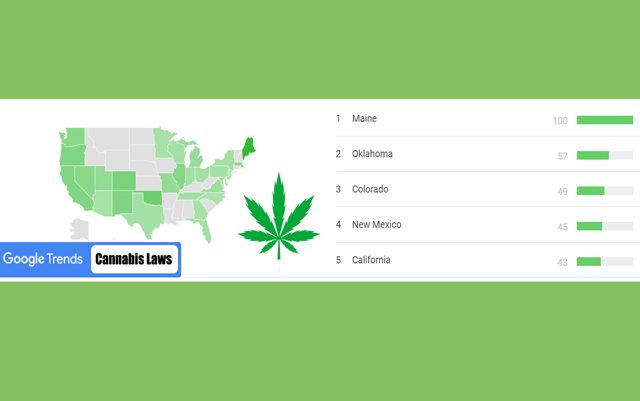 We take a look at which states are searching for marijuana laws the most according to Google trends. Marijuana legalization continues to spread throughout the USA, and more states are decriminalizing cannabis. Most of the searches for the latest cannabis laws are coming from Maine. The reason for so many searches coming from this state is because it’s finally almost ready to launch recreational sales.

Below is a summary on current marijuana laws in Maine, Oklahoma, Colorado, New Mexico, and California. Find out about the latest marijuana possession and cultivation laws as well for these states.

Colorado allows for the use of medical and recreational cannabis. Recreational purchases can be done by adults 21 or older with validation from a government issued ID regardless of whether they are a resident of Colorado or a tourist. In order to be a medical patient and obtain a medical card an individual must be a resident of the state and meet qualifications, note that Colorado along with most other states dictate that minors also require guardian approval.

According to Colorado’s cannabis laws adults are allowed to be in possession of up to 1 ounce of marijuana.

You don’t need to be a Colorado resident in order to possess and consume marijuana, however you must show government issued identification to verify that you are 21 years or older.

Adults are permitted to cultivate up to 6 cannabis plants, 3 of which can be in the flowering state. All plants must be kept in an enclosed space, you must also ensure that no person under the age of 21 may be able to access them.

Similar to the cannabis laws of Florida, Oklahoma’s laws have recently allowed the legalization of medical marijuana in 2018 while recreational marijuana use still remains prohibited.

Medical cannabis patients who are legally registered with the state are allowed:

In order to be able to cultivate up to 6 marijuana plants and 6 seedlings patients must have a valid state issued medical marijuana license.

Oklahoma’s weed laws mandate that plants must be grown at the patient’s residence, however, they are allowed to appoint caregivers to grow the cannabis plants for them.

Maine allows for medical and recreational use in adults 21 or older, this includes the cultivation, possession, and selling of marijuana.

In the state of Maine individuals 21 or older can have up to 2.5 ounces of marijuana.

In addition, adults are permitted to own and cultivate up to 3 mature marijuana plants, 12 immature plants, and as many seedlings they want.

As stated by Maine’s weed laws adults are allowed to 3 flowering marijuana plants under certain regulations. The plants must be cultivated under the grower’s home residence and they must be kept hidden from the public eye. All plants must be tagged as well with the following:

Medical use of cannabis has been legalized since 2007 however recreational use is still illegal. Small steps have been taken in terms of decriminalizing cannabis such as the approving of Senate Bill 323 which made first time possession of up to a half ounce of marijuana a petty misdemeanor offense (originally a criminal misdemeanor) with a punishment of a $50 fine.

Medical patients are allowed to be in the possession of up to 8 ounces of cannabis over a 90-day period under the state’s marijuana laws.

New Mexico’s laws are very strict when it comes to cultivating. There are two ways you may be able to grow marijuana legally in the state of New Mexico, either by being a medical patient or by being a caregiver. Medical patients or their caregivers can cultivate up to:

Growing any amount of weed without holding either of the 2 positions mentioned above is considered a felony that can land you 9 years of jail time.

California’s cannabis laws state that weed is legal for both medical and recreational use. Legal adults can purchase cannabis recreationally with a valid ID. An individual can choose to become a medical patient if they meet qualifications and be issued a medical card with physician approval. Qualifying patients under the age of 18 also require permission from their guardian.

California’s marijuana laws allow for residents to be able to own and grow up to 6 marijuana plants at their place of residence. All plants must be hidden from the public and grown in a secure locked area.

Individuals 21 or older are able to possess 1 ounce (28.5 grams) of cannabis legally under California’s marijuana laws along with up to 8 grams of marijuana concentrate. Medical patients, on the other hand, are allowed to possess up to 8 ounces.