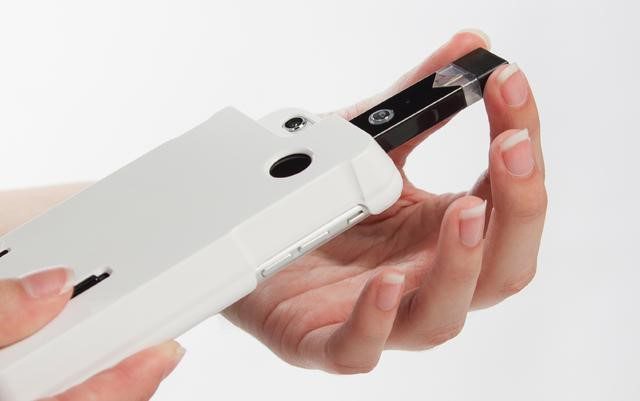 Society has become so reliant on some technology, such as cell phones, that very few people forget to take theirs with them when they leave the house. However, additional items – like a vaporizer, for instance – may not always be at the top of the “need to grab” priority list. These kind of common, daily annoyances and inconveniences inspire the birth of brilliant ideas – and in this case, that brilliant idea is a vaporizer that is built into a phone case and stays charged even while you’re out and about. Thus the creative minds behind this idea, Vaportronix, LLC, launch the first of its kind, iPhone case vaporizer called the VQ.

Vaportronix is a Miami-based company with big ideas; one of them being the VQ, the newest piece of technology that any vaping connoisseur will want to get their hands on. The VQ is a phone case and vaporizer all in one – well, technically two. The VQStick is a small vaporizer with a cartridge that is filled manually,  and it fits neatly inside the VQase, which keeps it charged all day long. The VQStick is meant to last for at least 100 puffs, which is a lot, and it’s doubtful anyone would need to take 100 puffs before putting it back in the case, so essentially it will always be charged.

Everyone has their own “out-the-door,” routine; grab your wallet and/or purse, find your phone, your keys – and for many, that routine includes grabbing your vape pen as well. Technology is supposed to make our everyday lives more efficient, right? Well, that’s why the creators of the VQ made this product. They have combined two pieces of technology that people tend to take with them everywhere in a clever, efficient and stylish way. 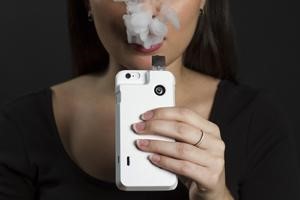 In the early days, vaporizers were a great change of pace for those attempting to quit smoking cigarettes and for others, it’s now just a cleaner way to consume cannabis. Regardless of what you vape, there is still one problem: it’s one more thing you have to remember to take with you whenever you go out. The invention of the vaporizer itself is an innovative way to make smoking more efficient, by requiring fewer tools or materials to consume; but even with that convenience, the most unique portable vaporizer products still have their drawbacks – like a short battery life.

The VQ comes with a charging cable – so the case holds a charge all on it’s own – meaning it will never drain your phone battery to use the case to charge the VQStick. The VQase itself can hold a charge for up to two weeks (depending on usage, of course) so you don’t even have to remember to charge it every night, let alone multiple times a day. Future versions of the VQ will be able to charge your phone, the VQase, and VQStick wirelessly as well, which would be another feature unique to this line of cell phone cases.

Compared to similar technology, the VQ is way ahead of the game – the only other similar product on the market right now houses a battery which powers a vaporizer attachment, whereas the VQ actually comes with a vaporizer (the VQStick) that fits inside the case. So rather than having a bulky vape on the end of your phone (in video reviews of competing products, it almost makes it look like an old style cell phone with an antenna) you will find the ultimate level of discretion with the VQ.

According to Steven Stanimirovic, CEO / Co-Founder of Vaportronix and lead developer of the VQ, they wanted “to create the most convenient and discreet way to vape – and always have it charged.”

“We have truly cornered the market on this idea. We hold 25 different claims filed in our patents on the case itself – so don’t expect any other company to come out with the same thing over the next few years,” says Steven.

Designed and assembled in the United States (with the exception of the manufacturing of the VQCartridges and the VQStick) the VQ is definitely an innovative step forward in the world of technology and the streamlined integration of our daily lives. The VQStick can be taken out and used by itself, or it can be used while it is in the case for more discretion – creating a one-of-a-kind device. 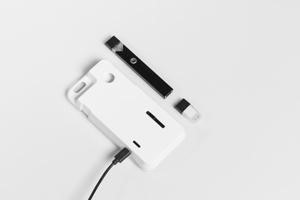 Vaportronix conducted a soft launch in August 2016, so the VQ is already available for purchase. For the moment, it is only available for iPhone 6 or 6S – but a new version for the 7/7S is on its way in the coming weeks. A version of the VQ designed to fit the Samsung Galaxy is also in the works, set to be released in 2017. At this point, there are over 100 million people using iPhones in the United States – assuming only a small percentage use a vaporizer regularly, that is still thousands of individuals who could benefit from the VQ.

Unlike many manufacturers, who require that you use their pre-filled cartridges, Vaportronix offers two different cartridges that will fit the VQStick – both of which come empty and can be filled with whatever you choose. Currently, they have one cartridge for liquid substances, like e-cigarette liquid or cannabis oil; and a second one that is meant for substances like wax and is definitely geared more towards being able to vape dabs. In the future, they may even have a model that will allow for dry herbal blends – perfect for anyone who still prefers to consume cannabis flower even though they have made the switch from smoking to vaping.

At the moment, the VQ starts at $99.99 for the starter kit – which comes with the patented VQase for the iPhone 6/6S, the VQStick, two refillable cartridges (one for liquid, one for wax), a dual USB charger (which will allow you to charge the VQase and your phone at the same time) and a USB charging cable. They also have their new all white and all black starter kits for pre-order at the same price (the original is a white case with a black VQStick). There is also a package for $129.99 that features the original white case and black VQStick but also comes with a second VQStick, which is white.

Designed to get rid of two common vaping problems – forgetting the vape pen itself and short battery life – the VQ definitely brings the ultimate convenience to vaping on-the-go. Always charged and always with you, so you never miss a puff.

To learn more about the VQ please visit their website here.

Government-Owned Marijuana Businesses are the Most Profitable in Canada, Missouri Democrats Won’t Support a...