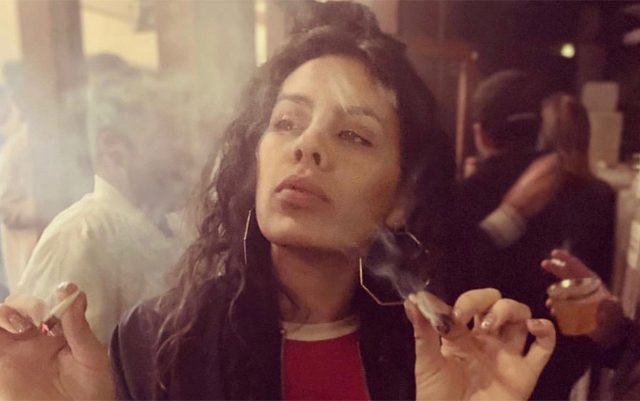 Part of it has to do with cannabis becoming more popular and profitable. More male executives are coming over from other industries and recreating the traditional American corporate culture, where men hold more than 75% of senior positions. As conservative money men see more potential dollar signs in weed, they’re pushing women out of the boardrooms and bringing in their bros.

This series will shine some light on some of the the bold, strong, pioneering women that keep the cannabis industry running in Los Angeles.

California Caregivers Alliance (CCA) in Silverlake is a dispensary run entirely by women. The shop is well-known and loved by locals who appreciate the unique art and atmosphere, the popular deal wheel, and the educated budtenders who are always enthusiastic to listen and help you find just the right product for your needs.

Laurie Cardenas has been at the shop for about a year and a half and has a no-nonsense attitude when budtending behind the counter at CCA. With her small stature she looks even younger than her twenty-six years, but she’s no naive newbie to the industry. She’s been working in the cannabis industry for over six years and has worked at several dispensaries around Los Angeles. She says that she loves the unique sense of community she feels in the women-only shop. “There’s no sexual harassment on the workforce, which used to happen a lot at old shops.”

Aside from direct harassment, she explained that even having even some men around can disrupt the working environment for women. Women can be pressured into acting or dressing certain ways by male bosses. Some may also get preferential treatment for sexual acts or dating supervisors, and the whole environment can become competitive and catty.

“I feel a lot more comfortable here. It’s more like a family than a job. We understand one another because we are all women, so there’s no misconceptions or judgements, like if we’re in a bad mood if we’re on our period or something like that. It’s just much more enjoyable and comfortable to be in a workplace where you can be yourself.”

Cardenas is currently in school for sociology. She has aspirations for law school, and she’s considering cannabis law. She is always trying to learn more about cannabis and wants to show people that, “there’s more to weed than just getting high.”

“I love the knowledge behind it, like all of the cannabinoids in weed; there’s more than THC there’s CBD, CBG, CBN, etc.. so it’s cool to know all that. I love how I’m educating people and broadening their horizons on weed. I know a bunch of people who’ve had one bad experience on weed and hate it, and I think my purpose is to really educate them on why they probably felt that way, and it’s probably because they didn’t dose themselves properly or they smoked something that was too potent for them.”

Cardenas loves helping people find the right path on their journey into cannabis. “It’s great when really old people come in and they’re just starting to smoke and I can lead them to a petra mint, which is 2.5mg of THC, or something light like that, and they love it because they had a proper dose, versus eating a 1000mg korova, and then of course they’re gonna hate weed.”

It’s those human connections that keep her drawn to budtending. “It’s a fulfilling feeling when I have someone who’s really sick with cancer or something and they come to me looking for advice and when I give them something that really helps them. And they come back three weeks or a month later and they’re like, ‘what you gave me really helped me.’ That’s really why I’m in the industry, because it’s super dope to help others and heal them with cannabis.”

For Laurie, the drive to help others heal with cannabis is personal. “My mom had vertigo and she couldn’t walk or drive. None of the medicine that was prescribed to her helped her. Then I gave her Prana 1:1, which is a product we carry. She’s a Catholic, conservative, old-school Latina mom who was so against weed. She knew I worked here, but never partook in it, and then she finally trusted me. The next day she was walking and driving and she called me because she couldn’t believe it. She was like ‘I’ve been bed-ridden for a month and I’ve been taking pills for a month and nothing helped’ and I had her moving the next day. That was really awesome.” She also loves the fact that it’s a healthier alternative to most prescription medicines, “I would rather my mom takes this than an opiate or something like that.”

Cardenas is passionate about the plant’s possible use as an alternative to traditional pharmacology. “It helps people with anxiety and PTSD, so we have a lot of veterans that come in. It’s good to see them smoking weed, because I would rather have them smoke weed than taking hydrocodone for their pain. It’s dope when people come in and say, ‘You helped me get off opiates.’ So the fact that people call it a gateway drug, I think that’s bs, because in fact it’s been proven that weed can help you get off of harder drugs. That’s my passion, helping people with the medicinal aspect. But of course it’s still cool to help others find a product that gonna make them have fun with their friends at a party.”

Like many women in the industry, the medicinal, healing properties of cannabis is a big reason why Cardenas is so enthusiastic about working in the industry. However, the biggest thing Cardenas wants to accomplish is to break stigmas surrounding cannabis use. “Like [the stigma] that a person who smokes weed is just a lazy person who doesn’t do anything. I’m a full-time student, I work my ass off, I work full-time, I live on my own, I have my own car, and I just love the whole hustle aspect about it. I want people to know that you can be a stoner and be successful as fuck and get shit done. You can be a pothead and still have your shit together.”