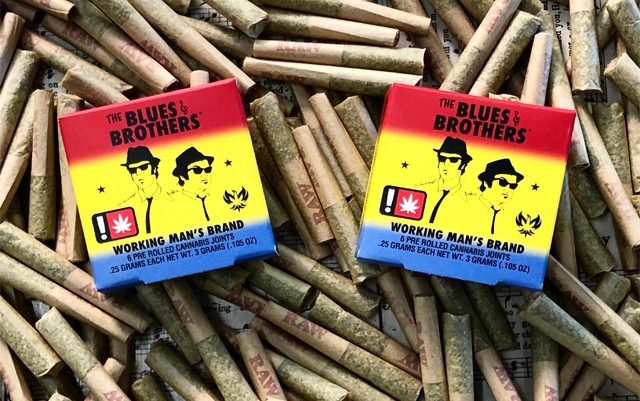 The Green Solution (TGS), one of the first recreational cannabis companies in the nation, has partnered with legendary performer Jim Belushi and his Oregon-based cannabis company, Belushi’s Farm, to debut The Blues Brothers® pre-rolls in Colorado. The pre-rolls will be available at select TGS locations across the state starting on Saturday, October 24.

Named after the band, legendary movie and “Saturday Night Live” characters made famous by Jim’s late brother, John Belushi, and Dan Aykroyd, The Blues Brothers pre-rolls were introduced last year in Oregon. The pre-rolls will be available in packages of six .25-gram pre-rolls and five .7-gram pre-rolls, as well as a single one-gram pre-roll, to be rolled out across select TGS locations. The first TGS locations to carry The Blues Brothers® pre-rolls will include 470 Malley Drive in Northglenn; 4400 Grape St. and 995 Wewatta St. in Denver; 3179 South Peoria Ct. in Aurora; and 4151 East Kentucky Ave. in Glendale.

“Belushi’s Farm can’t wait to enter into the great cannabis state of Colorado. It will be our first statewide partnership outside of our flagship farm in Oregon,” said Jim Belushi. “The Green Solution is the top cultivator in Colorado and their mission of healing falls right smack in line with the Blues Brothers’ belief in the power of cannabis: music, mischievousness and, as they say in the movie, a Mission from God. We will be bringing our mission, our harmonicas, and the original Blues Brothers music to the stages of Colorado soon. Let’s all celebrate,” said Belushi.

Jim’s work in cannabis is being documented now on “Growing Belushi,” a new series showcasing his Oregon cannabis farm and operations on The Discovery Channel, in partnership with Live Nation. Recognized for his starring roles as an actor, musician, director and cast member with “Saturday Night Live,” “According to Jim” and “The Principal,” Belushi’s Farm currently offers three signature brands, including Belushi’sSecret Stash, Captain Jack’s and The Blues Brothers.

“In addition to his comic and music talents, Jim Belushi has developed an exceptional cannabis product through Belushi’s Farm and we couldn’t be more excited about being the first to welcome them to Colorado,” said Kyle Speidell, co-founder and co-president of TGS. “Jim is a skilled cannabis producer and is involved in everything from farming to production. This isn’t just a celebrity-endorsed brand. He is also a passionate supporter of veterans’ causes, which, as a veteran-owned company, is something that aligns with The Green Solution.”

Having suffered the loss of his brother, John, to an overdose, as well as having experienced his own journey of learning and healing with cannabis, Jim is an advocate for the positive medical benefits of cannabis, including pain management and improving quality of life. He also endeavors to heal the harms of the War on Drugs, serving as an advisor to Last Prisoner Project, a coalition of cannabis industry leaders, executives and artists dedicated to releasing cannabis prisoners and helping them rebuild their lives. TGS has also supported the Last Prisoner Project in the fight against racial disparity in cannabis incarcerations.

Pick-up options are available at all TGS locations, allowing customers to check-out via express windows as well as an expedited retail experience to limit time spent in stores. TGS strictly enforces social distancing measures to keep customers safe, requiring a minimum of six feet between all customers and reminding all staff and customers to avoid direct contact through retail sales and transactions. All customers are required to wear face masks in stores and mandated orders by all counties are strictly followed.

About The Green Solution:

The Green Solution, recently acquired by the nation’s leading MSO Columbia Care, has grown exponentially since its inception in 2010 into one of the top vertically integrated cannabis operators in Colorado. Voted “Best Bargain Dispensary” in Westword’s 2020 Best of Denver poll, the family-founded business is built on a foundation of customer service, education, innovation, product excellence, regulatory compliance and supply chain innovation. Awarded first place for its Supernova Cone and second place for its NectarBee Root Beer in The THC Classics 2020, TGS has remained an industry leader through proprietary technology and innovation, as well as through continually introducing new verticals, including a family of cannabis brands. Continued advancements across the marijuana supply chain and into enterprise technologies keep the company primed for growth. A veteran-founded company, The Green Solution is dedicated to sustainable business operations, financial commitments and community partnerships to support its communities and state. Today, TGS’ infrastructure combined with that of Columbia Care is designed to accommodate dispensary operations at a global scale. Learn more about TGS at www.MyGreenSolution.com or download the (GREEN) Lifestyle App, a quick, convenient rewards and loyalty app developed exclusively by TGS. Follow TGS on Facebook, on Twitter and Instagram.

What began as a meager 43 plants during Oregon’s medical marijuana program in 2015, today Belushi’s Farm encompasses a sprawling and spiritual 93 acres along the Rogue River, playing home to a range of offerings—from Belushi’s Secret Stash, to The Blues Brothers, to Captain Jack’s Gulzar Afghanica, a rare strain from the Hindu Kush region that became known in the ‘70s as “The Smell of SNL,” and now GROWING BELUSHI, an all-new series on The Discovery Channel. GROWING BELUSHI takes Discovery’s audiences inside Jim’s world and shows the incredible effort it takes to build a legal cannabis operation. Having suffered the loss of his brother John to an overdose, and his own journey learning and healing through cultivating cannabis, the farm’s proprietor, performer Jim Belushi, is a proponent of the plant’s beneficial properties across a spectrum of uses. From enhancing joy and quality of life, mitigating trauma and managing pain, to a harm reduction approach and rebuttal of the opioid abuse epidemic, Jim advocates for patient rights and adult-use legalization while empowering newcomers to access the profound spiritual and healing powers of quality cannabis. For more information, please visit: www.belushisfarm.com.