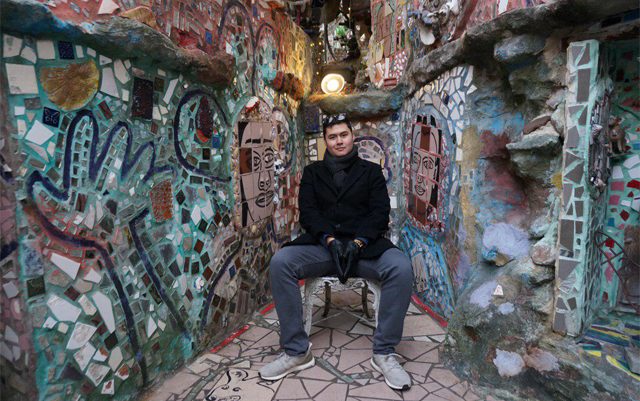 In both capacities, Lepore consistently demonstrates these traits without effort. His passion for the industry and policymaking are abundantly clear. To call his frequent rushes of information a flood would be inaccurate. A deluge would be more fitting. Such is the case of Lepore and others that care that much about the future of cannabis in America.

Full disclosure: I met Ryan through networking in New York City’s thriving group of passionate industry professionals. He also helped get me a job writing for the company for which he is currently the Business Operations Manager, PrestoDoctor. They would be one of my clients for some months.

His presence can be seen at various events in New York City. Often, he will pose questions to guest speakers or snap along in support of issues he is passionate about. Some areas of his interest include equitable measures, sustainable product production and cannabis hyperemesis syndrome, just to name a few.

Lepore’s cannabis journey began at an early age, somewhere between 14 and 16, he wasn’t quite sure when we spoke. He mentioned smoking rather copious amounts of marijuana at the time.

While Lepore is aware of early age use concerns, he credits his early start, in part, in helping to build his base of knowledge for the plant. “It allowed me to think outside of the box,” he explained. Lepore pointed out that a person’s usage should not stereotype them as a failure. “There are so many people that are successful that use cannabis all the time that, even in their teens, that have been successful…it’s all based on the person.”

He also dabbled in selling to friends in high school. The activity would continue into his freshman year of college at SUNY Albany. That would change when he was arrested for possession. The process would open his eyes to the imbalance in the criminal justice system. The half-white, half-Asian Lepore said, “It really showed me that disparity is the way people are treated with cannabis.”

After being cleared, Lepore’s priority was remaining in school to continue his degree in Communication Sociology. After entering into a program for offenders, Lepore was able to stay in school under certain conditions.

The rest of his time in college would further serve as a catalyst to make cannabis part of his career. Some searching and going down conspiracy rabbit holes one day led to Lepore discovering that the government had a patent on medical cannabis, including CBD treatments.

Skepticism in the government would be coupled with grave health concerns for both his aunt and uncle that began between his high school and college years. While many interests serve as drivers for entering into cannabis, Lepore said that his uncle’s cancer diagnosis served as the most significant catalyst.

Lepore also credits Rick Simpson Oil for inspiring him, albeit through a negative experience. His pain could be felt when describing the miseducation people in need, like Lepore’s uncle, have had about medical marijuana. “He never even knew that this is something that could’ve helped him dramatically.”

These motivations would create a college experience where Lepore would be quite vocal and known around campus. A political internship his senior year allowed Lepore to turn his concerns into even more action. He credits the experience with changing his life. He explained the lasting experience he felt in the role.

“I started to see how local government works, statewide government. I started seeing how a lot of the issues we have are actually a lack of people actually participating in the system that we currently have.”

He added that this lack of citizen action is part of what keeps lobbyists and corporate interests persisting. He recalled an experience when an organized group created change in the office he worked at. “Hundreds of people to call us about [an issue]…I couldn’t do my job because we were getting so many calls to do it.” He explained, “It showed me if people participate in these things, you can make a change.”

Lepore would go on to work in the New York State Assembly, first as a Community Liaison in Mount Kisco, and then a brief stint as the District Office Director for Assemblyman David Buchwald. He recalls being on the floor of the state legislature in the early morning hours as medical cannabis was passed.

After politics, Lepore found himself working in the account management, advertising and marketing world. He even considered moving out to Colorado to get into the flourishing legal cannabis industry. However, he figured that New York State would become a hub for the market and opted to stay in-state.

LinkedIn would bring Lepore back to cannabis with a job at the telemedicine company PrestoDoctor, where he has helped the company weather the storms cannabis startups face. For an information sponge like Lepore, the job has been ideal.

Lepore’s passion and drive for developing a fair and equitable cannabis industry have also led him back to advocacy. He has been integral in developing NORML’s New York City chapter, where he serves as Deputy Director. In doing so, Lepore is able to speak to the cannabis concerns of the state’s most populous city while providing insight from the upstate perspective as well.

Looking back, Lepore has no regrets on choosing to stay in New York over pursuing green rush gold out west. “If you’re [in New York City], you’re potentially at an epicenter of what the whole industry is going to look like.”