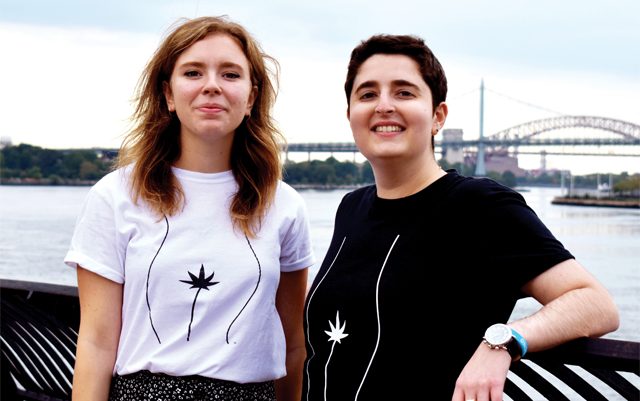 In 2016, Ava Kingsley and Natasha Przedborski were Barnard College seniors in New York City. A conversation with their friend Hannah, a New York University senior, centered on women and cannabis. Namely, the three discussed the need and importance of safe access and consumption for women.

The conversation would lead to a name, PussyWeed™, and a logo. With a few clever pen strokes, a minimalist, eye-catching logo was created. Shirts bearing the logo were soon produced. Selling out in less than a week, the burgeoning brand felt like it was onto something. “We had this feeling that there was something about this that people wanted to start talking about,” said Przedborski.

PussyWeed™ would continue to grow its line of merchandise. Advocacy remained a passion for the founders. Kingsley recalled how they discussed concerns in the cannabis community while the brand took form. Topics often discussed included ending the stigma around cannabis, creating safe spaces for women and ending the drug war, among others.

“The merchandise definitely felt like a vehicle to be advocates,” stated Przedborski. That said, early on, PussyWeed™ focused mostly on growing its line that now includes shirts, accessories, home goods and art. Over time, Kingsley and Przedborski began to shift the brand’s mission as they were exposed to the burgeoning cannabis space. There, they saw the corporatization of the plant, often with leadership being held by wealthy white men.

Meanwhile, in New York City, the plant remained illegal. The two would see friends arrested. They’d read about the ongoing plight minorities in the city faced, with disproportionate arrest rates persisting. While the line remained a focus, PussyWeed™ knew that it wanted to become more involved in creating change. In time, advocacy would take more of an interest. The group would advocate more online and while in attendance at legal and underground events. Advocacy work included urging other brands in the space to follow suit and being more vocal about reform topics.

PussyWeed™’s logo and efforts would continue to earn the brand support and followers – many of whom now advocate for change as well. The founders take pride in creating this young group of advocates, which includes over 500 followers to its newsletter and an Instagram following in excess of 37,000. With the sizable group, the company now focuses much of its efforts on mobilizing young people. They hope to see followers become advocates, emphasizing a need to end the drug war without whitewashing cannabis history.

A growing number of companies have taken up the effort in the years since. It is now not uncommon to find brands advocating for change in and out of cannabis. Internally, calls for women and minority-owned ventures are rather frequent in many circles. Externally, the community has seen significant companies advocate federal lawmakers for human rights reforms, including record expungement for those affected by the drug war.

While the uptick in support is welcome, the founders worry that many fail to advocate beyond a few gestures. While this is a concern to Przedborski, she acknowledges the efforts made by each person and brand. She said,“It’s wild that now you’ll see big companies doing events in New York, and then they’ll donate the funds of the event to the Drug Policy Alliance.” She pointed out that this “is something that would not be happening two years ago.”

Przedborski says New York City feels as if it is currently in an era of information and advocacy. She highlighted other brands, such as Cannaclusive and Tonic, putting together effective outreach and advocacy programs. While these efforts have made an impact in the community, the co-founder wonders if the efforts fall on deaf ears when it comes to lawmakers.

Like many New Yorkers, the co-founders were optimistic New York would pass adult-use legislation in 2019. Now, they consider its future to be too unpredictable to call, though they remain confident that legislation will happen in the not too distant future. In the bill’s failure comes realization, according to Przedborski. “I feel like a lot of people started realizing the importance of federal legalization.”

Realization, she said, came during New York’s struggles as well as Illinois’ legalization efforts. While both states fought to pass laws and create a marketplace, the public became aware of unfair parameters for lower-income individuals. “People started realizing that you are not allowed to access and consume cannabis if you’re part of public housing or receive government subsidies,” Przedborski noted.

The shifting realization of the public coincides with much of what the women behind PussyWeed™ discovered along the way. While positive steps, statewide legalization or decriminalization efforts aren’t fix-all solutions, having such understanding helps reinforce the fact to the public that federal legalization is the only way real change can occur.

Another lesson was learned in New York’s legislative failures, according to the co-founders. The missed opportunity served as a sobering reminder that the fight for legalization has been underway for decades. “I feel like we’re certainly closer now, more so than ever before,” said Kingsley. She added, “But that’s why organizations like NORML have existed for decades.”

The fight for legalization rages on. So too does the fight for equality concerning minorities and women in cannabis. In just a few short years, the goals of PussyWeed™ have shifted to be further a part of these fights. Looking back on that first conversation, the co-founders see a very different cannabis scene than they did when they were about to graduate college.

Despite the fight to end the drug war and its stigma ongoing, PussyWeed™’s co-founders see positive signs for cannabis and women in the space. “I like to remind people that 2016 was a very different cannabis era than in 2019, where now it feels totally normal to be a group of women smoking weed,” stated Przedborski. “But in 2016, I only knew, maybe, two women who openly were consuming cannabis.”