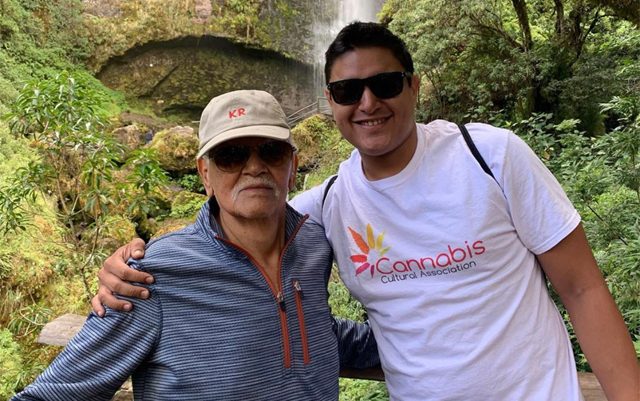 Growing up in Westchester and Somers, New York as a first-generation Ecuadorian-American, Nelson Guerrero’s earliest memories with cannabis weren’t fond. “I grew up in a household where anything referring to cannabis was always considered very negative,” he detailed of his early life in a traditional Ecuadorian household.

Guerrero was raised being told that marijuana was only used by lazy people. The word marijuanero was thrown around often. Like others, Guerrero believed the hype and abstained from marijuana for much of his early life. The anti-drug sentiments would only be heightened by his commitment to amateur sports, like wrestling and basketball. There, he was told cannabis would affect everything from his speed to recovery times.

Like other teens, Guerrero’s view on the plant changed over time. He would consume an edible as his first experience during his senior year in high school. The following year, as a wrestler at Stevens Institute of Technology in New Jersey, he realized how prevalent cannabis use was amongst his fellow athletes. Soon enough, he was using cannabis to treat knee pain and other body parts after matches and tournaments.

By 2013, he was attending City University of New York’s Herbert H. Lehman College, studying Business Administration and minoring in history. For his senior thesis, Guerrero asked what would California’s legal market look like if its original legislation had been approved. He went out to the Golden State to speak with those in the medical space to learn the ins and outs of the market.

It was then he realized the impact the plant would have on California and beyond. Back in New York, he hoped to attend that year’s National Cannabis Industry Association (NCIA) conference, but lacked the funds to do so as a recent college grad. Guerrero decided to try his hand at getting in through other means. He found success by reaching out to NCIA Executive Director Aaron Smith. Smith connected Guerrero with other members at the association, leading to a volunteer role at the event.

He remarked, “That’s when it really was an eye-opener of what the industry can be.” Guerrero also saw the downside, explaining that, “It was also my first experience [with] the lack of diversity in the cannabis space.” He added, “I was definitely the only Latino in the room that day.”

After the conference, Guerrero continued to attend events in and around the city. Not long after, he would meet Jake Plowden, who was active in organizations like Students for Sensible Drug Policy. Over the next few years, the two would work together and separately in the cannabis space, coordinating events around topics from inclusion to entrepreneurship to justice reform.

In 2015, cannabis and Guerrero’s family would come together for the first time under unfortunate circumstances. That year, his grandfather, or abuelo in Spanish, discovered that his prostate cancer had aggressively returned. Treatment would be required. Meanwhile, doctors only gave him six months to live. However, Guerrero’s abuelo, Jorge Gavilanes, opted not to undergo chemotherapy.

Guerrero remembers his grandfather not eating or sleeping during this period. He believed that cannabis may be helpful for his abuelo. The grandson began discussing the sensitive topic with his family. “It was probably the most difficult conversation I had with my abuelitos,” he recalled.

The sensitive family talks paid off. Discussions in 2015 led to action in early 2016, as Jorge began using cannabis tinctures. The family, despite past and possible present reservations, rallied behind cannabis as a treatment option. Guerrero said the results were “amazing”.

The results have sustained thus far. During our call in mid-October 2019, Guerrero said that his grandfather turns 81 later in the month. He had also just attended several soccer games the night before. Guerrero reported that his abuelo is “living the best life possible for [someone with] stage four metastasized prostate cancer.”

As it turned out, 2016 would also be the year that Guerrero and Plowden would take their combined passion for cannabis advocacy to the next level. That year, the two would co-found the Cannabis Cultural Association (CCA), a 501c3 nonprofit organization aimed at supporting disenfranchised communities by getting into the legal cannabis and hemp spaces. For both New Yorkers, they wanted to give back after seeing how destructive the war on drugs had been.

Launching its first event in June 2016, the CCA saw reluctance in communities like Guerrero’s. Held at conservative spaces like churches, Guerrero said he’s been labeled by some as “a mini Pablo” trying to push drugs to the community. That said, the CCA preserved, continuing to educate all ages in both Spanish and English. In 2017, it received its 501c3 nonprofit status.

Today, the CCA is a near ever-present fixture in the New York City community. They include events like December 2019’s Tri-State Cannabis Equity Summit in New York City. However, the duo may be most known for taking part in the 2017 lawsuit against then-Attorney General Jeff Sessions over medical cannabis legalization.

“It’s been really inspiring to work along with my co-founders, to do the work that we’ve been doing here in New York and abroad as well,” said Guerrero of his work so far.

Guerrero’s international cannabis efforts extend to his ancestral home in Ecuador. Both he and Jorge, the elder holding dual citizenship, are active in reshaping the country’s view on medical cannabis and the plant in general. Back home, their advocacy efforts caught the attention of local news and shared Jorge’s story as one of the nation’s first medical cannabis patients. In a country where shame is still brought onto consumers, his story captivated the public and lawmakers alike.

Guerrero says that support continues to grow in both countries. “What we saw in Ecuador recently was just how a wave of people who have been anti-cannabis for many years are now being some of our biggest supporters.”

Despite the progress, Guerrero points to struggles in the Latin community that continue to hinder further participation and support for cannabis. He cites a myriad of longstanding hurdles, from the Catholic church and the uncertainty of working with marijuana after the effects of the war on drugs.

Guerrero hopes that he can continue to educate others through a series of efforts. They include sharing Jorge’s story with the masses. His story is now told in the documentary CannAbuelo: The Jorge Gavilanes Story, which will be released in 2020. The Spanish-language, English subtitled documentary details Jorge’s journey of 20 years with a cancer diagnosis and how cannabis affected his life.

The success of the CCA and his abuelo’s sustained health has validated Guerrero’s efforts back home as it long has in the cannabis space. Today, he reports that his entire family backs his endeavors and next steps. “It’s been an amazing transition to see.”