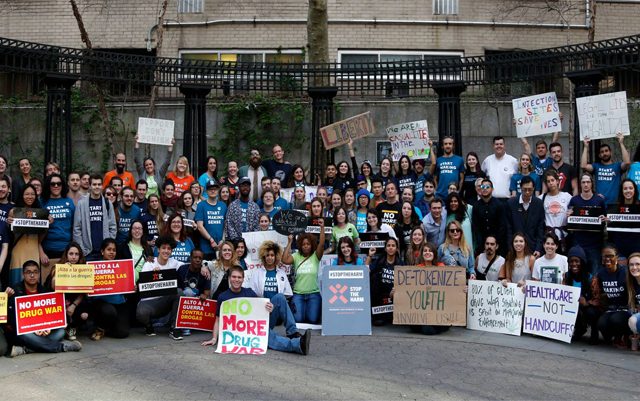 Active around the globe, the Students for Sensible Drug Policy (SSDP) is celebrating 19 years of advocacy as a grassroots network of students and alumni whose mission is to educate, reform, and update communities about the impact of drug abuse. Headquartered in Washington, D.C., SSDP is an active member of the cannabis legalization movement and is a regular at industry expos and events and is hosting a soiree during the National Cannabis Industry Association’s (NCIA) Oakland conference this coming week.

According to SSDP, the War on Drugs is failing our society, that’s why they focus on young up-and-coming students to carry the torch into the new era of cannabis legalization. The organization carries out efforts on many drug-related fronts, but cannabis law reform is a huge part of their objective. For instance, just last month the two founding members of the SSDP Austria chapter marched along other supporters who were handing over a petition with 10,000 signatures to Parliamentary Director Dr. Harald Dossi in defense of sensible drug policies. The petition is regarding the Narcotic Drugs Act (SMG), which would put Austria in conflict with the worldwide trend towards cannabis regulation and outlaw CBD by “styling it as a chemical”.

It’s interesting to note that SSDP neither condones nor condemns drug use. They support the rights of everyone to make their own decisions as to what’s right for their health and use civic engagement amongst the youth to fuel communities around the world to change outdated drug policies and put an end to propagandized anti-drug rhetoric.

The fourth annual NCIA Cannabis Business Summit will take place from June 12th through June 14th in Oakland, California. June 13th will be a busy day for those in attendance as Vicente Fox, Former President of Mexico & President of Coca-Cola Latin America, is slated to speak in support of legalization followed by SSDP’s evening soiree for ticket holders.

As keynote speaker, the Former President of Mexico is going to talk about his support of cannabis legalization in both America and Mexico. Back in 2013, Fox advocated for legalization, saying it’s the only way to end the violence of Mexican drug cartels. “The cost of the war is becoming unbearable – too high for Mexico, for Latin America and for the rest of the world,” Fox once said in a press conference. Fox will also discuss the social injustices created by the war on drugs and the positive effects of global governments adopting cannabis legalization.

The ‘Sensible Celebration’ kicks off at 7:30pm with a screening of Mary Janes: The Women of Weed, featuring SSDP students and staff alongside some of the most hard-working women in cannabis. In celebration of so much sensibility when it comes to cannabis, SSDP promises a dance party in the venue’s outdoor beer garden. Tickets are available and include drink tickets and dessert. The proceeds also go to supporting SSDP’s ongoing efforts to end the harms of drug prohibition.

SSDP holds a dear place in many ganjapreneurs’ hearts. Their work has affected hundreds of thousands of patients, businesses, and consumers, and the Denver cannabis community wants to give back to the organization with the third annual Cannabis Charity Open.

Hosted by High Rollers dispensary and The Hemp Connoisseur Magazine, the July golf tournament’s mission is two-fold. First, they are happy to donate the proceeds to SSDP. Secondly, the annual charity tradition serves to normalize cannabis by linking it to a mainstream sport – golf! All of the proceeds from the tournament will go to charity. Tickets for the Cannabis Charity Open are on sale now and food, drink, and a gift bag are included with a ticket purchase. Teams tee-off on July 27th from 1:00 until 7:30 pm at the Denver Park Hill Golf Club.

This year’s sponsors are rooted in providing education of the health benefits of hemp-derived CBD and medical marijuana. THC Magazine is one of the go-to publications in Denver for the latest on industrial hemp and cannabis, and High Rollers dispensary is a high-end medical cannabis boutique shop in the heart of South Pearl Street in Denver.

High Rollers is all about benefitting the larger community, and in order to help foster a healthy community (instead of just turning a profit), they regularly engage in community-based services like fund-raisers and charity events. For instance, last year’s Cannabis Charity Open brought in more than $2,000 to benefit the Denver Colorado AIDS project. Managing dispensary partner Luke Ramirez explained that the dispensary is a great way to encourage connection within the Denver communities.

“Communities thrive when individuals thrive, and we seek to help our neighbors find balance in their lives however we can – one way we do this is through the healing power of cannabis,” he said. Another way is putting on charitable events like the 2017 Cannabis Charity Open. Ramirez is no stranger to cannabis. Since 2009 he has been actively involved in multiple cannabis trade organizations, lobbying efforts, and advocacy groups. Active in cannabis ventures nationwide, Ramirez also served as a former board member of the National Cannabis Industry Association.

Giving back to SSDP supports their outreach to students who are going to change the way the world thinks about and polices drugs. “Students are at the forefront of the movement to legalize cannabis and end the War on Drugs, and SSDP has been organizing, guiding, and raising the voices of young activists for 19 years,” according to their mission statement. A donation to SSDP mobilizes and empowers young people to participate in the political process, pushing for sensible policies to achieve a safer and more just future.