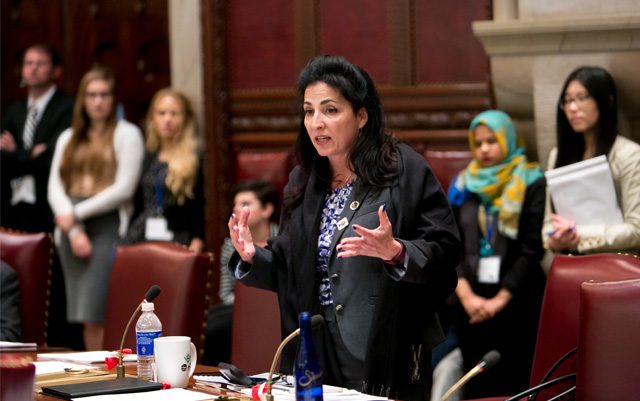 New York State Senator Diane Savino is one of the earliest lawmakers in the state to champion cannabis reform. Senator Savino carried the state’s medical cannabis bill after her predecessor, Thomas K. Duane, did not seek re-election in 2012.

Savino recalled how Duane, the state’s first openly gay member of the Senate – who was also the only openly HIV-positive member – pushed for the bill in honor of those self-medicating to treat their HIV symptoms. “Anyone who’s ever seen anyone suffer from either the effects of cancer or chemotherapy or just chronic pain, you realize the limitations to what modern medicine can provide,” the Senator said. She went on to say, “…why would we stand in the way of people finding treatments that they could live with? So, [supporting the measure] was a no-brainer for me.”

After re-writing the bill to reflect the current climate, Savino was pivotal in passing legislation, which was signed in 2014. Today, the state appears poised to become one of the latest to legalize a recreational cannabis market. However, Senator Savino isn’t so sure it’s a done deal. That said, progress concerning New York’s cannabis access has been rapid in recent years.

In its earlier stages, New York’s medical cannabis program was considered one of the more restrictive in the country. Today, however, it is one of the more progressive markets, which includes becoming one of the first states to allow people with opioid-prescriptions to qualify for a medical marijuana ID.

Getting to this stage was not easy, according to Savino, and she cited Governor Andrew Cuomo’s reluctant support for cannabis. As recently as 2017, he had been calling marijuana a gateway drug. However, Savino noted that Cuomo saw the writing on the wall between public demand and sales revenue. A great deal of back and forth during the 2014 legislative session resulted in a bill which had proponents agreeing to restricted sizes and lengths of the program, as well as limited qualifying conditions and a ban on smokable flower.

Pro-medical supporters did earn clear dates to the program during negotiations. Doing so helped New York open its first dispensary within the quoted time – a feat several states failed to achieve. From there, she said the state began to see the concerns of supporters. The results were limited access for patients and practitioners, while businesses could not operate and left the market.

Since then, the state has opened its access for easier practitioner enrollment, which has allowed for more efficient patient enrollment under expanded qualifying conditions. By Q2 of 2018, 1,718 practitioners had been registered – up from 1,098 the year before, according to a state DOH report. Meanwhile, New York has certified 98,101 patients, adding 23,637 people during that period.

Still, the Senator sees gaps in the program. The biggest, according to Savino, has been doctors. State medical societies, like the Medical Society of the State of New York (MSSNY), consider legalized cannabis a public health concern. In a statement, Dr. Thomas Madejski, President of the MSSNY, agreed that there are medical purposes for cannabis. However, Dr. Madejski added, “Physicians are very concerned that marijuana is an addictive drug that can have significant adverse public health impact if it were to be legalized for non-medicinal purposes.”

While doctors are a problem, according to Savino, nurse practitioners seem more open to medical cannabis. “Nurses just tend to be a little bit more progressive than doctors,” she stated.

When asked if lawmakers are actually supportive of cannabis reform or just going along with the wills of constituents, Savino was unsure. Her uncertainty extended to the legislation itself. “I’m not absolutely certain that we have the votes to pass this yet.” Savino cited potential sticking points for lawmakers. Key points centered on the expansion of the adult-use market as well as issues surrounding traffic, youth access and lingering concerns that cannabis is a gateway drug.

While Savino may have concerns, Governor Cuomo made legalization seem as if it is right around the corner. During his recent State of the State address, the Governor called for recreational reform in the first 100 days of 2019. When asked if this will come to fruition, Savino wasn’t sure of the Governor’s timeline. She stated that “[Cuomo]’s hard to predict whether he thinks something is good or whether he’s just throwing it out there.” She added, “I think he assumed that we can get it done.”

At this time, Senator Savino sees legislation at a different phase. “I think right now people are in that phase that well maybe it doesn’t have to happen in the budget or it’s just not quite there yet. But we’ll know soon.”

Savino doubts that the bill will pass in its current form. One concern could be the Governor’s newly proposed Office of Cannabis Management, which would oversee the market. According to the Senator, its Executive Director would have “an extraordinary amount of power over this program”. This is an aspect of the program she does not see making the final bill. “I sincerely doubt that will remain the case. We’re not gonna give somebody so much power over a public health program, an adult-use program, tax policy and the administration of regulation of something as important as this without having some legislative oversight.”

Other significant concerns could upend the proposed bill’s progress. They include a provision which would allow counties and cities with less than 100,00 citizens to opt out of the program. Savino said that this rule would apply to “basically every county and every city in the state of New York with the exception of Buffalo and New York City.” While Savino supports towns, villages and possibly small cities opting out, some sparse upstate counties not participating could create massive cannabis deserts in New York.

Meanwhile, concerns over taxes and a lack of dispensaries could create additional headaches for the measure. However, Savino believes that the matter is moving in the right direction. This includes inclusive ownership points laid out by Governor Cuomo in his 2019 agenda. Programs and stipulations aimed at prioritizing minorities, women and disadvantaged farmers are currently in Cuomo’s proposal. These measures are likely to include licensing priority and an incubative program. However, no key data points were available at this time to demonstrate the initiative’s goals concerning market share.

As New York State moves towards likely legalization of its adult-use market, Savino sees progress with other significant steps that need sorted. This includes amendments of the state’s penal code concerning marijuana decriminalization. Additionally, the state must send a clear message to offenders that black market activities will be penalized.

With cannabis such a wide-spanning subject, State Senator Savino expects the topic to come up during a series of budget hearings this month. Soon enough, we could have a clearer idea as to when, or if, New York legalizes adult-use cannabis.