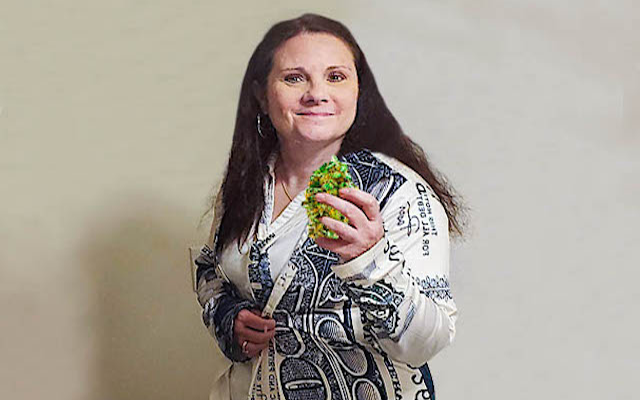 If the longtime marijuana activist Ed Forchion is the NJWeedman, then his business partner, Debi Madaio, is easily Trenton New Jersey’s “First Lady of Weed.”  As the majority owner of NJWeedman’s Joint, the popular marijuana-themed eatery located in the state’s capital city, Madaio is defiantly acknowledging her legacy as a heroic ganga mompreneur during Women’s History Month.  A registered nurse, cannabis activist, mother to two daughters and a special needs son, Madaio is not only the driving force behind NJWeedman’s Joint but also NJWeedman himself! In celebration of Women’s History Month, she has expanded her business with the opening of The Stash Spot, a specialty boutique smoke shop located inside The Joint and a new ‘potcast,’  “Joint Accounts,” closing out Women’s History Month on March 29, 2021 and streaming every following Monday at 3:00 p.m. ET across The Joint’s social media platforms. “Joint Accounts” will feature the latest happenings in and around NJWeedman’s Joint.

The pandemic has fostered all sorts of new innovations, and for Madaio, The Stash Spot and “Joint Accounts” both evolved as such. While NJWeedman’s Joint luckily survived the shut-in as an essential business restaurant operation, smoke shops in New Jersey had to close.  Madaio had the idea to move all her smoke shop items to the restaurant and still meet the needs of her cannabis clientele.  The Stash Spot is the expansion of that service.  With cannabis now finally legal in the state, offering a one stop shop for food and supplies is a convenience her customers greatly appreciate. The Stash Shop carries marijuana paraphernalia like pipes, rolling papers, marijuana themed convenience items, knick knacks and clothing.

Operating a small business while working full time as a registered nurse and caring for a special needs son has been challenging, to say the least.  But Madaio has witnessed and survived additional trials as well.  Located just across the street from the Trenton City Hall, The Joint had been operating successfully since 2015 and was garnering national accolades for its contribution to cannabis culture. It was during Women’s History Month of March 2017 when NJWeedman’s Joint first came under scrutiny per an undercover operation and raid that led to Ed Forchion’s arrest and incarceration.  Forchion’s arrest garnered him 447 days in prison, leaving Madaio not only fighting for his release, but also for the survival of their business.

“While Ed was being held for those 447 days, prior to trial under the New Jersey Bail Reform Act, we had to close the business in order to secure it.  I basically robbed Peter to pay Paul to made sure the rent was paid.  I had made Ed a promise that I would make sure the business and the building were still there when he got out of jail! That was one of his biggest fears, that he would get out of jail and ride by the building where The Joint used to be. I couldn’t and wouldn’t let that happen as Mercer County had taken enough from him already,” notes Madaio.

Today, NJWeedman’s Joint is once again a thriving watering hole for not only Trenton but also the surrounding communities, cities and states.  On any given day, customers drive in from New York and Philadelphia, and drop in when visiting from not only around the country but the world, for their delectable menu of dishes named after marijuana inspired themes and famous celebrity stoners.  Meals like the “Snoop’s Dream,” a fish and grits dish; Willie’s Chillie;  the Kevin Smith Impossible Burger; the “Pothead Sandwich,” fried fish with a shrimp crab relish and sriracha sauce; and the “East Coast Cannabis Coalition,” a turkey meatball dinner with marinara sauce and spaghetti are all the rage.

The restaurant’s ambiance, created by Madaio, mirrors an actual marijuana grow room with curtains, tablecloths and chairs designed and fashioned after marijuana leaves. There are also live outdoor music performances and show offerings which are streamed online for a wider viewing audience.

Madaio has an undergraduate degree in criminal justice as well as in nursing. While currently still working long hours, she envisions the eatery as an outlet which will provide work and income closer to home and nearer her child. NJWeedman’s Joint was once called ‘the happiest place on earth’ by Extraction Magazine and Madaio’s mission is to keep those kinds of vibes flowing.  The Stash Spot, NJWeedman’s Joint and her new potcast, “Joint Accounts,” will continue in service to keep their customer’s energy high and lifted.

“I’m looking forward to one day being done with all drama,” expresses Madaio.  “New Jersey has finally legalized our favorite plant, but now the battle for inclusion in the cannabis industry begins. We know that small businesses and entrepreneurs are getting edged out of this new legal, burgeoning billion-dollar industry. I’m hoping that in exchange for our commitment to good service that our customers won’t allow that to happen to us here.”NJWeedman’s Joint is located 322 E. State St. in Trenton, NJ.  Debi Madaio can be reached at flamingo2b@hotmail.com  and via the NJWeedman’s Joint website at https://njweedmansjoint.com/home