Following an overall successful, non-confrontational protest to deschedule marijuana from the Controlled Substances Act, Washington D.C. pot activists will return to the White House with seeds and clones in tow for the first ever White House Seed Share and Cannabis Summit on Saturday, April 16.

The event has been organized by the same DCMJ grassroots organization that brought the 51-foot inflatable joint in front of 1600 Pennsylvania Avenue on April 2. With the guiding hand from outspoken cannabis activist Adam Eidinger, hundreds are expected to once again gather outside the big white mansion – this time to “keep the pressure on President Obama to use his authority to deschedule cannabis.”

DCMJ is encouraging seed seekers, sharers, master growers and legacy growers to share their commodities so others in the District can grow cannabis, legally, within their own home. Under Initiative 71, DC residents are allowed to grow up to six cannabis plants, with three mature budding plants at once, per person. It’s also legal to carry up to two ounces of marijuana and give it away to other adults in Washington D.C., but organizers warn participants to stay on Pennsylvania Avenue to avoid charges on federal parks and land. 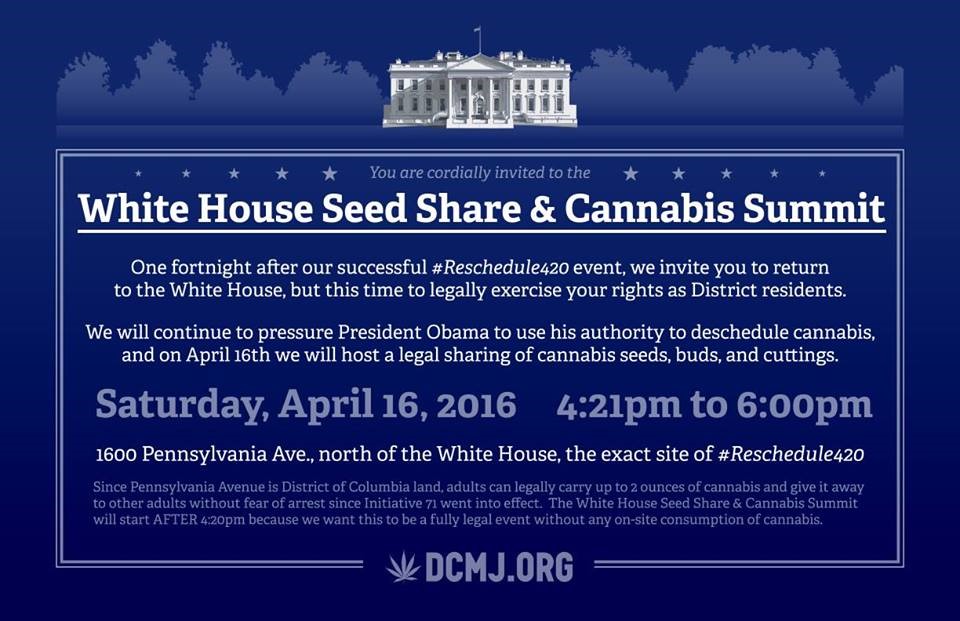 Rescheduling or completely descheduling cannabis is a tall order, experts say. It’s an executive action that would take cross-departmental cooperation within the Obama Administration – an issue for which many political influencers are not willing to use their coveted clout.  Congress, on the other hand, is a much more likely option to make it happen.

Another cannabis community call to action is set to take place this month all along the East Coast. The so-called Unity Cypher is a three-foot tall fake joint that will be passed from Maine to Florida beginning this month to drum up awareness of the challenges marijuana reform advocates still face in the East Coast states.

Organized by the East Coast Cannabis Coalition (ECCC), the Unity Cypher is a rallying call for rescheduling cannabis on the federal level, as well as draw attention to the fight for cannabis on a state-by-state level. “Most of the attention in cannabis policy is focused in the four western states that have recently passed legalization measures,” said Kevin Cranford, Unity Cypher organizer and Deputy Director of Maryland NORML. “With Washington D.C. having legalized, and most of the Northeast decriminalized, the East Coast is not far behind. The tour will highlight that citizens in Eastern states are also ready for cannabis policy reform.”

Related Article: East Coast to Celebrate Marijuana by Passing a Joint through 13 States

DCMJ is using the momentum created by the  51-foot inflatable joint protestors eventually slipped past Park Police. By and large, the fake joint was covered by major news outlets as a remarkable stunt but in most of their coverage, the issue of federal reform was put on the wayside.

In October, over 1,500 seeds were given away at a similar style DC NORML seed and clone share in the Adams Morgan neighborhood of D.C. It’s a type of event that has become semi-regular post-legalization in D.C.

The DCMJ seed share and cannabis summit is set to take place on Saturday April 16 from 4:21PM EST to 6:00PM EST. On Facebook, DCMJ requests the public to refrain from cannabis consumption during this event.