Despite roughly 30 years of activism, marijuana was still illegal in all 50 states when the year 1996 began. But all that changed with the passage of Proposition 215 in California, which legalized medical marijuana in the state.

“It brought the conversation about the medical uses of marijuana out of the shadows and made people start paying attention to the way patients were being treated like criminals around the country,” Morgan said. “I think, in terms of the activist community, it made people realize that reform was possible and motivated a lot of people in other states.”

Steve Kubby was one of the architects of Prop 215. “Unlike so many cannabis initiatives that followed,” he told The Marijuana Times, “Prop. 215 was just one page and focused on rights, instead of rules.” He said there is “no way” the states that followed in California’s footsteps when it comes to cannabis law reform would have been as successful without Prop 215 leading the way.

In those early days, Steve said, not everyone was on their side, even within the cannabis community. 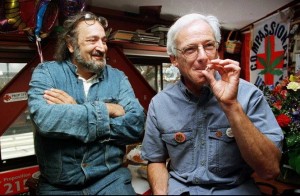 “Jack Herer, Ed Rosenthal and NORML originally opposed us,” Steve told me. “I invited Jack and Ed to come check out our Dispensary at 1444 Market Street.” The rest, as they say, is history.

Since Prop 215 in 1996, over 20 more states have joined the ranks of those with legal protections for medical marijuana patients, but never again were the laws passed as wide open as California’s. Four states and Washington D.C. have also passed laws allowing cannabis for recreational purposes as well.

Since 1996 something else has changed: public opinion. Recent polls show support for legalization is at an all-time high, up some 17 percentage points in just the last 7 years. As marijuana becomes more mainstream the movement has hit several important milestones.

“Every time a law changes that removes penalties for marijuana, it represents a milestone and another step toward national sensible marijuana policies,” Morgan Fox told us. “However, I think some of the bigger milestones were the passage of Prop 215 in California, the passage of Amendment 64 in Colorado which showed people legalization was possible, and the 2014 passage of federal legislation that prevents the DEA from spending money to interfere with medical marijuana in states where it is legal.”

Just since 2010 alone, so much progress has been made. “When social change begins to move, it inevitably gains speed for a time, and surprises people how quickly change can occur,” said Keith Stroup. “We have made more political progress in the marijuana legalization movement during the last six years, than we have made in the prior 40 years. And I think we have not yet reached our peak.”

“It is really incredible to see all the progress that has been made and to think about all the people who have avoided negative legal consequences or gained access to a medicine that works for them in that time,” Morgan Fox said of the last 6 years. “However, despite all this, there is still a lot of work to do, and the pendulum could always swing back if we do not keep up the pressure or if we pass laws that are prone to abuse.”

I know that when I started writing about cannabis issues in 2009, non-medical legalization was seen as something that was much farther in the future. After the loss of Prop 19 in California in 2010, a long wait seemed even more certain. Fortunately activists kept working and these efforts lead to victories for recreational legalization in Colorado and Washington in 2012. That showed the world that the era of cannabis prohibition was indeed coming to an end.

The Future of Cannabis Activism

The future of cannabis activism has the potential to be world-changing. This year alone will see over a dozen attempts at marijuana law reform in states around the country. The victories this year will bring new momentum that activists will build upon to secure victories in the coming years.

For their part, Marijuana Policy Project is focused on a dozen states over the next several years, according to Morgan Fox:

“MPP is devoting significant resources to ending prohibition in 12 more states by 2019. We have already formed campaign committees to raise money for marijuana legalization and regulation initiatives in 2016 in Arizona, California, Massachusetts, and Nevada. MPP is also lobbying and building coalitions to regulate marijuana like alcohol in several states that do not have the option of voter initiatives: Delaware, Illinois, Maryland, New Hampshire, Rhode Island, Texas, and Vermont. In the states where cannabis has not already been decriminalized — Illinois, New Hampshire, and Texas — we are working to achieve that reform first. MPP is also advocating for medical marijuana-related bills in several other states, including Georgia, Pennsylvania, Texas, and West Virginia.”

“Hopefully in that time,” Morgan said, “Congress will vote to deschedule marijuana, removing it from the Controlled Substances Act and allowing states to determine their own marijuana policies without fear of federal interference.”

The history of cannabis activism is ongoing and we are now a part of it. Just this simple act of sharing this story contributes to its overall success. We follow in the footsteps of all the great canna-warriors that came before us and we continue to build the foundation for those who come after us.

And one day the history of cannabis activism will come to an end. Not because we lost and gave up but because it will no longer be needed. There will no longer be a need for people like me, writing stories about the fight to legalize cannabis. It will be a day when cannabis users are free from persecution and stigma; a day when the horrific injustice of prohibition will have been erased.

There was a time when many thought that day was a long way off; now it looks like it may be sooner than we think.

Check out Part 1: A Brief History of Cannabis Activism for the whole story from the beginning.