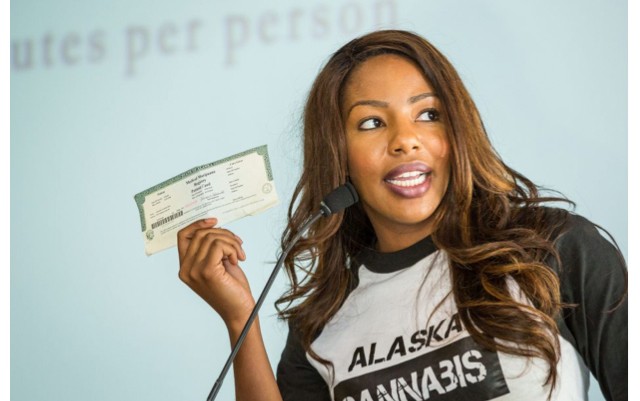 While ganjapreneurs are raking in money and helping patients in the process, legal cannabis still exists in a grey area and can be troublesome for some.

You might remember the former television news reporter in Alaska who dropped the F bomb and quit her job on the air, declaring her support of legal cannabis in her state at the same time. After her glorious exit from TV news, Charlene Ebge, aka Charlo Greene wasted no time opening The Alaska Cannabis Club.

Police then wasted little time raiding her seemingly legal establishment. Why? Same reason police raid dispensaries in Colorado and California. Because their unchecked power tells them that they can.

As empowering, outgoing and inspirational as her exit from TV news and declaration that she’s a legal cannabis activist was, it probably put her on the radar and quite literally opened the door for her business to be raided by police.

“All they said was, ‘Open up the door,’” Greene said Friday. “They busted it in and stormed the place guns drawn, just like back in March.” Greene told NBC’s Anchorage affiliate, KTUU.

Greene also had her club raided in late March, by officers serving a search warrant who seized multiple items from the business. Greene maintains that her business has done nothing illegal and never exchanged money for cannabis. They provide medicinal cannabis to patients in need of relief and healing. The Alaska Cannabis Club gives the medicine to patients in exchange for donations only.

“Here we are being harassed by the state, which refused to stand up and help patients when they needed it,” Greene went on to say. “Now here I am trying to do good, not breaking any laws, and now here they are trampling on our rights.”

“The Alaska Cannabis Club has never advertised exchanging cannabis for donations. ACC has not ever done that, knowing that activity is blatantly illegal and we strive to stay in full compliance of the law,” Greene added.

Greene was not the only one to have her cannabis establishment raided. Absolutely Chronic Delivery Company was raided by Anchorage Police as well. There could be more businesses being raided soon, as cease-and-desist letters have been sent out to six Alaskan cannabis firms, including Greene’s.

Alaska’s Alcoholic Beverage Control Board has been temporarily empowered to regulate marijuana since Alaskans legalized recreational cannabis last year. Despite the legalization, cannabis clubs and cannabis-delivery businesses are still illegal under current state law. This means that establishments will be raided, even if they truly are doing nothing illegal.

What can we do to keep police raids in check? If you’re in Alaska or have friends there, let them know that you won’t tolerate legal businesses having their rights violated like this.