I first met former NFL athlete Gerome Sapp while working on a story about cannabis healing concussions, but I quickly learned that the footballer not only found healing powers in the plant – he also found a way to share it with the world. He does it with his new virtual reality app called Dōs (search Dōs VR in Google play or Apple stores).

Now anyone with a smartphone (over 21) can select a mood and be transported to a virtual reality that will evoke any given feeling. It’s not meant to mimic being high, Gerome said. The Dōs VR app is a cannabis app meant to virtually take you on a journey reflective of any given strain of cannabis. 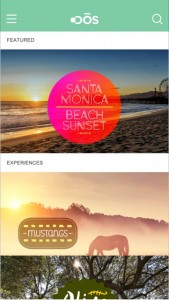 Users can see a Santa Monica sunset or the flirty fountains in front of the Bellagio in Vegas. Unlike YouTube videos and pictures, the app uses 360-degree filing techniques so the user can move the phone up, down and all around to see everything normally out of range on a small screen.

You don’t see this app, you experience it.

It’s in the details. There’s a not huge banner ad or obnoxious marketing pop-up. Gerome described it simply as a platform where companies (for a sponsorship fee) can curate a video library of virtual experiences to evoke the emotions that they want to associate with their particular strain of cannabis. 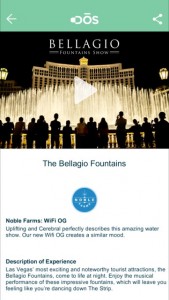 For the Bellagio fountains show, Noble Farms is promoting their Wifi OG strain. They describe what to expect before you hit play: “Uplifting and Cerebral perfectly describes this amazing water show. Our new Wifi OG creates a similar mood.”

It’s not all fun and scenic road trips, though. When I clicked on the ‘A Suicide’ experience I held my breath, unsure of what to expect.

The app puts you in a room with a young woman who is sobbing and saying things like, “I’ve got to get out of here” and “I can’t keep waiting for things to be okay.” Then BOOM. The woman takes out a gun, puts it to her head and shoots. It’s jarring, but according to the Center for Disease Control (CDC), an estimated 9.3 million adults reported having suicidal thoughts last year. Even more disturbing is finding out that 2010 data reveals the third most common reason for it is opiates. The abuse of the legally-prescribed medication has created an epidemic that’s killing an average of 53 Americans per day through accidental and non-accidental overdoses. At the end of the disturbing video is the number for the National Suicide Prevention Hotline. 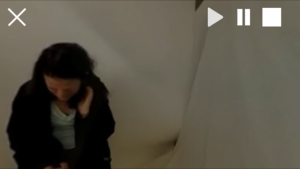 I think there should be some graphic violence warning before viewing the suicide video, especially if you are wearing Google Cardboard, a relatively cheap ($10-$120) and simple apparatus that holds your phone like goggles in front of your face to completely immerse you in the video.

Otherwise, I recommend you check out this new style of app. It’s a new way of marketing cannabis moods and experiences. Try propping your phone up on an angle while cruising past Colorado’s Red Rocks or try to spot the runners on the beach behind you as you look out into the ocean.

“Being able to successfully create a new tech concept feels like I scored the first touchdown of a long game. There are still tons of things to execute and there still needs to be a little luck, but I feel I’m on the right track to winning this new ‘game’ being played in the awesome tech world,” said Sapp. He also hopes that his experiment in the tech space will help to lift the stigmas attached to cannabis and legitimize the plant.

NOTE: If you or someone you know is battling suicide you can get immediate assistance at http://www.suicidepreventionlifeline.org/ or call 1-800-273-TALK (8255). To learn more about the opiate epidemic visit IllegallyAlive.org.