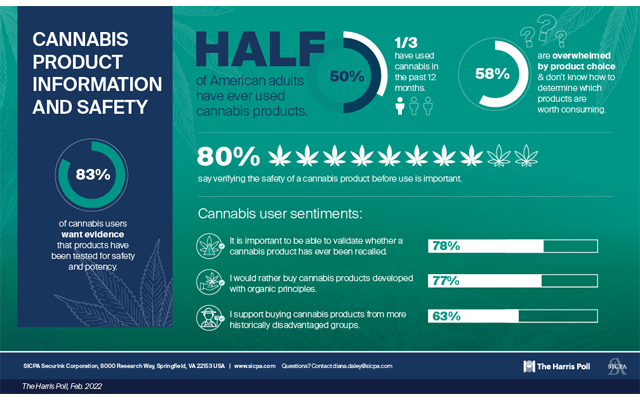 With a patchwork system for cannabis legalization state by state, at SICPA North America, a leading provider of regulatory compliance solutions, we were curious about what expectations consumers have about safety assurances and labeling information on the products they may consume. We thought if there’s a lack of confidence and confusion, it’s helpful for operators and regulators to know how consumers feel so they can take steps to enhance their procedures and improve consumer confidence.

Here’s what we found. Our nationwide study, commissioned by SICPA and conducted online by The Harris Poll among 2,056 U.S. adults, found overwhelming support among cannabis users for more in-depth information about the products they may use. Key findings include:

We were surprised to see that top of mind for Americans was ensuring the safety of cannabis products, with a majority of Americans (83%) of the opinion that in states where cannabis is legal, licensed cannabis producers should be required to use secure labels that can’t be counterfeited on cannabis products to ensure potency and consumer safety. Other findings included:

The transition from cannabis being illegal to legal in many U.S. states brings with it the opportunity for illicit operators to capitalize on the demand without following regulatory guidelines designed to ensure public health and safety. Secure labels ensure confidence at the point of consumption where the health and safety risks of unregulated, illicit product are highest.

And state regulators need to be better armed with efficient and effective ways to manage the rapidly growing industry and ensure patients and consumers access legitimately sourced and appropriately tested products. We were fascinated that a broad appetite exists among Americans for a more tightly regulated cannabis market and they are willing to pay extra for that assurance. We look forward to sharing findings from our next poll in June!