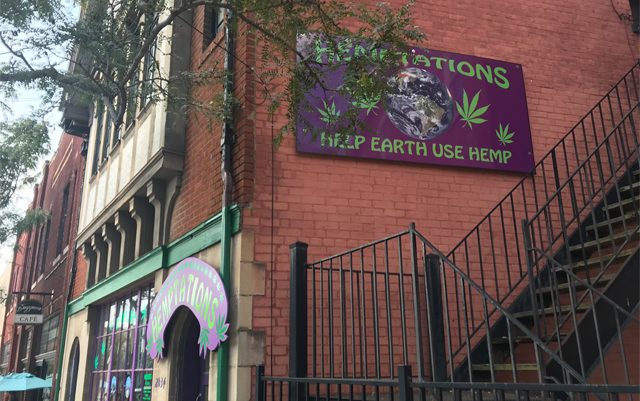 The drama over CBD in Ohio was recently re-ignited as state authorities insist that CBD products are illegal if sold outside of the state’s medical marijuana program. They claim that they make no distinction between CBD derived from marijuana and CBD derived from hemp, and since the state has set up no regulations under the 2018 Agricultural Act regarding hemp, even CBD derived from hemp is illegal unless it’s purchased from a licensed medical cannabis dispensary.

We covered many of these points when this clash first arose back in September. But the issue has resurfaced in local Ohio news after state officials began visiting retailers who sell CBD products and threatening them with “embargos” of their products if they are not removed from the shelves. E.R. Beach owns Hemptations, which sells CBD products and has 4 locations in the Cincinnati and Dayton area. We host The High Noon Hemp Show together on Facebook, and as was the case in September, CBD in Ohio was a big topic on our last episode (full video segment below).

“If you have a license through any state [of Ohio] agency, you are beholden to all state agency policies,” Beach said. “And so the Board of Pharmacy…is actually using other agencies – the Board of Health, the Department of Agriculture, cosmetology, medical – they’re going into these places…and saying you can’t sell CBD, you can’t sell hemp products, basically, they pulled hemp seed from one of the businesses.”

In other words, if you have a license from the state and you sell CBD products, the agency you are licensed under very well may pull that license if you persist in selling CBD products. This goes above and beyond the threats of embargo and seems a bit like extortion. But of course, since the government has a monopoly on the use of force, it’s not considered extortion because the agencies that would stop and prosecute extortion are in on the extorting.

Beach was also on Cincinnati AM radio powerhouse 700 WLW talking about the CBD issue again (video below). Since the Ohio Board of Pharmacy doesn’t distinguish between marijuana and hemp products, Beach said, anything made from hemp is made from marijuana in their eyes and therefore not allowed outside of the state’s medical marijuana program.

And although Beach still sells CBD products at his Hemptations locations, his partner had to cease selling them in her establishment. “We stopped selling CBD at Tohi Spa,” Beach said. “My partner, Mary, has two licenses through the state…she got a warning and instead of risking those licenses and/or the product, we just stopped selling it down there.”

Since Hemptations operates under a local retail license, the other-state-agency threats don’t carry the same weight.

Furthermore, Beach pointed out, there are no CBD products on dispensary shelves and there are only a handful of dispensaries open in Ohio – all in the northern part of the state – which makes the store visits and threats that began in the southern part of the state even more puzzling. The end result is that those who rely on CBD in Ohio are forced to visit a place like Hemptations that is defying the threats, or go online where hundreds of unknown websites sell CBD products and will ship them to your home.

It remains to be seen just how far state officials will go in this round of crackdowns, but the entire saga shows the desperate need for the state of Ohio to set up hemp regulations that are in line with the latest Farm Bill passed in Washington D. C.  Why they have lagged behind the 40 or so states that have managed to do so (Ohio doesn’t even have a hemp pilot program as allowed under the 2014 Farm Bill) is a matter of conjecture, but government incompetence/inefficiency should come as no surprise to anyone.

Perhaps some of the effort expended on trying to take away access to a product that has harmed no one and helps many should be directed at actually getting a hemp industry going in Ohio, one that can make and sell CBD products to anyone who can get use from them. Not only would this create more jobs and enhance economic activity in the state, it would save the resources being used to threaten retailers and embargo CBD products and create a wider range of access for people who benefit from those products.