Abe Gray has been in the news for hot-boxing a police station, embarrassing New Zealand’s drug czar, opening New Zealand’s first cannabis and hemp museum – and now he’s running for Mayor of Dunedin.

For a country known for its green, clean, hippie vibes, it’s not at all 420-friendly and lots of Kiwis blame America’s ‘War on Drugs’ for their government’s disdain for the plant. “We have the super stoner enthusiasm, but there’s a historical lack of movement,” said Gray. Cannabis is a divisive issue in New Zealand, akin to race and homosexual rights in America. 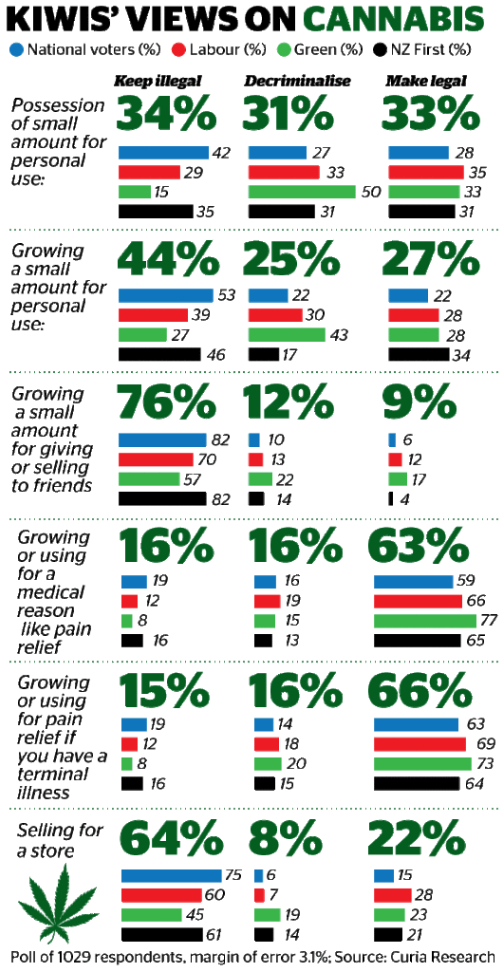 Cannabis was prohibited in New Zealand beginning in 1975 under the Misuse of Drug Act. Only two years after President Nixon formed the Drug Enforcement Agency (DEA), New Zealand was caught in the middle of America and the United Nations’ drug war and the perpetuation of anti-pot propaganda. There’s a great documentary on the history of cannabis in New Zealand called Druglawed.

From the introduction of the documentary:

“22 million Americans have been arrested for marijuana. Only one country in the world has higher arrest and conviction rates: New Zealand. DRUGLAWED examines how New Zealand fell in lockstep with US policies, and shows how smaller countries can break out.”

As it stands, New Zealand’s only medical marijuana available is a mouth spray called Sativex, if you can even get approval from the government. Meanwhile, penalties for possession of cannabis range from a $500 fine to a 2 to 14-year prison sentence.

The government is a constitutional monarchy. Therefore, it’s made up of democratically elected representatives proportional to the people’s vote. As an organizer of many cannabis groups, the largest position Gray currently holds is as President of the Cannabis Party. He would like to see the Cannabis Party have a seat at the table and have a progressive, modern day conversation about cannabis reform.

In an article about his mayoral run in Dunedin, he once said “I’m disgusted by the lack of backbone shown by the Labour Party and the Green Party on the cannabis issue…I feel that Dunedin has been run by an old boys’ network the whole time I’ve lived here.” Leaders such as Gray figure they only need 120,000 votes for 7 members of parliament and thus far, without any real campaign funds, they’ve managed to get between .5 and 1 percent of the vote, as high as 1.7 percent once.

If New Zealand legalized cannabis, it would welcome tourists to another sector of innovation and retail. It’s a way places like Dunedin can monetize on tourism without exploiting any more of our natural resources, Gray explained. It’s a stance he is campaigning on and one he believes would catch on.

“With some of America’s ‘green rush’ funding, we could really make a difference and legalize cannabis in New Zealand,” Gray continued, “It would be great to talk about teaming up to accelerate our reform efforts with a fellow Kiwi like John Lord.”

Lord is owner and CEO of one of America’s largest marijuana businesses. A New Zealand native, Lord moved to America in 1998. He went from a New Zealand dairy to running a multi-million dollar operation.  His company, LivWell, dominates the Colorado cannabis scene with more than a dozen dispensaries and hundreds of researchers, farmers, and cannabis industry experts employed.

In an interview with The Sydney Herald, he says he thinks that growing cannabis is just another cash crop.

“It’s a polarising topic. Other people sell alcohol. Other people milk cows. I grow cannabis. You can turn around and rail on any industry. You can turn around to somebody brewing beer and say: your product causes all sorts of social problems. With cannabis, we are finding way less social problems compared to alcohol and the great Colorado social experiment is proving that.”

Turning Over a New Leaf

Gray, the cannabis advocate and university researcher, has been a Kiwi for 15 years. Originally hailing from Minneapolis, in the early 2000’s he saw firsthand accounts of overzealous police investigations, raids, and arrests. He had to get away. “I saw the progressive step New Zealand took in electing a true Rastafarian to their Parliament,” he recounted. It was at that time he decided, as a teen, to switch from the University of Minnesota to NZ because of the raids and arrests by the DEA. The Rainbow Farm raids were especially terrible, he remembers.

The week he left America was the same time the political pendulum swung out of favor with his ideals. A conservative Christian group, United Future, took the majority and the one condition they put forth under their rule was not to change the laws surrounding cannabis. At that time, the momentum behind cannabis under the Green Party rescinded as they distanced themselves from their pro-pot stance. “It was clearly for political gains, and that’s when the enthusiasm for the cannabis liberation movement at the government level spiraled down.”

Nowadays you’re more likely to find Gray in a TV news interview than a police station. He is repackaging his advocate efforts from civil disobedience to a more nuanced approach that welcomes anti-pot authorities and politicians to learn more about the plant in a non-confrontational situation. But he still embraces a longstanding tradition at his University of Otago campus.

“For 12 years we’ve met on Friday’s at 4:20 to engage in civil disobedience with a smoke-in. Now, we’ve upped it to three times a week,” said Gray. “We could be busted, but each person only has a gram or so. It’s not decriminalized here but due to the support of public opinion, it’s more of a ‘caution’ citation that they issue.”

In true ganjapreneur form, Gray has successfully married his love of cannabis with the bonus of generating revenue for the cause with The Whakamana Cannabis Museum and the museum’s Airbnb. As stated before, tourism stands to benefit in a green rush. The museum is also a source of revenue for their cash-strapped activism efforts.

For only $44 a night, you too can stay in a private guest room located within New Zealand’s only cannabis museum.

Gray also has dreams to move to 3 stories with a night club (no alcohol), a café, and a CBD floor. For $4.20 you can support the museum and have access to it during off hours, and it’s free-flowing cannabis movie nights. The cannabis and hemp museum also serves as the meeting place for many cannabis groups and political action committees. It’s located in Dunedin’s historic Caversham neighborhood.

You can see Abe Gray being interviewed on a local news program on his run for mayor here:

Town in Colorado Might Rename Itself ‘Kush’ in Honor of the Cannabis Industry, Recent Data Shows Medical Marijuana Legalization is Associated with Safer Roads,...