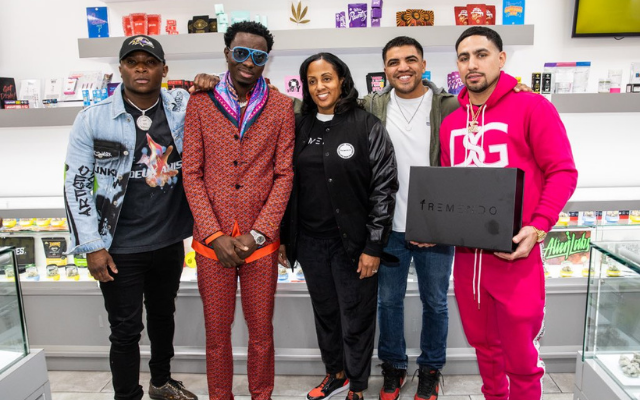 Black people and cannabis have a complicated history. Cannabis was first introduced to the island of Jamaica in the 1800s, brought over by indentured servants from India. The product became wildly popular as it seeped into the United States via Caribbean sailors and immigrants. Enslaved people brought to America from Africa were sent to work in hemp fields throughout the South. Cannabis is woven into the fabric of the Black experience in the United States, for better and for worse.

The “better” is slowly coming to fruition. With more states making medicinal and recreational marijuana use legal, more Black entrepreneurs are entering the cannabis industry. However, as of November 2021, surveys show that only 4.3% of dispensary owners were African-American.

The reasoning behind the slow movement of Black people into the dispensary owner space is multi-faceted. Lack of generational wealth to compete with white business owners and their money, the history of Black men and women being incarcerated for marijuana-related crimes, and the stigma of simply being Black and dispensing marijuana all play a role in holding the community back from thriving business ownership. The shadow of the War on Drugs has not been left in the past — it still looms over many communities — and it affects the upward mobility of Black dispensary entrepreneurs.

If a Black-owned marijuana dispensary is rare, a dispensary owned by a Black female is pretty much non-existent. However, a few of us take on the challenge and “blaze” the trail (pun intended) towards equity in dispensary ownership.

I am an admitted serial entrepreneur, so taking on the cannabis industry as a dispensary owner was not my first business-running rodeo. The cannabis industry is not alone in its failure to provide representation opportunities for women, especially Black women. I approached ownership like I approached my other businesses: methodically and uniquely. I worked my way into being competent in all aspects of the business. I do this because, as a Black woman, I do not have the luxury of making mistakes. To survive in this business, I have to be better than my counterparts in every way, and at all times.

Although I’ve opened my dispensary, that does not mean that the struggle to succeed is over. There are always obstacles, especially with the city of Los Angeles’s officials and the state of California’s government. I’ve dealt with some fantastic employees who work for both, and then you will run across someone who seems dedicated to making it nearly impossible for you to succeed. They don’t care if you have rent to pay or employees to support. They will sit on your necessary paperwork or will not answer the phone.

The bureaucratic red tape makes it extremely difficult to operate with consistency, but I push through. I still run across obstacles every day in this business, but you can’t let those barriers break you or destroy what you’ve built to that point.

With the sometimes-sordid history concerning Black people and marijuana, the barriers against Black people — but particularly Black women — who want to enter the industry are formidable. History has made it nearly impossible for African-Americans to be on an even playing field with other races. A lot of the skills and business acumen required to be successful in this business were not taught to past generations of Black people, and they continue to be failed in terms of education to this day. It begins early on, with disproportionately-poorer school districts translating to failing educational systems. Black people from those poorer districts are less likely to go to college or start businesses. Neighborhood redlining and lack of resources also contribute to the slow trickle of Black people into business ownership.

The cannabis industry takes barriers to entry and kicks the whole concept up a notch. The application process can be complex. The amount of funds needed can easily squash the dreams of any Black person looking to apply for a license. The financial barrier to entry is daunting because of a statistical and systemic lack of generational wealth and robust investments and savings in the Black community. It can cost between $80,000 and $250,000 to open a cannabis dispensary in California, an amount far too rich for the blood of many African-Americans impacted by wealth disparities and the War on Drugs.

When I first applied for my initial two licenses, I was handed an invoice, due in ten days, for over $24,000. That kind of investment can be a pipe dream for many in the Black community, even if they have the skills and the desire to hang out their shingle.

I think the world is slowly starting to see that cannabis isn’t a “Black thing.” It’s a people thing. Cannabis has many positive applications for all people, from pain management, to aiding with problems sleeping, to addressing anxiety. The portrayal of the relationship between cannabis and the Black community that people have seen in the media over the years has painted a picture that is far from factual. It paints the community with a broad brush that keeps them from success in the dispensary industry.

With more Black people, especially women, deciding to venture into this uncharted territory, we are smashing expectations and actively dispelling the mythos built around the Black community and marijuana. We are changing the course of history with every Black-owned dispensary opened.