There are nearly three-thousand marijuana business licenses in Colorado, and nearly a third are for recreational stores and medical marijuana centers.

That’s more places to buy legal cannabis than either a McDouble or a Venti latte.

As cannabis shops and grows try their hand at the crowded market, some just can’t cut it. Those fledgling businesses are surrendering their licenses to hungry entrepreneurs.

The beginnings of cowboy cannabis

There were some hurdles in obtaining their two licenses to grow and sell recreational cannabis in Colorado. Timing is everything, and the duo were looking for licensees willing to hand over the coveted rights to handle the plant when licenses in some areas, such as Denver, were capped.

Their dream of opening a cannabis store suddenly became a rare commodity with a high price tag.

Eventually Surface, the founder and CEO of High West Cannabis, and Sutton, the EVP of Operations, obtained the licenses they were seeking. They also inherited the old grow from the previous cultivators.

Sutton told The Marijuana Times there were some great strains given to them, but they must be sacrificed to ensure the cleanest, most efficient cultivation center.

Sutton is a former school science teacher with a lifetime of experience growing cannabis as a side passion. Under his watch, there won’t be any spider mites or mold at High West Cannabis as he plans to gut the entire warehouse.

In real life, Surface and Sutton are neighbors. They began their cannabis journey experimenting with a decent size home grow. Now they have big plans for their niche cowboy cannabis business.

With the blossoming of the recreational marijuana laws in Colorado, Washington D.C. and Washington State, cannabis is becoming more than a medicine – it’s a lifestyle.

High West Cannabis sees their cowboy and cowgirl cannabis brand bringing back that feeling of excitement and confidence of exploring the ‘new frontier’.

They also want their store to compliment the outdoorsy, Rocky Mountain vibe.

“The mountains here are a staple of Colorado and we want our customers to experience that through our handmade, original art and fresh cannabis,” explained Surface.

The Cannabis company pays attention to detail. They are working with an artist from Nevada with a decidedly ‘wild west’ aesthetic.

Artist Elliott Kolbe specializes in mixed media and printmaking. You can see more of his portfolio on his website.

The recurring image, or at least the inspiration, behind most of his work belongs to his grandfather, Know Johnson, who was a lifelong cattle rancher.

“I have a desire to make something, but I have no formal training besides what my grandma taught me,” Kolbe once said in an interview about his artistic skills.

A lot of the dispensaries are in the city, which can take up to 40 minutes to access after landing. High West Cannabis straddles the up-and-coming Stapleton and Commerce City areas of Denver.

The cultivation center and recreational shop is strategically located close to the Denver airport. It’ll serve as a nice welcome for visitors to the Mile High City that want to experience buying legal cannabis for the first time, sooner than later.

High West Cannabis wants to provide visitors with that 420 experience as soon as they arrive, possibly by picking tourists up curbside from the airport! The company is considering teaming up with a transportation service to make that happen.

Catering to canna-tourists is a smart move, according to industry projections.

In Colorado, the number of canna-tourists is projected to outpace the number of state residents. A study funded by the Colorado Tourism Office shows 8 percent of tourists visited a dispensary; that will result in 5.7 million canna-tourists based on the state’s 2014 data. 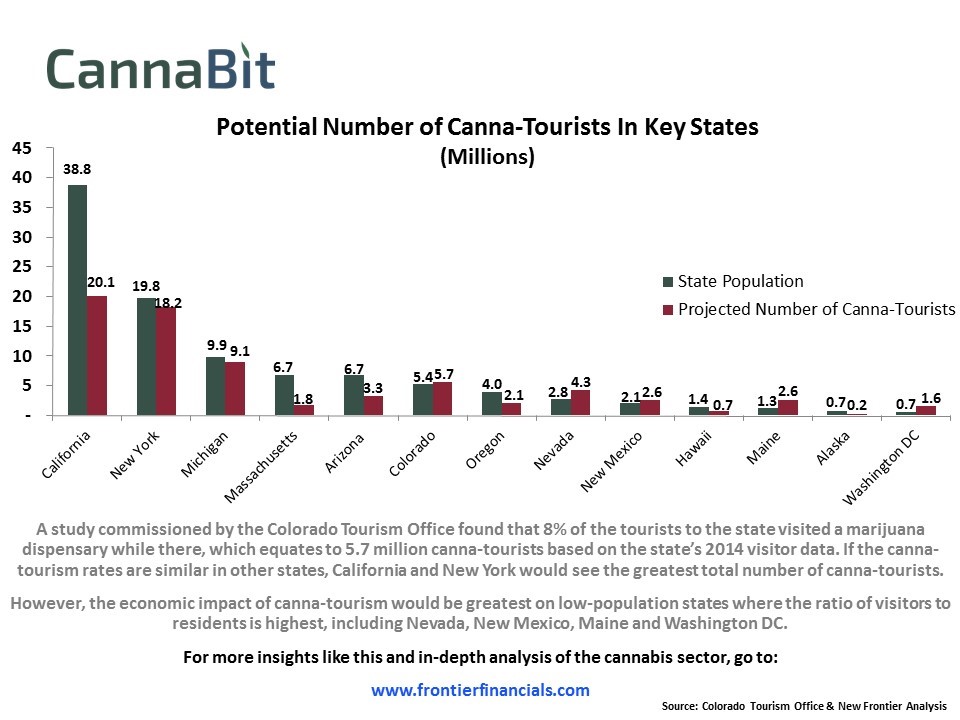 “Our vision is to normalize cannabis as a way to relax – like cowboys and whiskey,” said Surface.

Once they re-vamp their cultivation operations to their standards, they plan to carry their best buds on their shelves. Meanwhile, they are open for business with other taste-tested local edibles, concentrates, and flower.

High West Cannabis is an example of the shift from a medically minded marijuana market to a more commercial, recreational market.

A recent report by University of Denver’s Daniels College of Business reveals most of Colorado’s active licenses are for medical marijuana businesses; however, retail product manufacturing and retail marijuana cultivation are the two fastest growing license categories.

Denver remains at the top of the heap, as the report also finds that the City and County of Denver has over one-third of the active marijuana licenses in the state. Colorado Springs, Boulder and Pueblo also made it to the top of the list.

In a statement regarding his findings, Assistant Professor Paul Seaborn points out the industry’s uncertainties with new recreationally legal states, and Donald Trump as president.

“While the total number of active licenses should exceed 3,000 during 2017, the long-term outlook is unclear,” he explained.

“Some areas of Colorado, such as Denver, have introduced caps on the number of licenses, legalization in California and other states may impact Colorado and there is uncertainty over the incoming federal government’s position on marijuana legalization.”

Another finding which the author finds particularly notable is that while consolidation has begun to occur in the Colorado marijuana industry, even the most prominent brands and operators hold only a small portion of the total licenses, leaving room for determined businesses with a vision, like High West Cannabis.