In a revolutionary spirit, a bipartisan group of representatives and senators just introduced a heap of pro-cannabis bills to change the way the government treats cannabis at the federal level. Specifically, these bills aim to fix the dreaded taxing, banking, and regulating issues.

“The flurry of bills on the Hill today are a reflection of the growing support for cannabis policy reform nationally,” says National Cannabis Industry Association (NCIA) Executive Director Aaron Smith in response to the news.

“Today they’ll be considered champions and in years to come, heroes, for their role in reversing the failed policies of the past.” She continues, “These lawmakers have gone through tremendous effort in their bills, making sure that unfair burdens on legitimate cannabis businesses do not keep the black market alive and rather allow the industry to operate within regulations that restrict access to children and provide a safe product for patients and legal consumers.”

The idea to begin regulating cannabis is well-rooted with the support of a majority of Americans.

A recent poll released by the General Social Survey reveals 57 percent of Americans think the use of marijuana should be legal. That’s up from 52 percent in 2014. 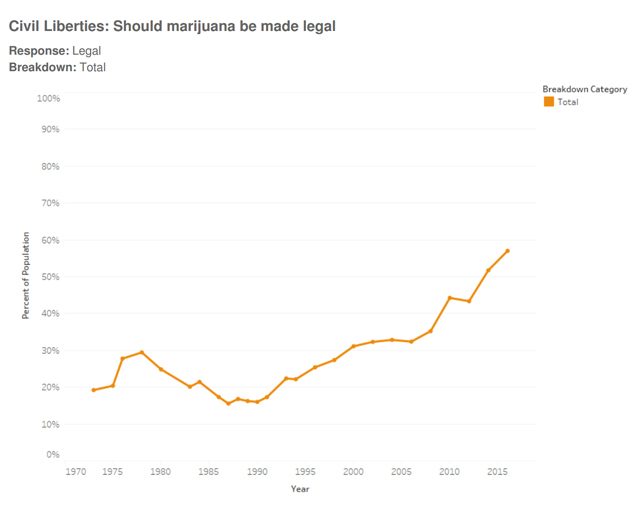 The bills that were introduced have the potential to make huge changes in the way state-legal cannabis businesses conduct their day to day business. The measures deal with issues every cannabis business owner has lamented, since day one.

The titles of the measures are:

“State-legal cannabis businesses have added tens of thousands of jobs, supplanted criminal markets, and generated tens of millions in new tax revenue,” adds NCIA executive director Smith. “States are clearly realizing the benefits of regulating marijuana and we are glad to see a growing number of federal policy makers are taking notice.”

Two elected officials from the pro-pot state of Oregon are among those teaming up to create a path for marijuana. Senator Ron Wyden and Representative Earl Blumenauer are hoping the introduction of three major policy-changing bills will serve as catalysts for cannabis reforms.

Senator Wyden is the Ranking Member of the Senate Finance Committee, and Representative Blumenauer is the Senior Member of the House Ways and Means Committee.

“This three-step approach will spur job growth and boost our economy all while ensuring the industry is being held to a fair standard,” says Sen. Wyden.

“As more states follow Oregon’s leadership in legalizing and regulating marijuana, too many people are trapped between federal and state laws,” Rep. Blumenauer adds. “It’s not right, and it’s not fair. We need change now – and this bill is the way to do it.”

The pair of lawmakers introduced the three pieces of legislation in an effort to ‘preserve the integrity of state marijuana laws and provide a path for responsible federal legalization and regulation of the marijuana industry.’

According to their joint statement, the Path to Marijuana Reform includes the bipartisan Small Business Tax Equity Act, which prevents legal marijuana businesses from getting hit with an unfair tax bill. The package also includes measures to shrink the gap between federal and state marijuana policies and responsibly de-schedule, tax and regulate marijuana.

“The federal government must respect the decision Oregonians made at the polls and allow law-abiding marijuana businesses to go to the bank just like any other legal business,” adds Sen. Wyden.

Cannabis businesses have been stuck between a rock and a hard place when it comes to finances, and ganjapreneurs have been lobbying Capitol Hill for equal access to banking for years.

With cannabis still federally illegal, many banks either refuse them accounts, or they take their account – until it’s eventually shut down or frozen.

Along with nowhere to put their money, they are paying more of their money in taxes than any other business.

It’s an issue they have run into year after year – being unable to deduct business expenses due to Section 280E of the tax code. It’s an addition to IRS standard that has been crippling cannabis business owners. It was meant to prevent any illegal drug business from taking deductions, however, since cannabis is federally illegal, legitimate state-legal cannabis businesses can’t deduct employees’ salaries, among other equipment expenses, and it’s stunting more employment opportunities from this job sector.

Senator Wyden and Representatives Blumenauer, along with Representative Jared Polis, also introduced legislation in both the House and Senate to permit states to establish their own marijuana regulatory policies free from federal interference.

The legislation calls for the following changes:

According to the longtime advocates at the National Organization for Marijuana Reform (NORML), this particular piece of legislation is “another sign that the growing public support for ending our failed war on cannabis consumers nationwide is continuing to translate into political support amongst federal officials.” Their response to the news on the Hill is as follows:

“If we are truly going to move our nation towards sensible marijuana policies, the removal of marijuana from the Controlled Substances Act is paramount. Annually, 600,000 Americans are arrested for nothing more than the possession of small amounts of marijuana and now is the time for Congress to once and for all end put an end to the national embarrassment that is cannabis prohibition. Passing this legislation would end the current conflict between state and federal laws and allow the states to implement more sensible and humane marijuana policies, free from the threat of federal incursion.”

The future of the bills are very uncertain and the industry remains weary. That’s why cannabis leaders, professionals, and advocates must now double-down in their efforts to further normalize the cannabis industry by adhering to state-laws and improving safety measures.

These may not be the bills that shepherd in the new era of national legalization, but it’s a start. No matter the outcome, this is a huge step forward – in getting the attention of Congress, at least.