The long-anticipated and perpetually delayed announcement of the lucky pre-license winners in the medical cannabis state of Maryland has finally arrived. Thirty companies were awarded ‘Stage One’ pre-approvals, 15 growers and 15 processors – and many people are outraged at the underrepresentation of black business owners.

One of the most nationally-known black cannabis entrepreneurs, Charlo Greene, the former-TV reporter turned ‘green media’ powerhouse, sees a huge injustice in the lack of diversity of the Maryland Cannabis Commission selections.

“It’s time we start demanding justice and equality right along with access to medical marijuana and making it clear that if we don’t get what we need to save our communities, no one gets access to this life-saving medicine,” said Charlo Greene in an exclusive interview with The Marijuana Times.

Prime for leading his company to success in Maryland’s cannabis program was Darryl Hill, a former athlete and businessman who’s been called the “Jackie Robinson of Southern college football”. The trailblazer was the first African American to play in any of the southern athletic conferences. Hill was looking forward to a competitive field in Maryland’s cannabis industry, until his company’s bid fell short.

“What’s happening in Maryland is unacceptable but it shines a light on what’s been happening around the country: arbitrary rules and regulations that have no affect on the safety of the community are being used to lock black and brown people out of the industry,” said Greene.

From seeing a list of the leaders of the companies selected, you would never know that Maryland is fortunate enough to have the largest population of black residents than any other state with legal cannabis – about a third of the population.

Greene has made it a pillar of her cannabis efforts to give minority communities, which have suffered disproportionate injustices, a place in the new legal cannabis landscape.

“The only way things will change is if we use our collective power to show black lives and futures matter just as much as the lives of sick white kids,” explained Charlo Greene.

As time passes the following companies will all take their turn in the spotlight of Maryland’s medical cannabis stage. The pre-approvals are not final, and there is room for a couple more companies to score a license. 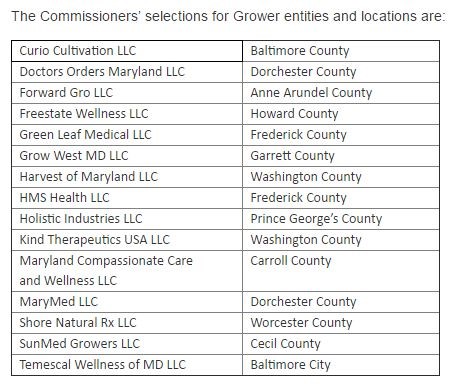 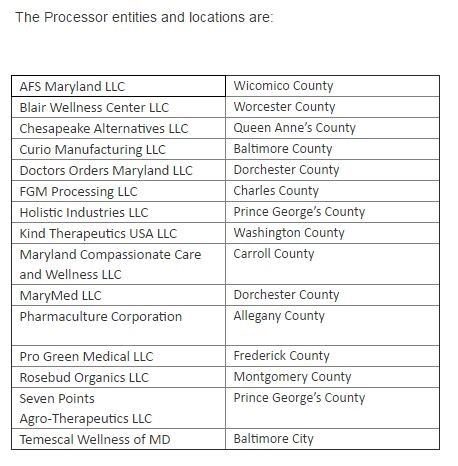 The Maryland Cannabis Commission announced they would be awarding their dispensary licenses in January, and the opportunity for future processing and cultivation licenses – if the process is opened up again due to market demands.