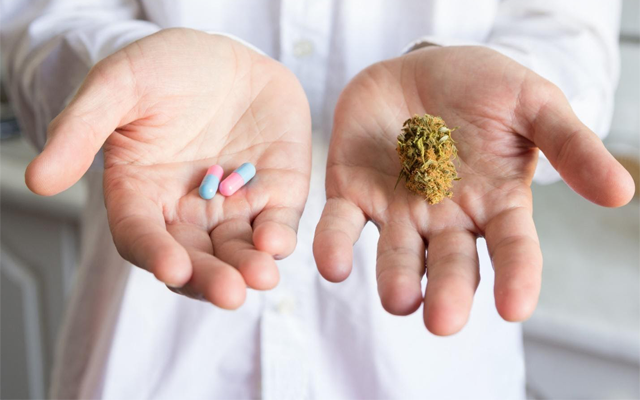 About 85% of American adults support the legalization of medical marijuana. Most people appreciate the benefits of marijuana despite the controversies surrounding its use. Medical marijuana often stirs emotions among researchers, policymakers, scientists, doctors, and the public.

Should it be legal? How effective is it? How does medical marijuana help patients with chronic health issues?

These are among the questions arising with the mention of cannabis. Several studies have proven that medical marijuana has significant health benefits. The different cannabinoids in marijuana have diverse impacts on the body.

If you have been wondering how marijuana helps patients, keep reading our guide. We have explored medical marijuana in-depth to demystify its use in promoting good health.

Pain relief is arguably one of the reasons many people use medical marijuana. The scientific evidence on the effectiveness of marijuana is quite substantial. NASEM released a report after researching the health impacts of cannabis. Pain relief was the primary benefit of marijuana.

The NASEM report stated that marijuana reduces pain by 40%. Some of the patients who benefit from cannabis include those struggling with;

Cannabis-based medicines such as Sativex have undergone multiple tests. Researchers have established their effectiveness in treating cancer pain and sclerosis. Some European countries and Canada have approved the drug. From these studies, it is evident that medical marijuana plays a significant role in addressing chronic pain.

Marijuana has significant impacts on the limbic system. At times, doctors prescribe marijuana to treat mental and neurological conditions. Some of the mental conditions treated using medical marijuana anxiety, depression, and PTSD.

Cannabis has gained wide popularity due to its ability to calm chronic tension and lift low moods. For people suffering from anxiety, medical marijuana has unmatched calming effects. It is gaining prevalence in the treatment of post-traumatic stress disorder.

While data on the impacts of medical marijuana is still sparse, there have been small surveys and studies hinting at this drug’s benefits. Participants in these studies have shown significant improvement in the symptoms.

One of the setbacks with the use of cannabinoids is the development of resistance. With frequent use, you might have to increase your intake to get the desired results. You can read this article to know how to go about tolerance break. The article discusses more about tolerance break when using medical marijuana.

If you’re wondering how does medical marijuana helps cancer patients,’ you’re not alone. Researchers are still investigating the use of medical marijuana to treat cancer. Organizations have allocated resources towards continuous research on marijuana and cancer.

Today, the proven medical benefit of cannabis for cancer patients is the management of symptoms. Marijuana also relieves the symptoms of chemotherapy. It has antiemetic properties that help to alleviate nausea in cancer patients.

Medicines such as Nabiximols from cannabinoid have been useful in addressing pain. The drug has undergone several stages of clinical trials. Patients take the medication orally to ease the cancer pain. It further addresses other symptoms associated with the disease.

Recently, researchers reported that cannabinoids such as THC and CBD have been slowing cancer cells’ growth. Several animal studies have further shown that some cannabinoids have been reducing the spread of cancer. Note that medical marijuana shouldn’t be a substitute for cancer medication. In fact, it would be best to consult with your doctor to avoid any contraindications.

One of the conditions for medical marijuana use is inflammation. Cannabis is a known anti-inflammatory. Besides taming inflammation, marijuana further treats several ailments causing swelling.

Cannabis is used on patients suffering from inflammatory bowel diseases such as Crohn’s. Other anti-inflammatory drugs and steroids have side effects such as muscle weakness. NSAIDs for inflammation can lead to stomach pain, which might escalate to ulcers.

With cannabis, you don’t have to worry about excessive side effects. At most, you’ll experience increased hunger, enhancement of senses, and dry mouth. Decreased inflammation will improve your overall wellbeing.

Sleep plays a crucial role in our overall health. A night of good sleep allows one to relax, feel refreshed and recover. Unfortunately, 35.2% of all American adults don’t get the recommended sleep.

Insomnia is a real menace among many adults, especially with old age. The treatment options available are not adequate for people with sleeping problems. The existing ones often cause tolerance with continued use. These side effects have made marijuana to gain popularity as an alternative treatment for insomnia.

Marijuana has relaxing effects that induce sleep. If you’re suffering from pain that’s limiting you from quality sleep, medical marijuana can help. However, it’s vital to visit the hospital for an assessment as insomnia might be a symptom of an underlying condition.

If you’re new to using cannabis, choosing the right one to treat, insomnia can be daunting. Using too much THC can keep further deteriorate your sleeping problem. It would help if you got the right dose for you to enjoy longer, uninterrupted sleep.

Medical marijuana has been shown to reduce seizures among adults and children in different studies. However, the use of this drug to treat epilepsy has garnered debates over its effectiveness. Recently, the FDA approved Epidiolex, which is a plant-based CBD formulation to treat seizures.

The drug treats epilepsy syndromes; Lennox-Gastaut syndrome and Dravet syndrome. This is the first FDA-approved medication for the treatment of seizures. While research on cannabis and epilepsy has been scarce, the few studies available show the effectiveness of medical marijuana over traditional therapies in treating epilepsy.

If you want to consider medical marijuana for epilepsy, it would be best to research how to get a medical marijuana card. Your doctor can guide you on the same, depending on the laws in your state associated with the use of medical marijuana. The correct use of this drug is likely to improve the frequency of seizures and their severity.

Contrary to common belief, smoking marijuana can benefit your lungs. According to a recent article by the Journal of American Association, casual pot smokers are likely to have better performing lungs than non-smokers.

Researchers state that occasional use of marijuana can increase the lungs’ rate of airflow and improved lung volume. The volume, in this case, is the total amount of air one blows out after taking a deep breath. The studies conducted show that smoking marijuana has been improving pulmonary function.

Tobacco smokers, on the other hand, experience poor pulmonary function over time. Most people relate smoking with adverse health impacts; for cannabis, the effects are quite different. It is crucial to seek medical consultation if you’re having lung problems, as medical marijuana shouldn’t be used as a substitute. Walk with your doctor to ensure that you get the best care.

Alzheimer’s disease is a type of dementia common as one age. It affects millions of people worldwide, and it could double in the next two decades due to the growing life expectancy. The disease is incapacitating. It is characterized by deteriorating mental and cognitive abilities.

The pharmacological research conducted on the treatment of Alzheimer’s disease hasn’t borne significant results. The neurodegenerative process related to the disease continues to advance. There has been an alarming need to get effective therapeutic options as the cases of Alzheimer’s disease keep increasing.

Multiple sclerosis is among the degenerative conditions affecting the nerves. Medical researchers are yet to establish a cure for this disease. However, several treatment options have been shown to curb its progression.

Symptoms associated with multiple sclerosis are quite debilitating. The National Multiple Sclerosis Society has embraced the use of medical marijuana to address some of these symptoms. You might want to get more information on how to get a medical marijuana card state by state, as not all states would approve its use.

Medical marijuana doesn’t address most of the cognitive symptoms related to multiple sclerosis. It would be best for a caregiver or patient to understand the symptoms to know how to incorporate medical marijuana. Notably, most researchers recommend using marijuana in spray form or orally as smoking might not be beneficial.

Glaucoma affects about 60 million people worldwide. The primary open-angle glaucoma is one of the most common types. It destroys the cells in the retina, leading to the degradation of the optic nerve. Doctors have been using drugs and surgical options to address this condition, which becomes acute as it progresses.

Recent clinical studies have shown the impacts of cannabinoids in reducing intraocular pressure, similar to most common glaucoma medications. You can administer the cannabinoids intravenously, by inhaling, and orally. A single marijuana dose can maintain the reduced IOP for up to four hours.

For the elderly or people at a high risk of cardiovascular illnesses, marijuana might not be an ideal medication. Your doctor can advise you better based on your overall health conditions. The last thing you’d want is to escalate the symptoms by misusing the cannabinoids.

Hepatitis C is a chronic liver infection that can result in liver cirrhosis if left untreated. If your doctor has diagnosed you with hepatitis C, you might be wondering about the possible treatment options available for you. Medical marijuana can have significant impacts on your treatment journey.

Note that using pot alone will not treat hepatitis C. It is a complementary treatment to the medications prescribed by your physician. Medical marijuana helps to relieve pain and elevate moods among patients suffering from hepatitis C. The relief you get plays a critical role in your healing and recovery.

The anecdotal and scientific evidence confirms that medical cannabis is effective for hepatitis C patients. Those suffering from nausea, decreased appetite, and pains can benefit from pot. The best part is that the side effects are quite manageable. These side effects mostly manifest as euphoric mood changes.

It is crucial to understand some of the best marijuana strains that you can use to treat hepatitis C.  For pain and inflammation, indica strain is the best. It has high THC that acts as a sedative for peaceful rest. Other strains are ideal for relaxing.

Parkinson’s disease is a permanent and progressive condition affecting the nervous system. It leads to slowed cognition and stiffness over time. Posture changes and tremors are some of the typical symptoms of Parkinson’s disease.

Marijuana is a possible alternative for the treatment of Parkinson’s disease. For PD, marijuana helps reduce tremors, improve sleep quality, enhance moods, and relieve pain. The benefits result from the analgesic and muscle-relaxing effects of marijuana.

Some patients prefer the minor side effects related to marijuana as opposed to the implications of PD drugs. Research on the possible consequences of medical marijuana on Parkinson’s disease is ongoing. It would be best to jump on the bandwagon once you’re certain of the implications.

How Does Medical Marijuana Help Patients?

Marijuana has properties that make it a complementary medication for several health conditions. It’s popularly known for pain management.

However, its health benefits go beyond relieving pain; it addresses several conditions. It would help to walk with your doctor even as you consider this complementary treatment.

Our site is ideal for patients considering the use of medical marijuana. It has a gallery of vaporizers and accessories that will guide you when vaping. Keep exploring for more.