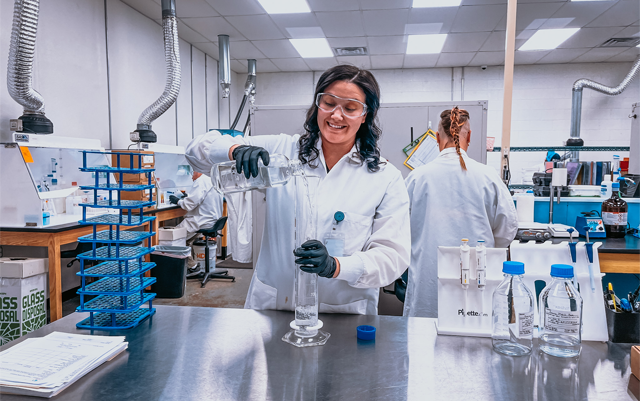 Headquartered in Snowflake, Arizona, a locale where agribusiness and education dominate employment, OnPoint Labs offers advanced-level job opportunities in the STEM field. The Company provides jobs for 47 employees, with 22 being highly-skilled scientists and technicians earning high and upper-middle income salaries. Before cannabis was legalized, these types of jobs were not readily available in rural Arizona locations. OnPoint Labs is now providing an option and training in this growing industry.

In the past decade, the tech sector has served as a catalyst for economic advancement and improved standard of living. According to a recent Newsweek article, the $2 trillion industry supports more than 12 million American jobs. But despite 15 percent of the U.S. workforce living in rural areas, these communities only hold five percent of national technology jobs.

OnPoint Labs has provided an outlet for many rural residents with science backgrounds to advance their professional careers.  Many current employees were overqualified at their previous positions due to lack of tech investment in the area. Maria Olsen has a bachelor’s degree in chemistry and was working at Walmart prior to securing a job at OnPoint Labs. Olsen is now an Assistant Analyst making more than double the salary of her previous position.

“Finding jobs that align with my degree is difficult in our town. I’m now able to apply my skill set with a company that fulfills my passion for science,” said Olsen.

It’s not just the highly specialized job seekers that are finding career paths in the industry. Sarah Cissom, a single mother and recovering addict, was having a difficult time securing employment in a small town. Her determination to make the best of her situation led to a successful interview at OnPoint Labs. Cissom is now one of the Company’s most valued hires and on pace to make close to $50,000 this year.

“Before my current role, I had never worked in a scientific lab, but am so thankful for OnPoint’s training and insight to this incredible industry. I am leading a better life now because of this job,” said Cissom.

Another problem that rural STEM businesses face is the lack of available housing to recruit qualified employees. OnPoint Labs now rents four different homes for key employees and has paid for team members to stay at local hotels for extended periods of time until they can secure housing. By having this option, OnPoint Labs is able to secure top talent when not available in Snowflake.

As an early mover in the cannabis market, OnPoint Labs has gone through significant expansion in the past year. Operating out of an 8,000 square-foot laboratory outfitted with state-of-the art equipment, the Company is the largest laboratory in Arizona and serves over 65 customers.

OnPoint Labs plans to hire an additional 18 employees in the first half of 2022 to support its recent investment in redundant testing apparatus and keep pace with the fast-emerging recreational market in Arizona.