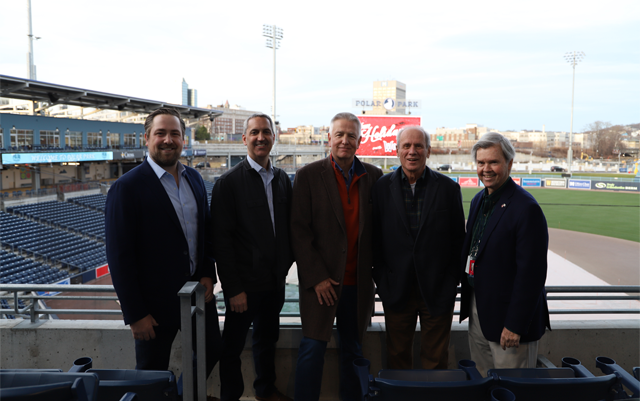 Green Meadows, a cannabis company based in Southbridge, Massachusetts, has agreed to a three-year marketing program for the area surrounding Polar Park. The branding campaign features 60 light pole banners around the ballpark, which is home to the Worcester Red Sox baseball team. The banners feature the Green Meadows logo and will be displayed year-round.

Green Meadows will also host a series of veterans’ initiatives with the support and cooperation of the WooSox Foundation, the philanthropic arm of the Worcester Red Sox. The first jointly-sponsored event was the Annual Veterans’ Dinner, which was held this past November at the DCU Club in Polar Park and was attended by more than two hundred veterans.

After hosting a Cannabis Roundtable Discussion for industry experts and state and local lawmakers in March, Green Meadows is planning a series of veteran outreach events to be held at Polar Park later this year. The upcoming occasions, due to be held in July and October, will create an opportunity for veterans to access a wide array of important veteran services, including health, dental, and substance abuse care, as well as employment, legal, and housing services. The 7th Annual Veterans Day Dinner will be sponsored by Green Meadows and hosted again at Polar Park on Friday, November 11, 2022.

“Our values are rooted in positive social engagement, particularly within the veteran community. Our commitment is self-evident, given that Green Meadows is owned and operated by the Patton family,” said Rob Patton, Chief Marketing Officer. Patton, who co-founded the company with his brothers and father, is the great-grandson of the famed World War II general. “We connected with the city and the WooSox last year, and we quickly learned that we shared a lot of the same values, particularly when it came to supporting veterans. We are looking forward to expanding our mission and identifying ways to further those values together.”

“The WooSox Foundation is pleased to continue the tradition of hosting local veterans for a meal in honor of Veterans Day in collaboration with Green Meadows, and we look forward to future opportunities to work together in support of those who have served our country,” said Mike Lyons, Community & Corporate Partnerships, Worcester Red Sox.

History of military and veteran support

Green Meadows is owned and operated by descendants of WWII General George S. Patton. Green Meadows is founded on the Patton family’s heritage of veteran advocacy, community service and organic agriculture. The Patton family’s support for military veterans dates back generations. It grew stronger considering the difficult experiences and related burdens of post-traumatic stress disorder (PTSD) endured by many veterans of the recent Iraq-Afghanistan era.

George S. Patton IV, father of Green Meadows chairman Bob Patton, founded Green Meadows Farm as an organic fruit and vegetable farm after retiring as an army major-general in 1980, where he named its fields for soldiers who lost their lives under his command in Vietnam. Combining his devotion to organic, sustainable agriculture with the medical potential of cannabis for veterans and others was the original inspiration behind the family’s cannabis venture.