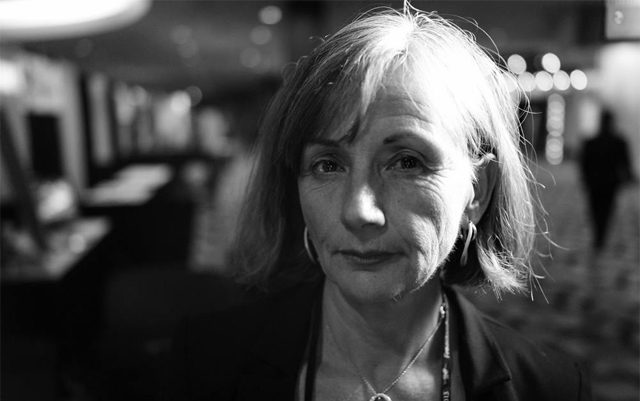 Advocates for an end to cannabis prohibition come from all walks of life, all age brackets and from every kind of occupation. But when it comes to bringing the message of cannabis legalization to mainstream America, few advocates carry more clout than those who come from the ranks of law enforcement.

That’s why the organization LEAP (Law Enforcement Against Prohibition) is so important. Members of LEAP can’t be dismissed as just some burned-out hippies who want to eat Cheetos and smoke legal weed. They have been on the front lines of the War on Drugs. They have seen first-hand the effects of these destructive policies and now feel the need to speak out against those same policies.

Diane Goldstein is a speaker for LEAP and spent over 20 years in law enforcement, retiring as a Lieutenant Commander for the Redondo Beach, CA Police Department. She was a highly decorated officer whose views on the drug war gradually changed as she moved up the ranks and saw the failures of what law enforcement was trying to accomplish.

I recently got a chance to talk with Diane and I asked her about her career, her thoughts on prohibition and more!

Diane Goldstein: I wrote this article back in 2013 for Ladybud Magazine. I think this answers this question.

My mother was born in Mexico City in 1940. She attended an all-girls Catholic boarding school until she was 17-years-old. She was a child bride at 18, leaving her parents’ home to move in with my father, and had all her children before the age of 24. As her cultural experiences influenced her, so did the conservative era of the 1950s and 1960s in Mexico. I don’t ever remember a conversation about boys, sex, alcohol or drugs. This was not uncommon in my neighborhood or among my group of friends. As all children do when left with an informational vacuum, we found out on our own.

Needless to say, I was not an angel growing up. I was fortunate to have spent my formative years when law enforcement viewed teenage experimentation with alcohol or drugs as a “rite of passage” best handled by parents, the school or medical professionals. And, like President Obama, many other politicians, and many law enforcement officers I know, we survived our youthful indiscretions without stigma, criminal histories or other consequences that would forever alter our lives.

MT: Why did you become a police officer?

DG: Policing for me was happenstance, just as my work for LEAP was. I was in college and I wanted to be an attorney. The restaurant where I waitressed was a stop for many police officers and I was exposed to many different police officers of whom I asked this question. Each of them stated that they wanted to make a difference.

In trying to define what that meant I went on a ride-a-long and recognized that the profession could pave a way for me towards law school and that I would enjoy its challenges. I was hired in 1983, in what I described as the second generation of the vanguard of women in law enforcement. My experiences as a police officer lead me to LEAP.

MT: What made you change your mind about the drug war? Were there specific instances or was it a gradual change from many incidents?

DG: It was a gradual change that included the evolution of policing, my brother’s death who suffered from both mental health and substance abuse, and the recognition while supervising a narcotics unit, that no matter how many drug users or dealers we arrested that we didn’t impact the drug trade and the violence associated with it.

MT: Were you around other officers who began to see the failures of the drug war before you joined LEAP?

DG: This issue is pretty complex. From a policy perspective there have always been discussions on how agencies deploy their resources. For many officers I knew working homicide units or other core policing assignments we recognized how the emphasis on drug enforcement conflicted with other policing priorities.

MT: Why did you join LEAP?

DG: I joined LEAP in October of 2010 during the Proposition 19 Campaign after watching Judge Jim Gray debate a police chief in Orange County. For me it was clear that the enforcement of our drug laws have contributed to the worsening of police community relations. The drug war has changed us from being Peace Officers and working with our communities to policing people.

I have written extensively about the collateral consequences of our drug policies. From Ferguson to the death of Freddie Gray and many others, and now the schism of the Black Lives Matter versus Blue Lives Matter; I, like many others in LEAP, feel we have a moral obligation and the ability to help fix American policing.

MT: Have you been surprised by the gains of the marijuana law reform movement over the last 4 years? Do you feel nationwide legalization is inevitable?

DG: I would actually go back to 2010 post Proposition 19. I would say yes and no. What drug policy reformers have done in the last six years, not just around the issue of marijuana but the entire drug war, has been facilitated by marijuana reform. I am fairly optimistic that within 10 to 15 years every state will either be an adult consumption state or a medical marijuana state. Yet, I would caution reformers and the industry that they can’t let up. Kevin Sabet and Smart Approaches to Marijuana (SAM) just announced that they have two million to oppose campaigns across the nation.

MT: What has been most rewarding about being a part of LEAP?

DG: When I receive messages like this (below). LEAP, I believe, has the ability to bridge the relationship between the police and communities that they serve. We can create safe space like cannabis activists have with politicians that allows police officers to be able to admit to the failings of the drug war and to help change laws and policies that are based on harm reduction and human rights. 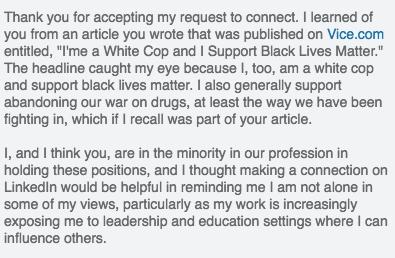 MT: What’s the number one misconception you have found other people hold about cannabis?

DG: LEAP does many presentations that include voting groups, business groups and Rotary’s. Today I am still amazed that I get asked about the debunked ‘gateway theory’ question at each event.

MT: Do you have any projects you’re working on or big events coming up that you’ll be attending?

DG: Personally I am in graduate school at UC Irvine currently, but my main focus with LEAP is the AUMA campaign, the reform of civil asset forfeiture (SB 443) in California, and my work in mass incarceration and harm reduction that now includes the Orange County Needle Exchange Program (OCNEP). I have been fortunate to have met and continue to work with many unsung heroes that are changing our failed drug policies and our criminal justice system. It’s their encouragement that keeps me moving forward.

People like Diane are critical to the cannabis law reform movement. They have been on the front lines of the drug war and are now on the front lines of the effort to end that war. Because of her 20 years in law enforcement, Diane’s expertise and motives are unassailable, which allows her to grab the ear of those who hear her speak. She can cut to the heart of the problem without having to explain where she’s coming from.

She has seen the failures and is now reporting the truth to those who have not seen those failures up close and personal.