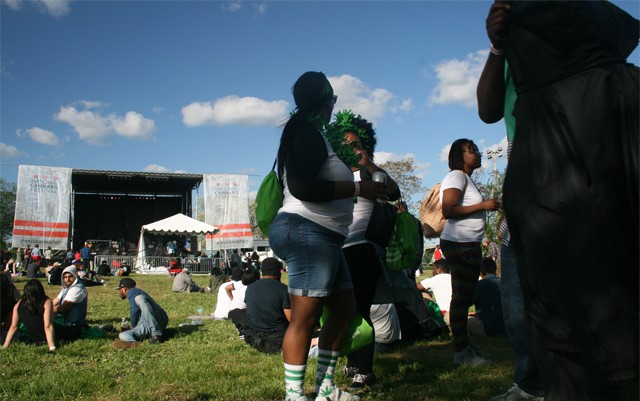 For the first time, cannabis users in the DC, Maryland, and Virginia area stepped out of the shadows and into what turned out to be a gorgeously warm and sunny day of cannabis celebrations at the National Cannabis Festival (NCF). Close to five-thousand people made it to Saturday’s inaugural event to celebrate the progress on marijuana legalization in DC and across the nation.

“It was exciting to see the diversity of east coast cannabis community and it was even more exciting to see people coming together around the shared interest in ending federal cannabis prohibition,” said the organizer and co-founder of the NCF, Caroline Phillips.

The fairgrounds were tucked behind RFK Stadium where DC’s soccer team, DC United, play in Northeast DC. The location brought with it a lot of diversity as it bridged communities on both sides of the Anacostia River. The location straddles the gentrified high-rise hipster area known as NoMa (North of Massachusetts Avenue) and older city neighborhoods like Capitol Heights and the Southeast sections of the city. It proved to be a great location that was successful in bringing together a friendly and diverse cross-section of marijuana and hemp users, supporters, and businesses.

Officially, festival organizers banned sale or consumption of cannabis, but there were plenty consuming and distributing cannabis within what some people say are the gray areas of the law. Current cannabis law in DC is outlined by Initiative 71, which basically legalizes marijuana use within one’s private residence and allows for any adult to possess up to two ounces.

“The cops and security looked the other way. As long as you just burned and chilled, they didn’t meet with you. Just don’t sell, don’t flash the cash, and you’ll be okay,” advised one person at the festival.

Just like how people aren’t arrested for smoking cannabis at the 4/20 celebration in Denver, Colorado – the NCF permit was for the celebration of cannabis. In both cities, typical guidelines for police are to only arrest those smoking outside the perimeter of a group or crowd.

EXCEPTION: Watch out in DC — it’s still federally illegal to consume cannabis and there are lots of federal parks scattered around the city.

One popular edibles company, Pink Fox, was a popular destination for festival goers. The DC-based company, specializing in baked goods and snacks infused with Tetrahydrocannabinol (THC), were sold out within a few short hours. According to experienced users, ingesting the THC through food such as baked goods, instead of smoking it, gives the user more of a ‘body high’.  Pink Fox sold bags with their logo, limited edition NCF posters and were giving away edibles. According to the Pink Fox website, they are “happy to share edibles in the metro Washington DC area – in compliance with Initiative 71.”

For a couple hundred dollars, there was even an accredited doctor offering on-site appointments for medical marijuana cards. It’s still mostly uncharted territory on the east coast; DC currently has medical marijuana, but Marylanders are getting ready for their state medical marijuana program to go online any month now.

Rounding out the festival crowd was a hula hooper with a pot-leaf ‘weed’ t-shirt and the Delaware NORML chapters’ cannabis-shaped leaf mascot who made for some great photo-ops.

In addition to vendors, there was an education pavilion and advocacy tent for people to enjoy. All the major players in the east coast pro-cannabis space were there; DC NORML, Takoma Wellness Center dispensary, Women Grow, and DCMJ – the group leading the charge in asking President Obama to completely deschedule cannabis.

Along with descheduling or rescheudling, the local call to action was clear – to vote anti-cannabis Maryland Representative Andy Harris out of office.

On a more national note, the Unity Cypher made it’s way through the festival on stage on Saturday. The three-foot fake joint is making it’s way from Maine to Florida to show a united front in the fight to legalize cannabis.

RELATED STORY: East Coast to Celebrate Marijuana by Passing a Joint through 13 States

When it comes to growing cannabis, an obvious trend on the east coast right now is hydroponic gardening. With a handful of shops having recently opened in the Adams Morgan area alone, many entrepreneurs are trying to position themselves as the go-to garden supply store for locals who grow their own at home. By the way, a DC resident is allowed to grow up to six plants, three of which can be budding.

Headlining the concert stage was De La Soul.  Jesse Royal and the Backyard Band were crowd favorites as well. Overall, festival-goers agreed it will get bigger and better with each coming year.

As a cannabis journalist, it’s refreshing to see reports from The Washington Post and other media outlets’ reports reflecting the air of normalcy and kinship at the festival – not just focusing on the controversial players in the cannabis space.

This year’s National Cannabis Festival felt intimate yet not overcrowded, and clean. I can only imagine what it will look like next year when Maryland’s medical marijuana program is up and running and a handful of other states could possibly legalize (medical/recreational) marijuana.

In what could be a sign of the crowd next year, I met four loud and drunk college boys on my metro ride home. They were coming home from a National’s baseball game when they figured out from my pot-embellished gift bag that I went somewhere interesting. Upset they didn’t know about the cannabis festival, they said they would be going next year.

Larger crowds can also be a sign of success so I’m curious to see how it evolves next year as more people learn about this movement. The event organizer, Caroline Phillips says it’s going to continue to revolve around policy issues.

“We certainly see the potential for the event to welcome a larger audience, but that isn’t our sole focus, Phillips told The Marijuana Times in an exclusive statement.

“We will be meeting with our community supporters and our advocacy partners in the coming months to talk about how we want to shape the 2017 event. One focus will be expanding the festival program to include more interactive elements to further cultivate an environment for learning, exchanging ideas and growing our east coast cannabis community,” Phillips said.