There is a marijuana revolution going on in America, twenty-three states (and the District of Columbia) have legalized the highly controversial plant for either medical or recreational use and Pennsylvania’s new medical marijuana program will make that number go up to twenty-four this weekend.

The Brookings Institution held a debate on marijuana in Washington, D.C. Thursday evening. It was an exciting sight for anyone familiar with the cannabis industry as intellectuals, lawmakers and advocates sat together to hear the case for and against rescheduling marijuana under the Controlled Substances Act.

.@repblumenauer says if we scheduled all substances all over again, tobacco would be schedule 1 #BrookingsDebate pic.twitter.com/OEa62XqVVd

The players: It was Representative Earl Blumenaur (D-OR) and Senior Brookings fellow John Hudak arguing in favor of taking marijuana off its schedule I status versus Harvard Medical School Professor of Psychobiology, Dr. Beth Madras and Special Advisor for the Drug Free America Foundation, David Evans.

It was a lengthy intro by the moderator, Sarah Trumble, Senior Policy Counsel at Third Way, but necessary to set a baseline of background facts about federal laws and medical marijuana in the United States.

Hailing from the first state to decriminalize, Oregon Democrat Earl Blumenhaur started things off with a brief history on the pot propaganda of the 1930’s and 1970’s. Things soon got personal for the Congressman, as he blamed ‘harsher’ substances like tobacco for killing his father.

“If we did the scheduling over again, I think tobacco would be schedule I,” he insisted. “There is harm,” he admitted, “but that’s not as harmful as the opioids.”

It was a theme that was carried throughout the debate. At one point, David Evans shared that both his parents died from tobacco-related illnesses but quickly shifted to attack mode, calling for the entire panel to cease from using emotional reasoning in the debate.

Evans isn’t a newbie to the anti-marijuana circuit, so he knew that in order for the audience not to immediately turn on him he needed to explain how he wasn’t a cold-hearted drug czar. It worked for a few minutes, until everyone started looking at each other in a cringe-worthy moment when Evans burned Bookings, a non-profit independent research group, by congratulating them on their 500-thousand dollar donation by a pro- marijuana group.

The debate had it all, shocking, funny and heated moments. The most uncomfortable moment of the evening, however, was the digression into racial profiling which began with Dr. Madras. “The poor and unemployed have higher addiction rates like African Americans,” said the doctor. The panel immediately jumped into an argument until the moderator stepped in. “We are five white people up here,” and therefore we should not dive into this line of discussion.

.@saraetrumble INTERRUPTS #marijuana #BrookingsDebate when it comes to race because "we have 5 white people up here" pic.twitter.com/DuJQizGRSL

The most shocking moment came from Evans when he called out the marijuana industry for being as harmful and selfish as big tobacco. “Marijuana industry is like Big Tobacco, pursuing profits over people and pushing medical marijuana…Don’t be fooled,” says Evans.

John Hudak works for Brookings and is coming out with a book on the history of marijuana this summer. On the Schedule I classification he said, “that’s government coming between doctors and patients.” Marijuana should have a carrot and a stick approach in order to get better medicine. He was referring to the idiom representing a policy that would offer a combination of rewards and punishment to induce behavior.

Dr. Bertha Madras has an impressive background in neurology and has worked with the World Health Organization (WHO). She joined Evans in the fight against marijuana saying, “just because a plant is old and was used as medicine in ancient times doesn’t mean it’s a currently effective medicine.” Her argument was focused on smoked marijuana, addiction, and profiling minorities as more likely to become negatively affected by legalization.

She said her conclusions come from reading hundreds of medical journals and studies over her lifetime. She explained that the clinical trials on marijuana are difficult to assess because they were either conducted for too short a time period, or there were too few volunteers to analyze.

So why not reschedule, to allow for more accurate studies?

The answer from Dr. Madras and Evans is they believe the medicine currently available gets the job done. It’s not a war on drugs but a defense of our brains, our ultimate source of our humanity. “We do not have evidence that it’s effective, safe or conditions it would be used,” Madras continued, “to schedule it for bureaucratic reasons make no sense.

I spoke to some of the audience members that evening after the event.

“A lot of this is ego”, said Howard Wooldridge, the retired police detective and co-founder of Law Enforcement Against Prohibition (LEAP). Wooldridge was not impressed with the anti-pot panel. “I’ve seen better arguments from Kevin Sabet of Smart Approaches to Marijuana (SAM),” he said.

Christine Edmond, Community Organizer for March Against Prohibition, also wished for stronger arguments against marijuana. “I know where I stand, but I want to see if someone has a good reason for what they believe in,” she commented.

After the debate, Rep. Blumenaur told me that he thought the debate went well and that everyone, including the mainstream media are ‘very receptive’ to the issues at hand. The Congressman also predicted that no matter the next president, no one will be elected who will undo the state laws.

Hillary Clinton, in particular, he said is ‘very likely’ to keep the rules of this administration or go even further.

“The train has left the station when it comes to marijuana,” said Rep. Blumenaur. 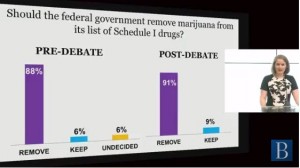 The audience was polled before and again after the debate. An overwhelming majority, 88 percent before and 91 percent after, agreed that marijuana should be taken off the schedule I classification. Interestingly enough, the 6 percent of people who were undecided at the beginning of the debate split right down the middle at the end of the evening.