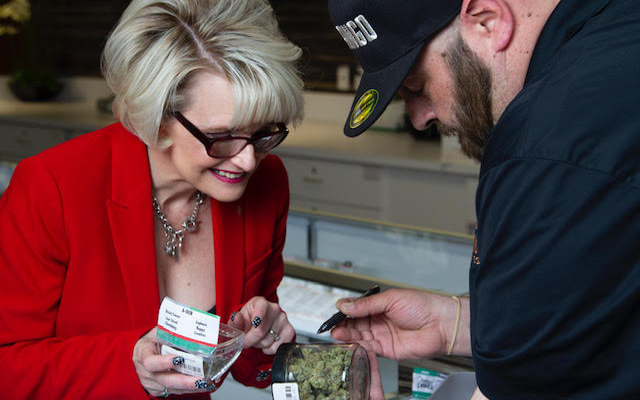 Cannabis delivery services have profoundly changed the way people get marijuana by making it more accessible and consumer-friendly. For medical patients, cannabis can help with issues from arthritic inflammation to brain-trauma induced seizures, along with reducing pain and anxiety. Older patients now find that cannabis delivery can be much more convenient and discreet than they might assume.

You don’t have to live in pain

Most everyone deals with some form of suffering, but for a growing group of people, medical cannabis can be the answer to relieve that pain. This new group includes people who are realizing that marijuana isn’t just for recreation, but also has medical benefits.

Nikki Lawley is a retired pediatric nurse in Buffalo, NY. One day one of her young patients pushed back on her so hard after getting a shot that it knocked Lawley back, and she hit her head with enough force to cause a traumatic brain injury. According to Lawley, her joyful, energetic persona was now plagued by intense headaches, issues with fine motor control, sensitivity to light, and cognitive challenges that caused her tremendous emotional and physical pain – and forced her to retire.

None of her doctor’s traditional treatments worked, and some medications made her symptoms worse, resulting in her falling into a deep depression. Then, in January of 2017 she saw a billboard for medical cannabis in Las Vegas. Lawley says cannabis pulled her “off the ledge” – her quality of life improved dramatically and she was able to function more normally.

New York’s medical cannabis rules were so restrictive at the time that it was easier for Lawley to drive to Canada to get the medicine she needed. Since then, she’s found a new mission sharing her experiences and telling her story on her site NIKKI and the plant.

Today 37 states allow medical cannabis, and 18 states also allow recreational sales (including New York), with Rhode Island, Delaware and Oklahoma about to legalize sales. Just imagine how much time, money and most importantly, pain Lawley could have avoided if she could have simply accessed an app on her phone instead of driving to another country?

Another newer cannabis user is former librarian and grandmother of five, Susan Allen. Allen has chronic arthritis, and the pain was so intense that she had to use opioid painkillers for nearly 20 years. The opioids made her groggy and unable to concentrate on basic tasks at times. When she tried cannabis, she found her pain disappeared, with none of the negative side effects of opioids. She also discovered that she could use cannabis oil mixed into a mug of tea for relief. Once cannabis was an option for Allen, she switched from opioids and never looked back. The increased availability of legal cannabis, therefore, could end up being a major boon for public health. According to the CDC, in the United States in 2020 there were 142,816,781 prescriptions filled for opiods, and an estimated 75,673 overdose deaths from opioids in a 12-month period ending in April 2021. Death by cannabis overdose, by contrast, is vanishingly rare, if not medically impossible.

An unexpected but welcome side-effect from Allen’s cannabis use is that she has a new way to bond with her family across generations. Her grandson Will uses cannabis to combat anxiety and depression. The two of them can be spotted trading stories on the front porch of their family home in Virginia, Allen sipping on her infused tea while Will puffs on a joint. How times have changed! Today, the taboo around medical marijuana is floating away like a puff of smoke.

Leave your dealer in the past

But for older users who may have last used marijuana rolled on a Pink Floyd album, there’s a lot of education needed to bring these people into the fold – today’s market can be a bit intimidating. Between edibles, topicals, vapes and traditional flower, plus hundreds to thousands of new strains, today’s cannabis options can be overwhelming. It’s hard to find the right product, and the physical act of going into a dispensary is challenging for someone suffering an arthritis flare up. That’s where delivery comes in.

Onfleet recently conducted a survey in which more than half of Americans polled would be much more willing to purchase legal cannabis products via delivery vs. going into a store/dispensary. Multi-state services like Curaleaf can make purchases discreet and convenient – it’s as easy as ordering a pizza. If a person isn’t comfortable deciding what to order online, most dispensaries also offer phone service so the customer can ask questions. The ease and discretion of delivery means people have access to a wider variety of products than ever before, and people can take as much time as they need to find the right product for them. Another interesting find was that around half of younger demographics polled would rather spend time at the DMV than run into someone they know while buying legal cannabis products. Discreet cannabis delivery eliminates these concerns, so buyers don’t have to worry about running into someone they know at the dispensary.

In 2022 consumers have more options than ever before to get their medicine. Delivery means consumers don’t have to travel internationally or illegally to get their cannabis – their cannabis can travel to them. And the future looks promising with three more states on the cusp of legalization. That means more delivery services popping up nationwide, and more people like Nikki Lawley, Susan Allen, and her grandson, Will, with better access to the medical benefits of cannabis.