A new report from UK-based industry advisors, Prohibition Partners, suggests that Europe will become the largest legal cannabis market in the world once all countries have introduced legislation and regulation over the next ten years. Cannabis is set to boom and will drive economic and employment growth and will have a significant impact on a wide range of social and health issues.

It’s a bold assumption that the European legal landscape to cannabis will change so substantially within the next 10 years. However, things are changing across Europe as they did in the U.S. and Canada in recent years.

In my whistle stop tour of Europe these last few months I saw big business priming itself for the European cannabis market in London, high tech cannabis-related devices on display at the world’s largest cannabis show in Barcelona, Germans living as if cannabis were not illegal in Berlin and cannabis activists accepting things have evolved in Amsterdam.

Given that there are no sane arguments as to why cannabis should be kept illegal for medicinal or recreational use – and the European Union seems to have a hands off approach, allowing member states to sort it out locally – the dream of a fully legal cannabis market in Europe is seeming more inevitable.

The report, which is the 3rd Edition of the “European Cannabis Report”, explores Europe’s complex regulatory environment with detailed analysis of the 28 countries making up the key markets across the medical, recreational and industrial sectors.

Regarding cannabis legislation for medicinal use in the EU, 2018 has not been a bad year, as over six member states have announced medical legalisation and patient numbers have grown by 40% month on month.

Some form of medical cannabis (or cannabis-based medicine) is now legal in 22 countries in the region. Whether cannabis-based medicine is easily accessible to those who need it is debatable, but there are clear signs progress is being made as seen with the recent case of Billy Caldwell in the UK, which seemed an echo of a similar case in Ireland (Ava Twomey), with other parents fighting for the right for their children to access medical cannabis across Europe.

As an example, the UK’s mainstream press seems to have now shifted its stance towards cannabis and public opinion is evolving. The UK  – like many European governments – struggles to balance demand, public interest and commercial interests. 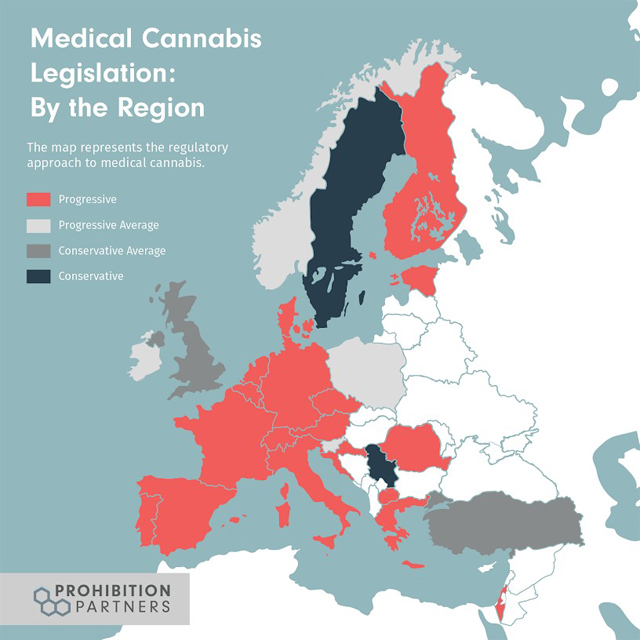 And The Recreational Market?

It’s expected that by 2028, the vast majority of European states will pass legislation legalising medical cannabis programmes and recreational cannabis markets. How these markets will operate remain to be seen. It’s clear that the medical cannabis market will slot into the already established health systems being prescribed by doctors and supplied via traditional pharmacies. As for the European recreational market, it is likely to follow in the footsteps of the Canadian model. 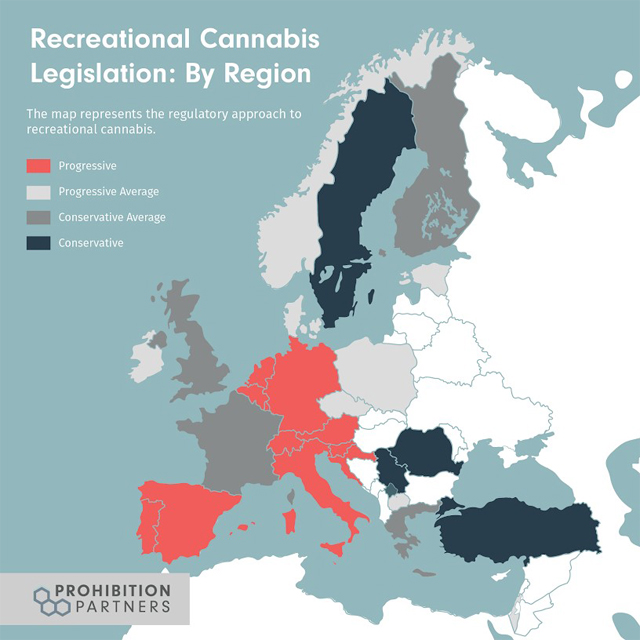 While pockets of Europe are famous for their tolerance of recreational cannabis, there has been no significant regulatory proposals for the legalisation of cannabis for recreational use. Seemingly, recreational use is much further down the agenda.

However, the interest and momentum towards recreational legalization is growing as European political and business leaders lend their voices and resources towards the movement. The commercial returns seen in regulated markets across the Atlantic have been noticed by a large number of European states who have suffered economically in recent years and are in dramatic need of a boost.

The value of cultivation, manufacturing and distribution is well-reported, but we are only beginning to discover the ancillary services of the cannabis industry, such as branding, data and analytics and “canna-tourism”. Europe is still at very early stage of market development but offers one of the world’s biggest commercial opportunities.

The World’s Largest Cannabis Market May Be Tricky To Crack

A transition from an illicit €30 billion ($35B) market to a taxable €60 billion ($70.4B) recreational industry makes a lot of sense to politicians and policymakers alike. Combining medicinal and recreational, you have the largest cannabis market in the world, valued at €115.7 billion ($135B).

“Public, political and professional opinions are swinging largely in favour of the legalisation and regulation of cannabis,” says Stephen Murphy, Managing Director of Prohibition Partners.

“Europe, which is known for its considered and conservative approach to change, is suddenly becoming a hotbed of activity for the global cannabis industry. In just six months, the European cannabis industry has grown more than it has done in the past six years. Currently, patient numbers are below 100,000 across the region but this number is set to grow to over 30 million in the next ten years. As medical cannabis has the ability to treat well over 52 conditions, this is quickly becoming the most important healthcare development of the past 20 years. Europe is gearing up to experience a ‘Green Rush’ of economic growth, with cannabis set to become the dot-com boom of the early 21st Century.”

Europe has a market of over 742 million people (more than double US and Canada combined) and over €150m has already been invested in the European cannabis industry. However, it’s not all smooth sailing for international cannabis companies, and Europe will be one of the most difficult markets to enter due to its strict regulatory framework.

Local operatives and consultancies will be popping up to aid established cannabis companies  negotiate the complex licensing and trading requirements, not to mention the cultural and societal nuances around cannabis consumption – something I discover frequently on my travels around the European cannabis scene.

The economic impact of this potential cannabis market is difficult to ignore. Looking across the Atlantic, Canada has seen incredible social, economic and health benefits of a regulated cannabis market. Legal cannabis markets have experienced 40% year-on-year growth, becoming the fastest growing market for entrepreneurs, investors and job seekers. With the Canadian market expected to outsell wine by 2020 ($7 billion CAD), legal cannabis will disrupt the huge pharmaceutical, healthcare, alcohol and wellness categories in Europe.

As the report says in the executive summary: “Cannabis is finally emerging from the darkness and governments can now estimate the significant social, health and economic benefits that come from cannabis legalisation.”