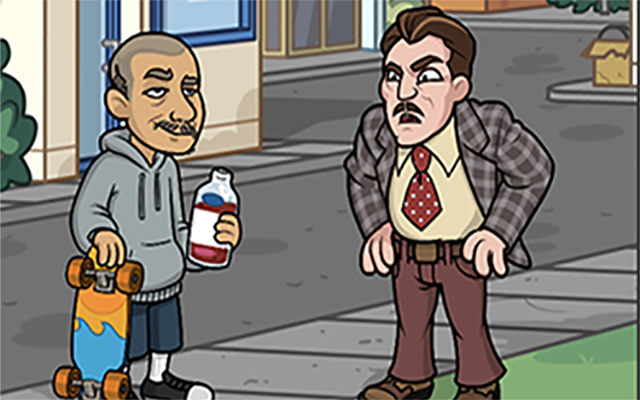 Tik Tok influencer Nathan Apodaca (Doggface208 on TikTok) went viral last month with a video that mellowed out the world – longboarding through the highway while lip syncing to Fleetwood Mac’s iconic song ‘dreams’, reaching over 35 million views. Nathan’s chill vibes made an impression and caught the attention of celebrities worldwide including, Shakira, Joe Rogan and Jimmy Fallon, as well as Mick Fleetwood himself.

Last Friday, October 16, Nathan appeared as a guest character in the mobile game “Cheech and Chong Budfarm” – the next venture in his continued rise to fame. Fans of Doggface got to see him in an in-game event titled “Battle of the Bands” where he showed up on the sidewalk with his skateboard, drinking cranberry juice and getting the run around by Stadanko alongside his buddies Cheech & Chong.

In an effort to continue spreading positivity around the collaboration, LEAF Mobile, the publishing company behind Cheech and Chong Budfarm, donated $10,000 to charities of Nathan’s choice, Idaho Humane Society in the US and B.C Humane Society in Canada.

Speaking about the collaboration, Darcy Taylor, CEO of LEAF Mobile said, “Nathan Apodaca has taken the world by storm with his skateboarding, lip-syncing video to the classic ‘Dreams’ by Fleetwood Mac. His positive vibes have inspired countless remakes of the TikTok, including by Mick Fleetwood himself, making Apodaca a cultural phenomenon.

“When our partners, the renowned comedy duo Cheech & Chong, noticed that Nathan celebrated 1 million followers with a rendition on TikTok of ‘Earache my eye’ from their cult movie, they reached out to him. Apodaca’s response, “YoOoOoOooO! So legendary” made it clear we needed to get him and his vibe involved in the game.”

Tommy Chong also provided a seal of approval on the collaboration, adding “Cheech and I love the simple, chill feeling in Nathan’s TikTok video, it’s really what we need right now and we were excited to have him in our game.”

Speaking about his involvement in the game, Nathan Apodaka said, “It’s really an honor to be working with Cheech and Chong in their game. These guys are legends and I have been a fan for a really long time. I’m so glad LEAF was able to make this happen and can’t wait to play the event.”

To see Doggface’s recent videos, take a look at Earache My Eye, Fleetwood Mac skateboard and the Cheech and Chong collaboration announcement on TikTok.