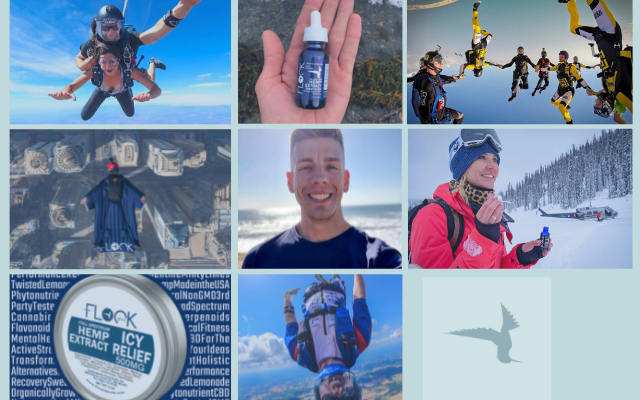 Guinness World Record holder and former professional skydiver Matthew Gagne has always been motivated by his desire to live boldly, an ethos that infuses his fast-growing CBD company, Flock Goods. But he never would have discovered CBD if it weren’t for a brush with death.

His greatest adventure began when he left his hometown, Leominster, Mass., and traveled to Dubai to pursue his skydiving dreams. But four days before his training with a world-class skydiving team was set to begin, his life took a sudden turn.

Gagne was in the passenger seat of a car when it veered off a remote road in the deserts near Abu Dhabi, striking a sand dune.

The impact caused the car to flip into the air and barrel across the sand. When the vehicle came to a stop on its roof, Gagne was trapped inside, buried in sand upside-down.

“I could hear the driver crawl out. He ran around the vehicle, screaming and crying,” Gagne said. “The first responders had to make a decision: move a potential spinal cord injury or leave me to suffocate and die right there in the sand.”

Once help arrived, Gagne was rushed to a hospital for emergency surgery. When he woke, he found himself restrained and disoriented, with medical devices protruding from all over his body.

He had suffered numerous fractures along his cervical and thoracic spine, and part of his cervical spine had been completely severed, leaving him internally decapitated.

Doctors said he would never skydive or live an active lifestyle again.

For the next 14 weeks, Gagne viewed the world from between the bars of a medical halo.

His bones would eventually mend, but his body would never be quite the same. A sleek titanium cage was inserted into his spine to strengthen and support his damaged vertebrae. Long-term effects of the accident included constant pain from bulging discs and irreparable nerves.

Despite his prognosis, Gagne was determined to keep living his life to the fullest. He began searching for alternative ways to reclaim his body. Soon, he embarked on a deep dive into the healing potential of nutraceuticals.

Treating his pain with high-quality nutrients, hemp, and CBD products, he noticed a significant reduction in pain. He also noticed a profound shift in other areas of his life as he grew stronger, healthier, and more enlivened.

After years of trial and research, Gagne developed a holistic, custom-made nutritional supplement routine. But he grew tired of navigating through supplement aisles for each individual product.

That was when he envisioned a single supplement that could meet all his nutritional needs. When he was unable to find what he was looking for, the idea for Flock Goods began to take shape.

A year and a half after his accident, Gagne was able to return to skydiving. His body would never function the same again, and he could no longer sustain his career as a skydiver. But he now had a new passion – sharing nutraceuticals with the world.

“Everybody dies, but not everyone lives,” Gagne said. “The purpose of Flock Goods is to inspire people to lead positive, active, and healthy lifestyles. Our nutraceuticals nourish the building blocks of our bodies so that people can discover the healthiest and most complete version of themselves.”

The company takes pride in offering pure, consciously cultivated products to help people maximize their potential, recover better, and live boldly. A portion of every sale is donated to spinal cord injury patients.

Members of Gagne’s Flock “motivate each another by sharing stories of overcoming adversity,” Gagne said. “Together, we chase our dreams and face our fears. Together, we can meet any challenge. We are strong as a flock.”

Gagne believes everyone has the power to influence the quality of their own lives, as well as the lives of those around them. This mental framework has helped him build a successful company in the aftermath of tragedy.