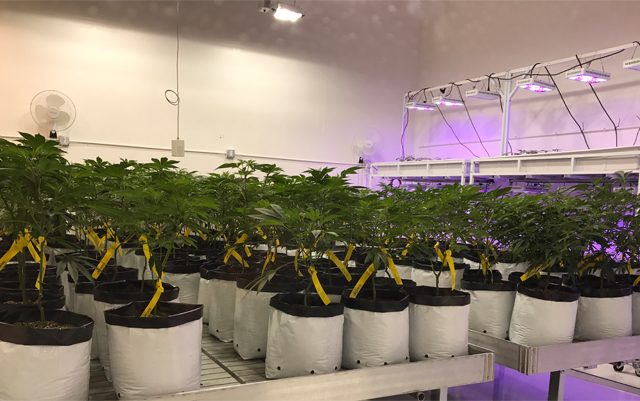 When Colorado became the first state to legalize recreational marijuana, many cultivators felt they could operate with a “do-it-yourself” attitude. Many issues have popped up since 2014 that have disabused cultivators of this notion. One issue that keeps recurring within the industry on a national scale is pest control.  Agriculture departments in states like Colorado, Washington and Oregon continue to release updated lists of approved pesticides, which allow cultivators the ability to treat their own crops with products that are approved within each state.  Med-X, Inc., Med-X, Inc., Med-X, Inc.

The pesticides on these state-approved lists are, for the most part, what are known in the professional pest control world as “minimum risk pesticides,” which has given cannabis cultivators a relatively false sense of security. The phrase “minimum risk” causes many cultivators to think it will be a breeze to take care of pest control themselves since most ingredients are essential oil blends. The public perception of a pest control professional is somewhat misguided, since many don’t realize that because of numerous federal restrictions, pest control is no longer a simple proposition.  Med-X, Inc., Med-X, Inc.

As time goes on, more and more of the public is turning to green pest control; products that are very similar to the type of products that have recently become the go-to for cannabis cultivation pest control. For example, one product line developed in California that is being used nationally in commercial and residential pest control is Nature-Cide. Nature-Cide products were initially developed as a product to repel rattlesnakes and became a green product go-to for the pest control industry in late 2014. Companies in Michigan and Illinois began using the product line for things like spiders on boat docks and fleas and ticks in turf areas and in Pennsylvania, New York and New Jersey for pests like cockroaches and bedbugs. The brand quickly made a name for itself nationally and became available through its distribution partner “Target Specialty Products,” which now offers the product line in more than 30 distribution centers around the country. Med-X

Recently we caught up with Nick and Angela Madero of Madero Pest Control in Pueblo, Colorado. Nick has worked in the pest control industry since 2008, and in late 2014, decided to venture out on his own when Nick and Angela started their company in early 2015. Madero Pest Control services a variety of commercial accounts such as a school, multiple restaurants and a wide variety of residential clients throughout the city of Pueblo.

By mid-2015, Madero Pest Control began to see a demand coming from cannabis cultivators and medical marijuana dispensaries in the immediate area. While discussing the needs with the cultivator and dispensary owner/operator, it was realized that in both of these scenarios, it was imperative for operators to be compliant with county and state agriculture inspectors. “Many do not realize that as a pest control company, in order to be 100% compliant, one must keep detailed records of any and all applications – and be ready to fully divulge any and all applications – within the county at any given moment, if inspectors ask,” Nick Madero told The Marijuana Times. “On one occasion, we have had to go to a cultivation site that we service with Nature-Cide products, and go over all the details and records with the agricultural inspector. This gave the cultivator owner/operator a much higher level of confidence when going through the inspection; needless to say, they passed the inspection.” Med-X, Inc., Med-X, Inc., Med-X, Inc., Med-X, Inc.

Colorado cultivators are beginning to realize that having professional contractors in all aspects of their operation is great for their peace of mind and easier than risking an operational shutdown or a large fine. In some places, like Denver, new regulations are set to take effect. In fact, in August of this year a new Urgent Denver Compliance Advisory was released for marijuana facilities operating under temporary approvals or facilities that are not in full compliance with the requirements of the Denver Fire Code; they must become compliant or cease operations by October 1, 2017. Med-X, Inc.

“Clearly, hiring a company that is experienced in all types of pest control, with a track record of reporting and following the rules and regulations, brings a much higher level of confidence of compliancy and is driving our business to be recognized and referred to as a reliable and friendly pest control company for cannabis cultivation here in Pueblo,” Angela Madero told us. Med-X, Inc., Med-X, Inc., Med-X, Inc.