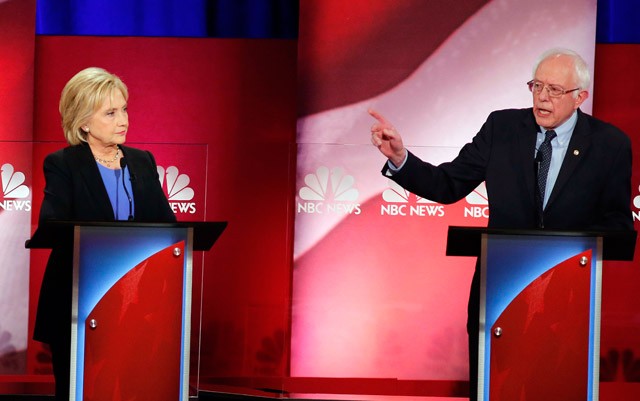 On Sunday evening, the three remaining Democrats lined up on the debate stage for the first Democratic debate of 2016. The topics focused largely on healthcare and economic reforms with a sprinkling of foreign policy, The War on Drugs, and foreign policy. The word ‘marijuana’ was mentioned three times that evening, each time being used as an example of what went wrong with The War on Drugs. Specifically, how it increased incarceration rates and how The War on Drugs created a socioeconomic gap between the rich and everyone else.

The contenders in line for the nomination are former governor of Maryland Mike O’Malley, the Independent Vermont Senator Bernie Sanders, and former New York State Senator and former Secretary of State, Hillary Clinton.

O’Malley took the millennial approach to his opening statement with his remark, “I was born the year Dr. King gave his I Have a Dream Speech.” He also touched upon the significance of the location of where they were standing – a block from this summer’s mass shooting that took the lives of nine people at the Emanuel African Methodist Episcopal Church in downtown Charleston, South Carolina. He thanked the people of South Carolina, “You taught us, in fact, in keeping with Dr. King’s teaching, that love would have the final word when you took down the Confederate flag from your state house; let go of the past and move forward,” he said.

Sanders opened with a call for campaign finance reform, an issue he has passionately talked about since he first announced his run for the presidency.

The moderators took it from there and kicked off the NBC debate with a question to the candidates about their priorities.

Sanders list of priorities included: having healthcare for all, “bringing America together” to end the decline of the middle class, and tax reforms that would make the highest income tax bracket “pay their fair of taxes.”

Clinton’s priorities were stacked a bit differently, she said she would demand legislation for equal pay for equal work between men and women as her number one deliverable. She then went on about healthcare reforms that build upon the Affordable Care Act, also known as Obamacare, with avenues for health insurance companies and pharmaceutical business to stay “on a more stable path”.

O’Malley promised he will work to raise all wages to 15 dollars an hour and briefly laid out his plan for a more sustainable future where America uses green energy.

‘Marijuana’ was mentioned three times, twice by Sanders and once by O’Malley. Sanders hit the issues hard, condemning both Wall Street and The War on Drugs.

“I find it very strange that a major financial institution that pays $5 billion in fines for breaking the law, not one of their executives is prosecuted, while kids who smoke marijuana get a jail sentence.”

Sanders called the whole political financing system “corrupt” and called out Clinton for taking close to a million dollars in speaking fees from them in one year.

Governor O’Malley was also the mayor of Baltimore. He has repeatedly brought up his policing reforms on the campaign trail, however, not everyone agrees that his reforms brought positive change. Here is what he said in response to the question, “do black lives matter?”

“And that’s why I ran, because, yes, black lives matter. And we did a number of things. We weren’t able to make our city immune from setbacks as the Freddie Gray unrest and tragic death showed.

We were able to save a lot of lives doing things that actually worked to improve police and community relations. The truth of the matter is, we created a civilian review board. And many of these things are in the new agenda for criminal justice reform that I’ve put forward.

We created a civilian review board, gave them their own detectives. We required the reporting of discourtesy, use of excessive force, lethal force. I repealed the possession of marijuana as a crime in our state.”

If you look at his record in Maryland, this could be one of the biggest understatements of the night. This Washington Post article explains the disconnect between the way people in Baltimore saw his “zero-tolerance” policy and how O’Malley sees it.

“O’Malley also touts a police crackdown during his time as mayor that led to a stark reduction in drug violence and homicides as one of his major achievements,” the article continues, “yet some civic leaders and community activists in Baltimore portray O’Malley’s policing policies in troubling terms. The say the “zero-tolerance” approach mistreated young black men even as it helped dramatically reduce crime, fueling a deep mistrust of law enforcement…”

This alleged mistrust, some say, led to the outrage and violence seen in Baltimore following the death of Freddie Gray this summer.

Clinton chimed in on the topic, saying of the Charleston shooting “the systemic racism in our criminal justice system…is heartbreaking.” Her solution is to re-training police officers. “We have a serious problem we can no longer ignore,” stated Clinton.

Speaking of broken systems, Sanders used one of his two marijuana mentions as an example of America’s broken prison system.

What Sanders says about having more people in jail is, for the most part, backed up by data.

So, has The War on Drugs really failed?

Clinton pointed to opioids and heroin as the drug problem now and her new approach is aimed at policing. “Police officers must be equipped with the antidote to a heroin overdose or an opioid overdose, known as Narcan. They should be able to administer it. So should firefighters and others, Clinton adds, “we have to move away from treating the use of drugs as a crime and instead, move it to where it belongs, as a health issue. And we need to divert more people from the criminal justice system into drug courts, into treatment, and recovery.”

Sanders agrees with Clinton asking for a mental health care revolution but goes further, partially blaming the pharmaceutical industry and the drug companies “producing all of these drugs and not looking at the consequence of it.”

As it stands, the most recent poll places Clinton at 52 percent, Sanders 37 percent, and O’Malley at 2 percent.

The debate was really between Sanders and Clinton while O’Malley tried to get a word in edge-wise. At one point in the debate, O’Malley even asked for time to talk. O’Malley is the one to watch and see if he drops out of the race entirely.