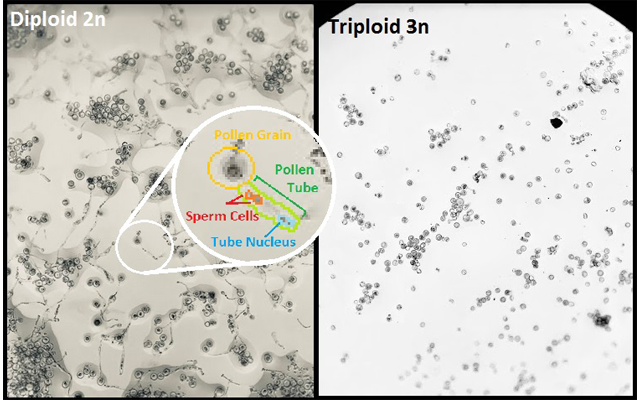 “The development of triploid seedless varieties has been a huge step forward in many commercial crops including watermelon, banana, and apples,” said Ken Owens, PhD vegetable breeder and former President of Magnum Seeds. “This trait’s introduction in cannabis is a real breakthrough that will allow higher yields, reduced costs as well as improved aromatic and chemical qualities of the crop. All this leads to higher profitability and control of your crop.”

The ability to grow THC-rich cannabis from sterile, triploid seeds and clones that are guaranteed to produce virtually seedless plants is a significant win for cultivators. Pollen-proof cannabis, and the advantages it offers, will help move cannabis production from artisanal cultivation to large-scale agriculture.

By planting PistilGuard genetically seedless clones and seeds, growers will be able to confidently scale up their capacity while simultaneously saving labor costs–without fear of losing crops to accidental pollination.

PistilGuard technology drives down the cost-per-acre of producing cannabis and increases yield. This means that cannabis can now be grown on the same scale as corn, wheat, or industrial hemp.

By enabling legal growers to now confidently grow thousands–not dozens–of acres at a time, PistilGuard genetically seedless cannabis will allow them to use scale and lower their costs to the point where they can successfully compete against underground growers.

“Now that scientists at Dark Heart have developed the core technology, they’ll be able to introduce new seedless, triploid-based strains and cultivars through traditional breeding that should bring cannabis production to a whole new level very soon,” added Owens.

Seedless cannabis is a huge deal

Effectively, accidental pollination and seeding can turn a crop worth $1,000/lb into low-value biomass. The presence of seeds in cannabis plants decreases the density of cannabinoids and terpenes, leading to low THC, loss of yield and diminished bag appeal. Breeders have long sought ways to remove seeds from cannabis.

In the 1970’s, cannabis farmers produced the first breakthrough in the campaign to produce seedless cannabis when they introduced Cannabis Sinsemilla—in Spanish “without seeds”—by physically isolating female plants from the presence of any pollen-producing males.

Further advances were made in the 1990’s with the introduction of feminized cannabis seed, capable of producing overwhelmingly female plants. However even plants grown from feminized seed were still susceptible to accidental pollination from within the greenhouse or from neighboring fields in outdoor grows. Feminized seed can also still produce phenotypically male plants, albeit in very small amounts.

Producing seedless cannabis plants effectively solves this problem. Triploid seed-based plants are practically incapable of setting seed–even when directly exposed to male pollen. Male plants in the same field, same greenhouse or neighboring field are not a problem for a triploid crop.

Dark Heart PistilGuard branded seeds and clones will be available exclusively to Dark Heart customers and partners this year through field trials, then will be generally available for sale to all California commercial growers in 2023.