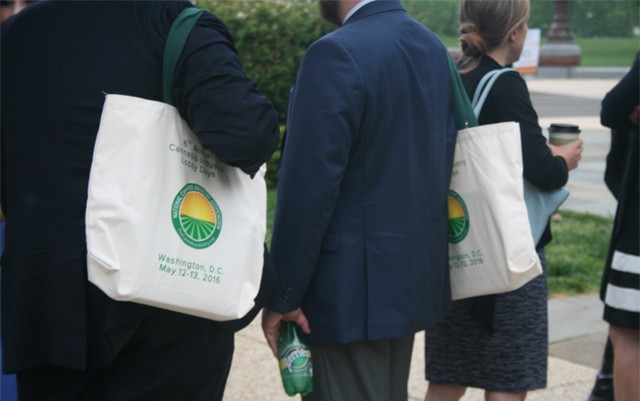 The national trade association for the cannabis industry, The National Cannabis Industry Association (NCIA), held its sixth annual lobby days this week on Capitol Hill in Washington, D.C. More than 150 members flew in from all over the country, bringing together some of the most powerful and influential cannabis business owners, cultivators, and research firms to the nation’s capitol to lobby for their number one concern.

Cannabis businesses are stuck between a rock and a hard place when it comes to finances. With cannabis still federally illegal, many banks either refuse them accounts, or, they take their account –until it’s eventually shut down or frozen. It’s happened to dozens of the ganjapreneurs who came to the Capitol lobbying for equal access to banking. Along with nowhere to put their money, they are paying more of their money than any other business in taxes. It’s an issue they are running into year after year — being unable to deduct business expenses due to Section 280E of the tax code. It’s an addition to IRS standard that has been crippling cannabis business owners. It was meant to prevent any illegal drug business from taking deductions, however, since cannabis is federally illegal, legitimate cannabis businesses can’t deduct employees salaries, among other equipment expenses, and it’s stunting more employment opportunities from this job sector. 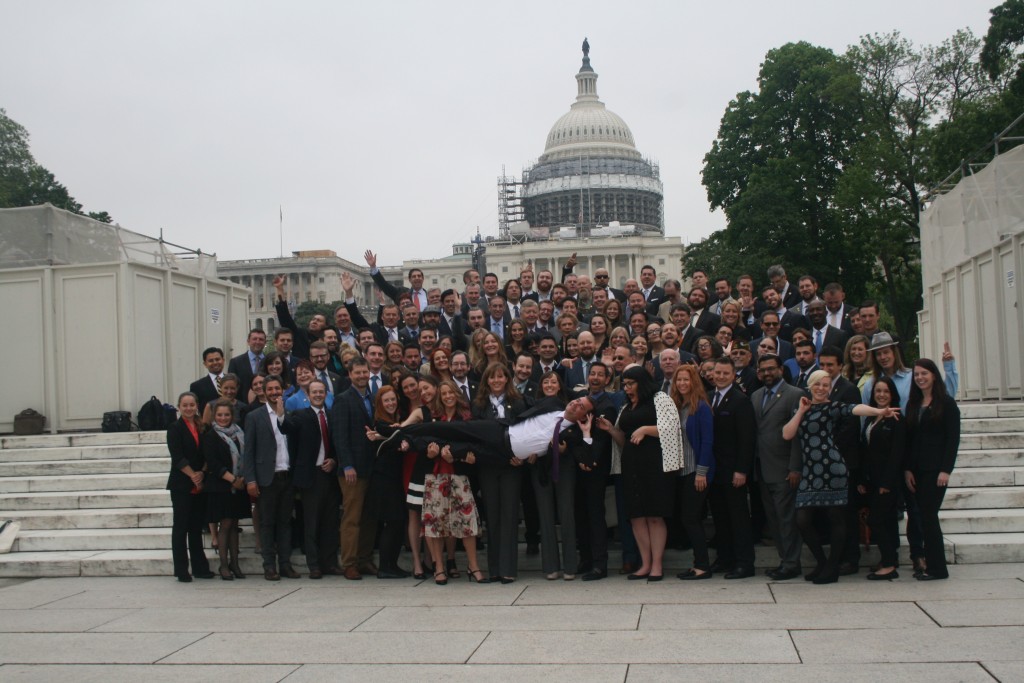 Hitting the House and Senate, teams of members spoke with mostly office staffers about the issues. Depending on the state representative’s stance, and familiarity on the state of cannabis in America,  NCIA groups were given a few minutes time with everyone from the office scheduler to the Chief of Staff – and in some cases, even the lawmaker. One NCIA group made of mostly Maryland residents ran into, and briefly got to speak with, Representative Chris Van Hollen (D-MD). Rep. Van Hollen is currently running for state senator, replacing 30-year veteran Sen. Barbara Mikulski (D-MD) as she retires from public office. He performed very well in his state’s primary and is the favored Democrat to fill the vacancy. In the process of setting up it’s medical marijuana program, Maryland will be issuing out licenses any month now. Rep. Van Hollen is on board with NCIA’s medical, CBD, and recreational amendments to legislation, but he has not yet co-sponsored the banking and tax bills. Drop by’s like these, from members of a trade organization, are chances for lawmakers and their staff to hear about important industry issues. In this case, one of Rep. Van Hollen’s staff did take a meeting with NCIA members, giving both sides a chance to talk about their concerns about the amendments NCIA lobbyists are advocating throughout their lobby days.

Just had a productive conversation with @chrisvanhollen, who happens to be my Rep. in MD, says he will looking at the #280E issue. He's overall a supporter of #medicalmarijuana #adultuse #VAuse #CBD amendments #ncialobbydays

Another smart move by the NCIA was targeting Pennsylvania Republicans. The Keystone State just passed their medical marijuana initiative, living up to their nickname by tipping the country to having a majority of medical marijuana states. These banking and taxing issues are going to come to Pennsylvania and Maryland sooner than later, and NCIA members tried their hardest, using personal stories and the facts, to keep them informed about what lies ahead for states new to legal cannabis.

.@repblumenauer opens press conference on #Cannabis #ncialobbydays "this is the year the movement crests" pic.twitter.com/FR36ySG026

District of Columbia Representative Eleanor Holmes-Norton also came to speak about the continued progress on the medical marijuana front. “If [lawmakers] are not in it, please get out of our way,” said Holmes-Norton. Another advocate, Rep. Jared Polis (D-CO) spoke about his bill H.R. 1010, which aims to regulate cannabis like alcohol. 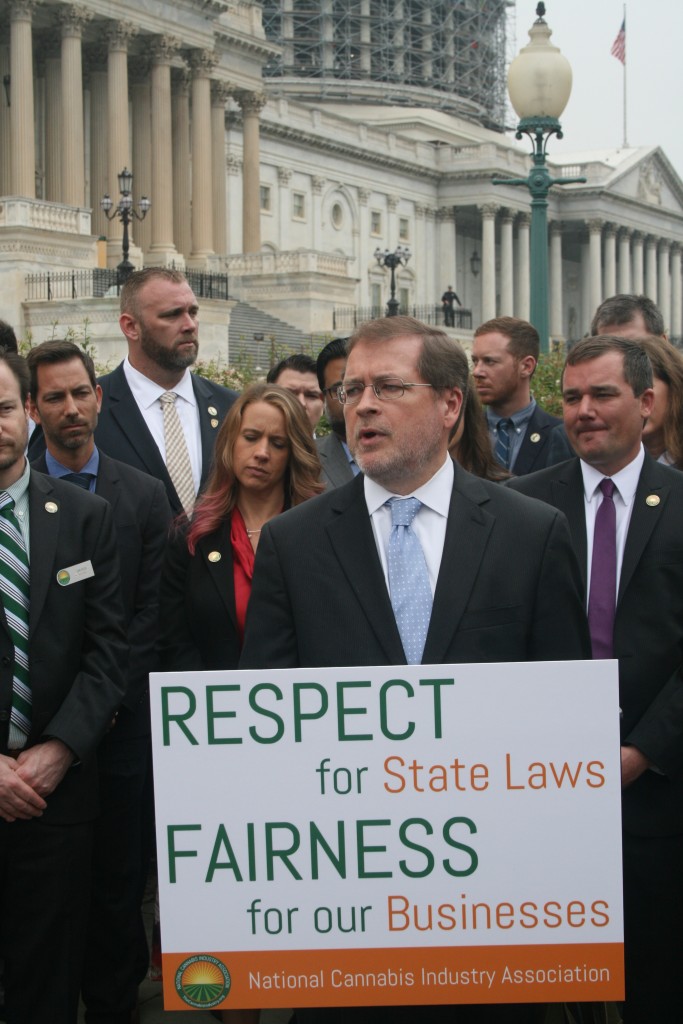 In an interesting juxtaposition, Grover Norquist, Republican sweetheart and founder of Americans for Tax Reform, then took the podium – but before that, he gave me an exclusive interview. He compared what’s going on in cannabis taxation to gambling in Las Vegas. Cannabis sellers are unfairly penalized, “you don’t see gambling in Vegas being taxed like this.” He says it’s a serious matter of tax policy, “The federal government treats it like a crime, literally…We need to allow federalism to flourish which may be in favor or not, we can’t have the federal government give tax penalties that doesn’t move when the state legislation moves  – and IRS tax law doesn’t change easily,” explained Norquist.

Aaron Justis, president and CEO of the vegan-organic friendly licensed dispensary in Los Angeles, Buds and Roses Collective, and board member of the NCIA, added his personal plea for reform.

Having more than 200 meetings on the Hill with their 150 members, the trade organization run for and by the industry say they made their strongest appearance on the Hill, to date.  Members came to educate anyone and everyone on the issues affecting their livelihood, their business. They say they just want to be treated fairly, like any other responsible business. 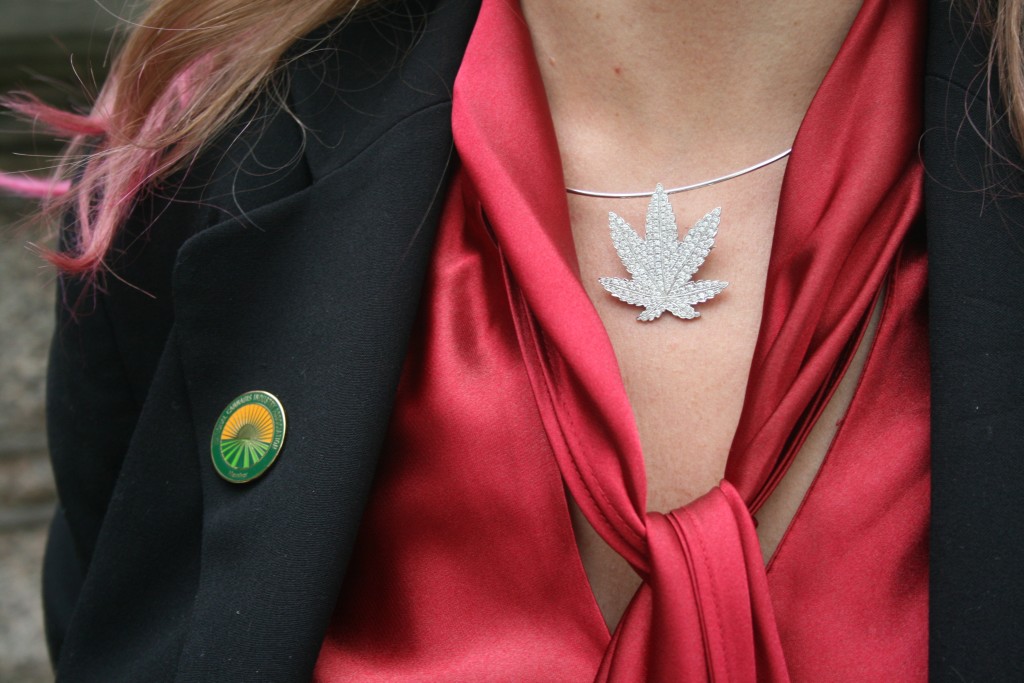 This year, NCIA staff are really pleased with the turnout. They say each year more members are flying in, and more lawmakers are taking their meetings. “We are just like any other trade organization, we want to be heard,” said Michael Correia, head of Government Relations for the NCIA. That means meeting, and PAC (political action committee) donations. Just like any other trade organization, NCIA has a PAC, which, according to the Federal Election Commission (FEC), allows annual donations of up to 5,000 dollars. The NCIA has a PAC and has been working on behalf of their members with contributions for three years now. In its infancy compared to Big Pharma, Tobacco, and most other trade associations, the interest and enthusiasm from members are growing at a steady pace.

Focusing on banking and tax reform, the NCIA and it’s members stuck to the message they wanted to drive home to lawmakers of a fair and equal financial playing field for their businesses. Although, talking about finance reforms to representatives of constituents who have access to legal cannabis markets is much like preaching to the choir, NCIA lobbyists left no door un-knocked. Meetings with pro-cannabis offices can still be very beneficial. Positive discussions, like political strategies to get more Republicans to co-sponsor bills and just simply checking that pro-cannabis legislators are co-signers on all the bills that NCIA is introducing, is a job in itself. For example. Rep. Diana DeGette (D-CO) was already a sponsor on the banking issue but after day one of lobbying, she pledged her support for NCIA’s tax bill, H.R. 1855.