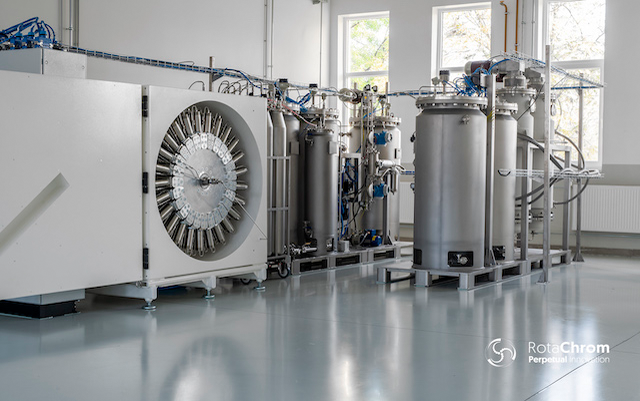 As the cannabis and hemp industries grow, the technology necessary for mass production must evolve to meet the increased demand.

Humans used the cannabis sativa plant long before California legalized medical marijuana in the mid-90s. Before prohibition, physicians prescribed cannabis sativa tinctures, and the U.S. Pharmacopeia recognized the compound as a treatment for multiple conditions. Furthermore, anthropological research shows that humans have used cannabis and hemp for centuries before that, as well.

Needless to say, we’ve come a long way since then, thanks to science. As with most products in our modern world, scientific discoveries and technological advances refine and enrich our lives. Horses gave way to the automobile, brooms gave way to vacuums, and telephones gave way to cell phones.

Likewise, advanced technology solutions are adapting to meet the needs of increasingly complex, highly regulated markets. Interestingly, chromatography, a technology used in analyzing and creating many of the products and medicines we consume daily, is making evolutionary strides to keep up with the booming business of hemp and legal cannabis.

The History of Chromatography

Chromatography is a process that was designed and developed in 1903 by Russian botanist Mikhail Tswett to separate components of a mixture. 120 years of evolution and several technological milestones later, chromatography is used to test and analyze various compounds and contaminants in foods, beverages, and even antibody analysis for vaccine creation.  The separation occurs as the material is moved by the mobile phase through a column filled by the stationary phase.

Glancing back through time, we’ve seen many significant improvements in the system. What started as lab-scale testing and analysis equipment has grown into an industrial-scale, full-production solution for a variety of industries, including hemp and legal cannabis.

Discussing these chromatography advances in a recent interview with Kelly Peterson, the Vice President of Technical Services for RotaChrom North America, he explained the significant differences in their technology: “Traditional chromatography uses a solid stationary phase often with silica gel that often creates inconsistent performance due to packing challenges. In addition the effectiveness of the solid stationary phase decreases run after run.”

Comparatively speaking, the advantage of their technologies, he stated, “Our CPC utilizes a liquid as the stationary phase, so it can maintain a consistent output run after run.”

Like other botanical and pharmaceutical products, molecular compounds are found in hemp and legal cannabis that have unique properties and individual value when extracted and isolated. Although these separation processes were initially designed with laboratory analysis in mind, the current state of the hemp and legal cannabis industries highlights the necessity for increased capacity and throughput with industrial-scale chromatographic processes for commercial applications.

Hemp and legal cannabis processors are quickly learning that as research continues to increase, our knowledge regarding the potential for cannabinoids and the demand for the individual compounds and specific product formulation grows exponentially. Additionally, with the gray area of THC legalization, along with the updated rulings from the USDA regarding hemp production, the need for purification processes that can scale to meet the operation is critical.

Pesticide and contaminant detection and removal are also areas of interest for this technology. Although cultivation regulations have reduced the number of contaminants found in hemp and legal cannabis, unexpected or accidental contamination can happen.

Unfortunately, legacy chromatography systems simply could not meet the production requirements of these rapidly growing and changing operations. With massive hemp fields and gigantic cannabis operations, the older solutions created bottlenecks in production and substantial consumable costs. In short, the old chromatography methods were slow, inefficient and cumbersome.

Recognizing the shortcomings of the legacy processes, RotaChrom’s engineers set out to resolve the problems.

In CPC, separation occurs between two immiscible liquid phases. The stationary phase is immobilized inside the rotor by a strong centrifugal force. The mobile phase, containing the sample to be purified, is fed under pressure into the rotor and pumped through the stationary phase in the form of tiny droplets, or percolation. This is a simple and reproducible mechanism that leverages different compound partition coefficients.

By utilizing equipment design software and running thousands of simulations, the product development team at RotaChrom identified drawbacks to certain cell designs, including back mixing, lack of space and bad flow dynamics. In light of these issues, the engineers made several alterations, which led to accomplishing several production benefits, including:

A Phased Approach to Scalability

Peterson noted, “We have been in the chromatography field for over a decade, long before the hemp industry found us.” Building on this experience, and their original prototype, RotaChrom offers a full suite of equipment to help producers scale their operations with a phased approach.

RotaChrom’s pilot-scale device is designed for small volume purification. This machine is intended to give chemists and technicians the ability to test various methods and optimize their processes before moving into the manufacturing phase with industrial-scale equipment.

Specifications state that the rCPC allows for inputs up to 100-150g per cycle with an average flow rate of around 200-300mL per minute with a total throughput of 1-2kg per day. At about 3 feet in height and over 1,200 pounds, this is the smallest device RotaChrom offers.

At this next level, the CPC technology becomes much more impressive in production scale and stature. “At six feet tall and weighing nearly 4,000 pounds, at conferences we’re often asked if it is an airplane engine,” Peterson mused.

All joking aside, the iCPC is an impressive machine that requires an industrial environment and installation. While large pharma companies have the expertise to manage the solvent volumes during the continuous operations of the iCPC, many of the hemp and legal cannabis companies needed additional support.  RotaChrom offers additional equipment forming an integrated solution. Together they are referred to as production CPC (pCPC)  “The pCPC comprises an automated mixer settler, as well as buffer tanks to feed the iCPC, and includes solvent recovery in the waste stream.  We also offer a two stage solvent processing solution for the fractions containing the Compounds of Interest.  We utilize our own development together with equipment from Heidolph, our strategic alliance partner” Peterson explained.

The system boasts a considerable increase in productivity, processing up to 800-1,200 grams of input material per cycle with an average flow rate of around 2,5 L per minute. At the end of the day, this scaled-up process can accommodate up to 15-20 kilograms of throughput based on a 16-hour production environment.

The entire system can be scaled up or scaled down based on the producer’s needs.

Given the wide range of benefits and increasing industry demand, more and more leading universities are incorporating the science of CPC into their programs.

RotaChrom also recognizes that there are still barriers to entry in the hemp and legal cannabis markets. Too often, entrepreneurs find themselves deciding between making a large up-front investment to save on consumables or less initial capital in albeit high monthly consumable expenses.

Unfortunately, many producers struggle to find the financing necessary to make large startup investments because of banking restrictions and hesitancy with the fledgling industry. The company designed its policies to help hemp and cannabis industry pioneers by doing what they can to help companies get beyond those roadblocks. Peterson announced, “We are offering financing for early-stage companies too.”

A Catalyst for Commercial Cannabis

As we glance back over the last 120 years of technological advances and the acceleration of those developments in recent years, we can only ponder where we’ll be in another decade. With the momentum building behind the legal cannabis and hemp industries, improving mass production processes to create safe products efficiently seems like a solid prediction for the young sectors.

While changing laws continue to change the landscape for the infamous herb, one concept seems consistent – technologies like chromatography continue to help pave the way for commercial cannabis production.