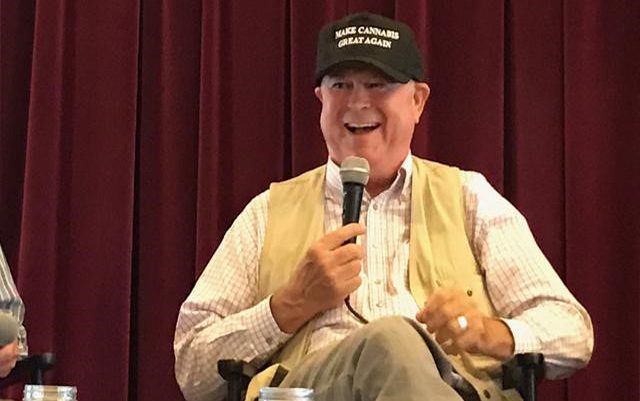 Included in the extension is the landmark piece of legislation, Rohrabacher-Farr, which limits the DEA and DOJ ability to enforce federal marijuana laws in states where medical marijuana is legal under state law.

Congressman Dana Rohrabacher, the co-author of the historic legislation, recently made an unscheduled appearance at the State of Marijuana Conference on the Queen Mary in Long Beach. He sat on a panel where he wore a “Make Cannabis Great Again” hat in support of states’ rights and individual freedoms to consume and operate legal cannabis businesses.

On stage, the congressman made statements that on the federal level, “the momentum is on our side.” He stressed the importance to speak to your elected representatives and not waste time. He assured the crowd that he is committed to continuing his tireless fight to round up more Republican support in Congress in regards to cannabis causes.

In an interview with The Marijuana Times, when asked about presidential candidate Donald Trump’s position on Cannabis, Congressman Rohrabacher said, “I have spoken to Mr. Trump personally, and he has assured me that if he were to become president he intended to honor the states’ rights to medical marijuana laws.” He also indicated that at this time, “Mr. Trump has no position on recreational use, rescheduling /descheduling of marijuana on the federal level in the future.”

The California Congressman is heading back to his home state to continue to campaign before the election. Congress goes back into session November 8th after the conclusion of the election.