Marijuana prohibition creates incentives that normally would not exist. The high prices charged on the black market reflect the risk that is being taken by those who supply illegal cannabis. Those high prices bring high profits, making the immense risk worth it to so many people over the last several decades.

One of the people who took on that immense risk is Robert Platshorn, a member of the infamous “Black Tuna Gang”. Robert and his partners, over the course of several months in the late 1970s, smuggled roughly half a million pounds of marijuana into the United States, reaping huge profits. 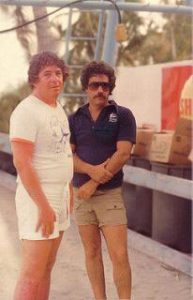 But Robert also saw the other side to smuggling marijuana in the era of prohibition, spending nearly three decades of his life in various federal prisons for nonviolent marijuana offenses; he is the longest-serving federal prisoner in that category in history.

Robert has been a free man now for several years, and he has been a busy one at that. I recently caught up with Robert to ask him about activism, his colorful past and more.

Robert Platshorn: In school in the 1950s we were told first that pot was the same as heroin and you would end up “with a monkey on your back”. By the Cold War years of the late 50s, we learned that marijuana was a communist plot to destroy America’s will to fight/compete. We were actually told to look for a small black spot on cigarettes, where commies injected marijuana before the cigs were packaged. Our neighborhood anti-drug DARE speaker was “Toodles the Cop”. Toodles was a hopeless drunk, often found passed out on duty. His regular assignment was escorting kids across the busy downtown streets.

MT: How did you get involved in the cannabis smuggling business?

RP: There is a detailed explanation in the first chapter of my memoir “Black Tuna Diaries“. The short explanation is, a friend in the pitch business was driving loads up north for a Florida smuggler. He offered me part of each load, if I could find him customers. When that stopped, I needed sources for my customers. Living in Miami at the time, one could trip over people who were trying to sell big loads of weed. We partnered with a local smuggler who penciled us out of most of our earnings. So we got on a plane to Barranquilla Colombia to find a “connection”. What happened in Colombia is an amazing story in itself and can be read in “Black Tuna Diaries”.

MT: When you retired from smuggling, did you have any inkling of getting caught down the line?

RP: We made an agreement at the start that we would stop when each of the three partners had managed to accumulate a million bucks. We were out of the business for almost a year before the DEA began an investigation based on informers, none of whom were part of our organization.

MT: How did you find out the cops were on to you?

RP: Our friends who were called to the Grand Jury let us know immediately. Our legitimate business accounts at local banks were slammed as soon as the FBI notified the banks that they were investigating us.

MT: How did you pass the time during your almost 30 years in prison?

RP: The last eight chapters of my book detail my thirty year journey through eleven federal prisons. From the Super Max at Marion, IL where Gotti died, down to Eglin Air Force Base often mistakenly called Club Fed. The stories I picked for the book are all true, often funny or frightening, but never dark and depressing. I did not write this book for sympathy. Black Tuna Diaries is in its seventh printing because it’s an exciting, fun read.

The first thing I had to learn was how to stay alive in America’s most dangerous prisons; first at the Super Max and then at Lewisburg Penitentiary. The rest of my time was spent reading (over 3000 books), working in prison kitchens and laundries, doing legal work for myself and others, playing tennis and volleyball and listening to NPR.

MT: How hard was it to adjust to life outside when you were released?

RP: The only things difficult to adjust to were the prices of everything and the paranoia when seeing a cop car while driving. 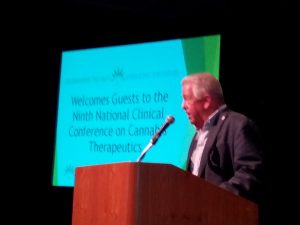 MT: What kinds of activism have you been involved with since you were released?

RP: As soon as I left prison I joined NORML of FL and became a Director. At the same time I began petitioning for PUFMM to put medical marijuana on the FL ballot. I spoke at local government meetings and was able to convince state Senator Jeff Clemens to introduce the first medical marijuana bill in the FL legislature.

MT: What was the impetus behind The Silver Tour?

RP: In 2010 California failed to pass Prop 19 (full legalization). Exit polls made it clear that it was seniors that voted no. That’s when I decided that it was long past time for someone to reach out to seniors with the truth about cannabis and how it can benefit seniors especially.  Seniors have the greatest need and no one was speaking to them. Seniors are the most potent voting bloc in almost every state. The Silver Tour is the only organization that uses traditional mass media to educate seniors. Our live shows at big senior communities garnered great publicity. Front page Wall St Journal, CNN Money, The Daily Show and lots of others. I’m an old TV pitchman, so I produced “Should Grandma Smoke Pot” an “Edumercial” that aired hundreds of times on dozens of TV stations. We put billboards on major roads and last September we aired 4,000 sixty second “Cannabis Facts” on top news/talk radio stations in seven states. 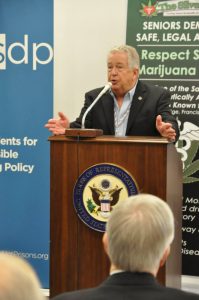 I’m currently raising funds for a media campaign to ensure senior support for cannabis in many of the states with ballot measures. The details are on the Silver Tour website or Go Fund Me.

MT: What projects are you currently working on?

RP: We are currently developing a comprehensive group of services for seniors/veterans. This includes training for dispensaries, doctors and caregivers who will provide senior-friendly services and education.     We are working on setting up a database and referral website. When this is up, we plan to launch a beta test in one or two legal states. This is the URL: http://Silvertourapproved.com. You can sign up there for more info as it becomes available.

Even after losing 29 years of his freedom, Robert is far from a bitter man. He shows a gratefulness for life that could be overshadowed by hatred in a lesser man (I’m not sure I could do it myself). But even though he is not bitter, Robert is most certainly getting his revenge. He is getting it by spreading the truth about the very plant whose prohibition caused him to be sent away all those decades ago.

Robert Platshorn’s revenge is the knowledge he spreads; knowledge that is being used to hammer the walls of the very prohibition that cost him so many years of his life and bring relief to so many who needlessly suffer.