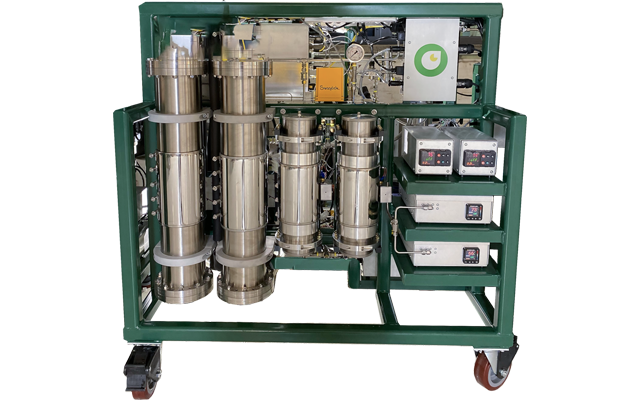 In a move many have dubbed the extraction industry’s “moon shot,” Green Mill Supercritical announced it has begun shipping its Real-Time Winterization™ (RTW™) module, eliminating the need for ethanol winterization, the time-intensive and costly process that adds days to each extraction while increasing building and operating expenses by hundreds of thousands.

“We have always said that we wanted to push CO2 extraction beyond known limits,” said Wes Reynolds, CEO of Green Mill Supercritical. “But what we have done with Real-Time Winterization is not just push the limits, we have basically removed them. Now that we are shipping this incredible new technology, we look forward to hearing how customers put it to the test. We think this is just the beginning of the RTW story.”

The company first announced its breakthrough RTW technology in April, and has since been working with extraction companies nationwide to generate and share validation of their claims about the process. They announced initial RTW successes with CBD extraction in late Q1, and then followed up in April by releasing validation tests for THC extraction in a full production setting. In September, Green Mill unveiled conclusive data demonstrating the technology produces premium, high-quality oil with nearly no loss of cannabinoids straight from the machine during the primary extraction without the use of ethanol.

Cannabinoid loss highlights a cost that is not visible but is significant nonetheless. It is one example — among many — that makes up a complete picture of a lab’s efficiency once one looks beyond the amount of biomass that can be sent through the extraction machine itself. Key benefits of the Real-Time Winterization module include:

With the era of ethanol-based winterization coming to an end, extraction businesses will realize tremendous savings in construction, capital expense, operating expense, and avoidance of product loss utilizing GMS’ Real-Time Winterization. With ethanol winterization, there are onerous burdens on the production process, from purchasing, handling, and disposing of the ethanol, to the CAPEX and OPEX requirements, to the management and salaries of staff. Past efforts to bypass ethanol winterization with supercritical CO₂ failed due to the inability of the extraction equipment to achieve and sustain the required conditions. Quality and efficiency limits made it a non-starter for any serious operation.

“Our team has defied conventional wisdom and questioned the status quo all along by insisting that CO2’s capabilities were not being explored adequately by the industry as a whole,” said Jeremy Diehl, CTO and co-founder of Green Mill Supercritical. “This is the entire purpose behind Green Mill Supercritical, so we are enjoying a bit of a proud moment with the shipping of this new product. We have worked for this achievement for a long time, and now that we’ve accomplished it we are looking forward to the next innovation.”