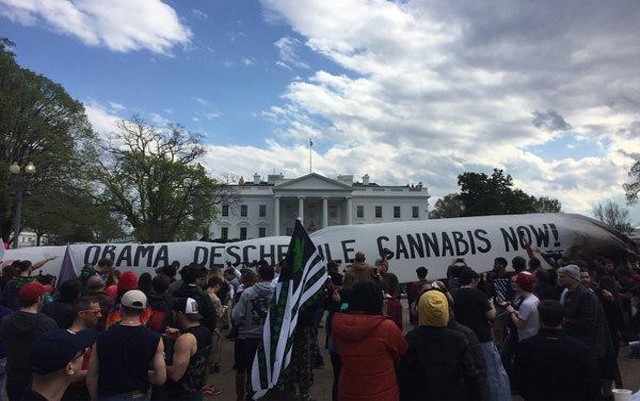 In a joint effort to deschedule marijuana from the Controlled Substance Act, protesters from DCMJ and the DC chapter of NORML came together in front of the White House to call upon the President to take the plant off the list of federally banned substances.

DCMJ, a community pro-pot advocacy group in Washington D.C., organized the April 2 smoke-out. They encouraged protesters to smoke, vape, and eat the herb in front of 1600 Pennsylvania Avenue to get the President’s attention.

The grassroots advocates singled out the Commander-in-Chief on their website, calling him a ‘hypocrite’ when it comes to cannabis. “[President Obama] smoked cannabis and became the president of the United States, and while he might think cannabis is a bad habit, does he seriously think it’s on par with heroin, nicotine, or alcohol,” they asked him on their website.

Using the hashtag #Reschedule420, DCMJ was alluding to the numbers historically associated with cannabis, April 20th and the time 4:20. Although a bit confusing because they actually want to completely deschedule marijuana, they chose the hashtag to “reschedule 4/20 this year because Obama’s been a BIG ZERO on cannabis reform.”

NORML’s DC chapter joined in the self-described act of “civil disobedience” protest but notably missing were the cannabis trade association representatives, non-profits and other cannabis reform groups. Organizations such as the National Cannabis Association (NCIA), The Marijuana Policy Project (MPP), Students for Sensible Drug Policy (SSDP), Law Enforcement Against Prohibition (LEAP), the Drug Policy Alliance (DPA), and Americans for Safe Access (ASA) did not attend or promote the smoke-out.

Prior to the protest I asked Robert Capecchi, Director of Federal Policies for The Marijuana Policy Project why MPP wasn’t participating. “I prefer not to comment on other organizations” he told The Marijuana Times. “Right now Obama made it clear that he won’t work on the effort [to reschedule marijuana] this year which is unfortunate,” he also added that getting the President to change the law is a tall order and Congressional action would be much easier.

RELATED ARTICLE: Rescheduling Cannabis: It’s Not a Matter of If, But When

The protest was a success in terms of media coverage; TIME, CNN, The Washington Post, NBC News and the Associated Press all wrote about the 51-foot inflatable joint. However, most of them failed to make the distinction between federal and nonfederal laws when it comes to where protesters were using cannabis in public.

It’s important for national news outlets to understand the differences between local and federal laws when it comes to marijuana because it’s critical to understanding the policies these protesters are trying to reform.