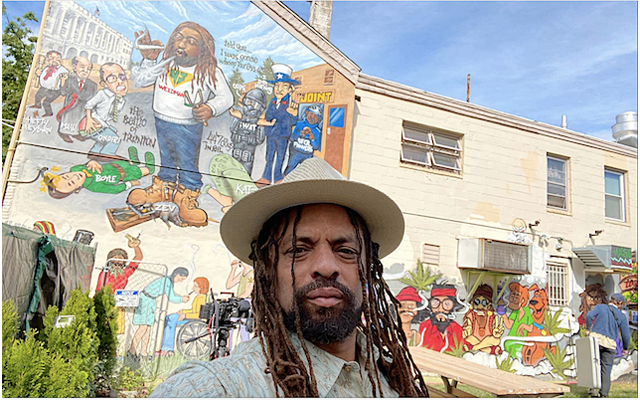 Legendary marijuana activist and ganjapreneur Ed “NJWeedman” Forchion is continuing his legacy of promoting ‘puff and paint’ cannabis creativity.  The opening of his new marijuana lounge in Miami, The Joint of Miami in the Wynwood Art District, will be an extension of his legacy in support of ‘pot art.’  The Joint of Miami, alongside NJWeedman’s Joint in Trenton, NJ now both boast beautiful new outdoor wall murals painted by graffiti art master, Ayumi Chisolm aka SANOizm. In addition, NJWeedman is hosting an art themed pre-opening “Puff & Paint” event at his Miami location May 14th, 10:00 a.m. ET through to June 11th, 10:00 p.m. ET.  “Puff & Paint” at The Joint of Miami is inviting artists to blaze and paint while creating artwork for the interior walls of the weed lounge! Professional artists who are looking to participate can send examples of their artwork to art director Jazz Tarver at artdirector@thejointofmiami.com for consideration and invitation details. The Joint of Miami is located at 2010 NW Miami Ct. in Miami.

NJWeedman’s longstanding love for weed art dates back to his first marijuana dispensary, The Liberty Bell Temple, located in Hollywood, CA. In 2008, Ayumi Chisolm aka SANOizm painted an interior canvas and mural covering the ceiling plus the front windows of that now mythical location. SANOizm (SimpleArtNiceOutlinez, StylesAllwayzNumberOne, SmokeAnotherNiceOne) is an award winning multi-disciplined urban artist originally from Cleveland, Ohio. He began doing graffiti art in 1983 and now travels the world creating community aerosol art murals, illustration and designs. His mark on now three of NJWeedman’s businesses are important contributions to the culture of cannabis creativity. Sano maintains a small art studio in Chinatown, Los Angeles where he prints his brand, Thieveland T-shirts.

“It was important for me to have Sano leave his artistic impression on both my Trenton and Miami locations. I consider his imprint a blessing to my businesses. He has artistically documented my marijuana legacy in a way that words could not capture. If a picture is worth a thousand words, the spirit of his images is worth 10,000 words. I think my favorite is his mural outside of NJWeedman’s Joint in Trenton. It’s called “The Battle of Trenton 2” and is an accurate depiction of how I won my fight against the prosecutor’s office in Trenton for unfair charges filed against me (see https://nj1015.com/nj-weedman-promises-to-give-prosecutor-legal-ass-whooping-after-major-bust.)”

“It’s no secret that marijuana and hip hop art are like first cousins,” adds Sano, an avid partaker of the herb. “It has been an amazing journey to illustrate the story of NJWeedman with my art. I deeply appreciate his patronage over the years and am excited to have my work adorn both locations in Trenton and now in Miami, particularly in the Wynwood Art District which is famous for Art Basel and street art.  Our work is sometimes overlooked and underrated in the contemporary art world but is an important component of our culture.”

A cult figure in the marijuana legalization community, Forchion has since become one of the most vocal and controversial members of the pro-pot movement. He is the founder of the Legalize Marijuana Party of New Jersey and has run previous campaigns for Governor, U.S. Senate, Congress, the State Legislature, and the Burlington County Board of Freeholders. After decades of public persecution, Ed Forchion is finally being acknowledged for his decades of activism. He has spoken on virtual panels at Stockton and Princeton University, was featured on NBC News in New York and he is slated to appear on an upcoming segment of Vice TV and ABC-TV Nightline.

While NJWeedman’s Joint in Trenton, NJ is a bustling marijuana themed eatery and smoke shop with his partner, Debi Madaio, The Joint of Miami is an extension of the NJWeedman brand, offering a more inclusive cannabis experience. The Joint of Miami, located in the Wynwood Art District, will be an art and music marijuana lounge with ‘members only’ access.  Slated to open midsummer, The Joint of Miami will be a franchise operation and NJWeedman is already fielding inquires in other cities.

For more information about The Joint of Miami and Puff & Pass, head over to https://thejointofmiami.com/.

Take a puff with NJWeedman and read all about his adventures at https://linktr.ee/NJWeedman
Follow Ayumi Chisolm aka SANOizm at @sanoizm on Instagram.