Democratic presidential nominee, Hillary Clinton is killing it when it comes to raising campaign money. With $425.4 million against Trump’s mere $125 million, it’s apparent that her fundraising strategy is paying off. The Marijuana Times gained exclusive insight into one of her fundraising circles at an event this past weekend in Nantucket, through a trusted source specializing in cannabis policy.

It was a small group of people and they were not interested in talking to our source about marijuana policy. “It’s not even on their radar,” our source said.

The event took place at the home of Elizabeth Frawley Bagley, a long-time top Democratic fundraiser who was the ambassador to Portugal under Bill Clinton. Tickets went for upward of $2,000 a seat. 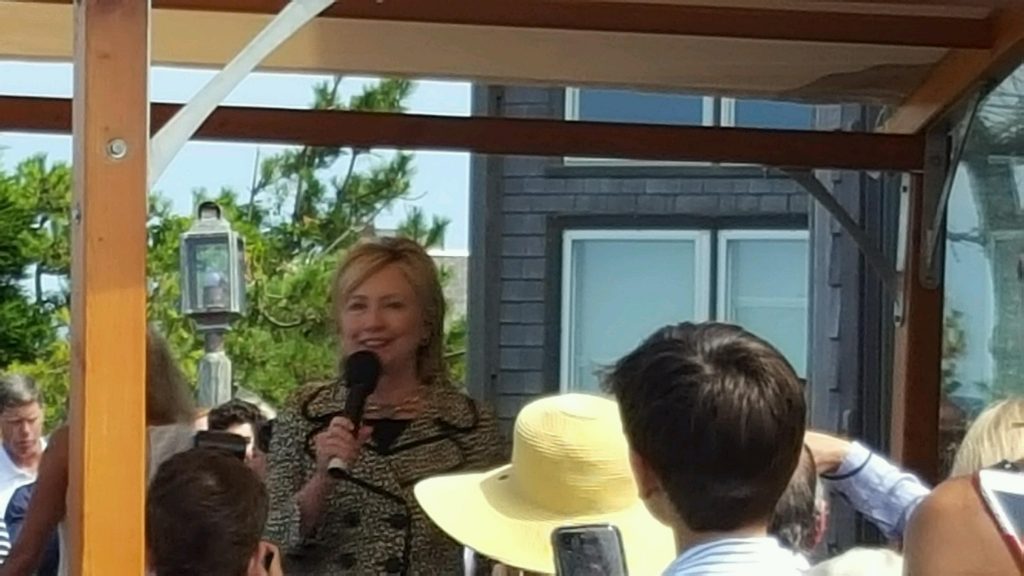 “The fundraiser was called ‘Conversations with Hillary – more like her talking her rehearsed speech at the crowd,” our source added, “There wasn’t much of a back-and-forth conversation between the Democratic nominee and her financiers during her speech.”

There was one person who indulged the cannabis policy insider about the plant, but she wasn’t in the front lines of the 2016 campaign. She was involved in the presidential administration of the nominee’s husband, Bill. She said that she doesn’t believe the issue of taking cannabis off its Schedule 1 status is a priority.

Basically, the mood toward marijuana was indifference.

“The lack of interest in the policies surrounding marijuana at the event means the issue, and its supporters, are up for grabs this election,” said our source, who is very familiar with both the political and financial world.

After news broke this summer that the Drug Enforcement Agency wouldn’t take cannabis off its schedule 1 status, Clinton’s camp addressed the decision in what could be interpreted as a recent effort to broaden her reach over liberal, cannabis supporting Democrats.

Expanding on Clinton’s belief of allowing states with legalized marijuana to become ‘laboratories of Democracy,’ her senior policy advisor, Maya Harris, issued the following statement in response to the DEA decision: “Marijuana is already being used for medical purposes in states across the country, and it has the potential for even further medical use. As Hillary Clinton has said throughout this campaign, we should make it easier to study marijuana so that we can better understand its potential benefits, as well as its side effects.”

Harris continued, “As president, Hillary will build on the important steps announced today by rescheduling marijuana from a Schedule I to a Schedule II substance. She will also ensure Colorado, and other states that have enacted marijuana laws, can continue to serve as laboratories of democracy.”

There is one marijuana reform bill, the CARERS Act, introduced by Senator Cory Booker (D-NJ), and Senator Kirsten Gillibrand (D-NY) which sounds very complimentary to what Clinton wants to do with the cannabis. Neither Clinton nor Trump have officially endorsed the legislation, but with bipartisan support from Democrats like Sen. Chuck Shumer (D-NY) and Sen. Lindsey Graham (R-SC), it could be a viable option for Clinton.

On marijuana, Clinton has said before that she supports research and “would support states and localities that are experimenting with this.” The CARERS Act contains reforms that would give access to medical marijuana to America’s veterans, as well as reschedule the plant from Schedule 1 to Schedule 2.

Americans for Safe Access believe that her gradual acceptance of marijuana reforms is a sign of progress for their cause. They wrote about it in a blog stating, “Her remarks are noteworthy in part because this position is a strong indication that Hillary Clinton would sign the CARERS Act if she were President.”

While mired in controversy as to whether Big Pharma interests are best served by making cannabis Schedule 2, that is what many cannabis industry analysts say the CARERS Act would accomplish – and cannabis industry leaders would rather see the plant descheduled then placed under the FDA, and therefore, within arm’s reach of Big Pharma. A search into her campaign’s purse through OpenSecrets.org reveals her biggest donors to date.

Clinton is clear on campaign finance – she wants accountability. It was even highlighted on her campaign website. On the issue, she said that “There’s no question that we need to make Washington work much better than it does today. And that means, in particular, getting unaccountable money out of our politics…That’s why I’m so passionate about this issue, and I will fight hard to end the stranglehold that the wealthy and special interests have on so much of our government.”

Clinton’s platform of curbing special interests is righteous, but according to political experts at ‘The Hill’, she’s being two-faced. “Cash from drug companies poured in despite Clinton’s tough public stance on the industry,” ‘The Hill’ adds, “Democratic presidential frontrunner Hillary Clinton has received more campaign cash from drug companies than any candidate in either party, even as she proudly declares the industry is one of her biggest enemies.”

The Race Against Trump

Democrats are calling the Nantucket fundraiser event a success, as it falls in line with their messaging that they are out-fundraising the Republican nominee because voters are “frustrated with Republicans’ brand of irresponsible governance and their inability to stand up to toxic Republican presidential nominee Donald Trump,” Democratic Senatorial Campaign Committee Executive Director Tom Lopach wrote in a statement.

The Republicans, on the other hand, are trying to keep the campaign on course and Trump on message. With the recent shakeup atop the Trump campaign, Washington insiders at Politico report that ‘Sean Spicer, the Republican National Committee chief strategist and communications director, is going to be working out of Trump Tower in New York three or four days a week, helping the campaign craft a message and strategy for these final days of the campaign.’

Kellyanne Conway, Trump’s new campaign manager, alluded to Spicer’s new role on ABC’s ‘This Week’ saying, “We are committed to winning back the White House and maintaining our majorities in the House and Senate. To that end, our political, digital, data and communications teams will continue to integrate and coordinate with the top of the ticket.”

The GOP strategy has yet to completely unfold, and our source wouldn’t be surprised if, going forward, Trump took a more relaxed stance on cannabis. “He could, essentially, take all the pot enthusiasts and cannabis investors that were gunning for Bernie,” said our cannabis insider.

This week, Clinton will campaign for one day while continuing her fundraising efforts on the West Coast; Trump will be concentrating on delivering some memorable, TV-worthy moments at his four scheduled rallies.