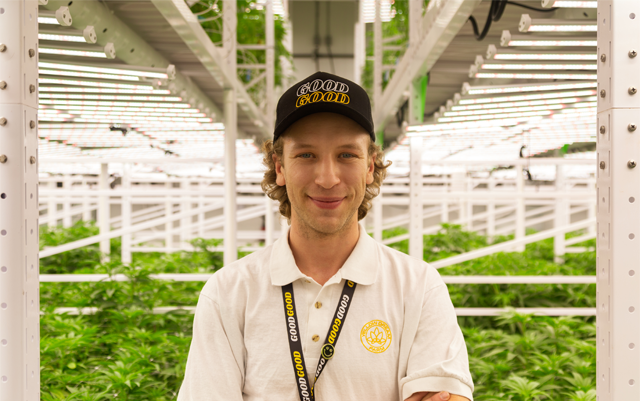 Each April 22nd, Earth Day is celebrated nationwide, although the care and protection of our most precious resources should be a year-round activity. At Yellow Dream Farm, we aim to bring the most cutting-edge and cost-effective eco-efficiency to our cultivation facility, and make sustainability a core part of our ethos. With our major sustainability efficiencies, we’re able to harvest 300 pounds per week when compared to 150 pounds per week from a facility of the same size.

This year, we want to bring to light three best practices that all cannabis cultivators can adopt to help protect the planet and also drive a meaningful value to their business’ bottom line. It’s the perfect opportunity to take a close look at your cannabis operation and identify space for continual improvement.

How to Reduce Water Consumption in a Cannabis Grow

Especially in a region like ours in California, the heart of the high desert, water is scarce and necessary to preserve. As cannabis has actually been shown to consume more water per plant grown than other commodity crops, this creates an issue both in cost and in scarcity of resources. MJBizDaily reported, “On average, the researchers found, a cannabis plant consumes an estimated 22.7 liters, or 6 gallons, of water per day during the growing season, which is typically 150 days long from June through October.” And for operations that are growing year-round indoors, the amount of water needed can be much more.

Both out of sheer necessity and because of our core sustainability ethos, we needed to identify efficiency to maximize the water we had on hand. Once our cannabis plants are well-watered, we recirculate the output through condensate water which comes from our A/C units and dehumidifiers. We also make the most of our runoff nutrient water by re-filtering and re-purposed so no nutrients go to waste. This keeps our plants happy, healthy, strong, and in need of fewer pesticides.

We also have efficiency built right into our facility, with freezer panel walls to hold temperatures at consistency rates and fully automated to be dialed in to specific needs for each flowering room.

The next added benefit? We then pass these massive cost savings along to our customers.

How to Reduce Energy Consumption

The costs of lighting, cooling, and processing cannabis can be staggering. As The Guardian reported, “The $3.5 billion industry is one of the nation’s most energy intensive, often demanding 24-hour indoor lighting rigs, heating, ventilation and air-conditioning systems.”

It can also be unexpected, as power companies in Oregon found shortly after legalization. In fact, “Pacific Power in Portland experienced seven blackouts traced to marijuana production facilities the summer after Oregon legalized recreational marijuana.” No one forecasted the massive demand on the power grids that cannabis cultivation requires, and few companies were prepared.

Lighting is a major capital cost that comes with environmental repercussions. To combat this, we use LED technology for our primary lighting systems and use LED spectrums to determine which spectrum will be most beneficial to the plant at any given stage in its growth cycle. By dialing in to his level of precision, we save on costs and save on energy consumption. To date, we’ve found our energy consumption is 30 percent less than prior to this technology.

Imagine that instead of having to grow outward to scale your business, you can scale upward while retaining the same physical square footage – that’s the power of vertical farming! By packing the maximum amount of plants from floor to ceiling, our cultivation facility has managed to double output simply by using a growing system that’s already seen in large-scale agriculture.

As a cannabis grow operation scales, its needs grow exponentially. In order for cannabis companies to adapt, grow, and thrive, efficiencies need to be baked right into the business. Vertical farming allows us to maximize canopy square footage while minimizing Cost of Goods Sold (COGs) to produce high-quality cannabis at scale year round, all grown in our indoor facility.

Our rooms contain double stacks to double room capacity by using ceiling heights instead of square footage. Even though vertical farming has larger start-up costs, we can maximize square footage and output, allowing us to get a better and faster ROI.

We believe vertical farming is the most efficient and most profitable way to maximize output and our numbers can back that up; for example, we can produce double the amount of flower than the average single-tier room with the same square footage, without doubling the cost.

This Earth Day, take a close look at your cannabis cultivation facility from the ground up and use this opportunity to find areas for continual improvement. Your accountants, and your local environment will thank you!