Maryland saw a back-and-forth power game this week as a cannabis bill which was vetoed by the Republican governor was resurrected by the majority Democratic General Assembly with this week’s vote to overturn the governor’s veto.

Senate Bill 517 was drafted in attempt to make possession of cannabis paraphernalia a civil offense punishable by a $500 fine instead of a criminal offense.

Supporters of the bill say it was needed to rectify an oversight from a 2014 law which decriminalized possession of less than 10 grams of marijuana, but left a big loophole – the items used to smoke cannabis were left with severe criminal consequences.

Del. Ann Kaiser, a Montgomery County Democrat, said not decriminalizing paraphernalia would be like making eating blue crabs legal, but not Old Bay seasoning. That, she said, would be “inconceivable.”

Republican Governor Larry Hogan’s veto reads, “the General Assembly attempts to correct the unintended consequences from last year’s law but in doing so creates legal uncertainties including the elimination of criminal sanctions for the use of marijuana while operating a motor vehicle or in a public setting.”

In an exclusive interview with The Marijuana Times, Kevin Cranford, the Deputy Director of Maryland NORML (National Organization for Reforming Marijuana Laws) told that the bill has nothing to do with law enforcement being able to do their job,

“they’re losing a weapon in their tool kit to search people and their cars.” Cranford adds,

DUI/DWI is still illegal, so if they suspect someone of driving impaired they’ll pull them over and test them. If they don’t pass, they’ll get arrested regardless the substance.”

Maryland’s Office of Policy Analysis (OPA) is in charge of writing the policy analysis attached to the original bill. They found, under this bill, anyone driving under the influence of a CDS (controlled dangerous substances) would be subject to the same consequences no matter the drug. It’s included in their formal analysis under the subheading “Driving While Impaired”.

Driving While Impaired Under § 21-902 of the Transportation Article a person may not drive or attempt to drive any vehicle while impaired by a CDS. A person may not commit this offense while transporting a minor.

With a conviction for an alcohol- and/or drug-related driving offense, a violator is subject to a range of penalties involving fines and imprisonment, as well as suspension or revocation of the driver’s license by the Motor Vehicle Administration. A person convicted of driving while impaired by a CDS is subject to fines ranging from $1,000 to $3,000 and/or a maximum imprisonment term of one to three years. A repeat conviction within five years requires a mandatory minimum penalty of imprisonment from 5 to 10 days or community service from 30 to 60 days, as well as a mandatory drug abuse assessment. Imprisonment includes confinement in an inpatient rehabilitation or treatment center or home detention that includes electronic monitoring for the purpose of participation in a certified or court-approved drug treatment program.

For those opposed to the possibility of smoking the herb in public spaces – the OPA’s fiscal analysis addresses it, “for purposes of this fiscal and policy note, it is assumed that the new civil offense and penalty including smoking marijuana in a public place are in addition to other applicable violations and penalties.”

Some Say It Creates a Gray Area

The Carroll County Times came out with an editorial explaining why they side with Governor Hogan.

“We think the veto should stand, or instead of overriding the veto, a new piece of legislation should be pursued that clears up possession of paraphernalia but keeps smoking in public or behind the wheel a criminal offense, just as having an open container of alcohol would be,” they wrote in the op-ed.

The editorial explains how Maryland police believe it’s better to have the smoking objects remain a criminal offense so they can have a sure way to get impaired drivers off the road.

As Carroll County Sheriff Jim DeWees explains, “if you are operating a motor vehicle smoking it, if you are in a motor vehicle smoking it and a driver is there, someone’s driving down the road, they can get high merely by being in the vehicle,” DeWees told the Carroll County Times. “So I don’t support you being able to smoke marijuana in public or in a vehicle at all. I just believe anybody who thinks that should have their head checked, honestly, because it makes no sense whatsoever.”

The Carroll County Times agrees that driving under the influence is still a criminal offense, no matter what the drivers’ drug of choice. However, “it’s not clear [to us] whether police can pull over a vehicle driven by someone smoking pot. And if police can’t initiate the traffic stop, it could be harder to get impaired drivers off the road.” 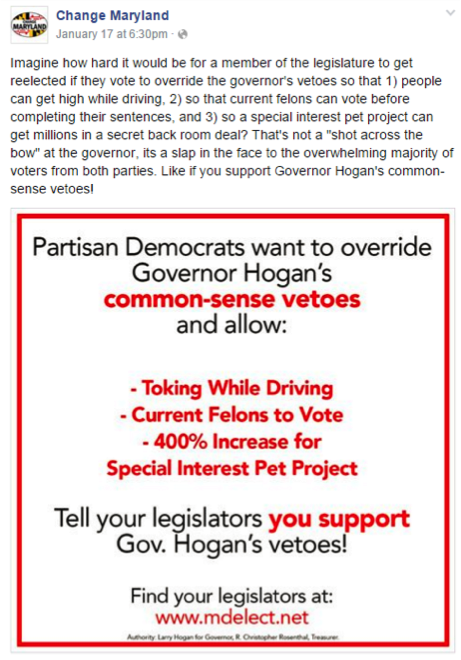 In response to the state attorney, advocates have been quick to point out that police can still pull over drivers who appear to be under the influence of drugs.

“It could be pills, coke, alcohol, whatever. No one is advocating for drugged driving or smoking and driving. We’ll stand with cops and say we’re not for it. But we believe a baggie bowl or papers shouldn’t be the reason someone goes to jail or gets a record, says Cranford.

Change Maryland, a grassroots organization started by Hogan that later morphed into his gubernatorial campaign – posted some controversial comments on their Facebook feed.

According to The Daily record, the original post from January 19th wrote, “Out-of-touch legislators in Annapolis want to override Gov. Hogan’s common-sense veto of the toking while driving bill, making it legal to drive!”

Democratic State Senator Bobby Zirkin, a sponsor of the original bill was outraged.

However, they still have a post from January 17th that uses the same language (Figure 1).

The Daily Record also reports that Douglass Mayer, a Hogan spokesman, said the governor stands by his veto letter and social media postings.

“If the senator wants to accuse states attorneys, chiefs of police, and sheriffs from around the state of lying he’s free to do so but the governor happens to believe the people on the ground are far better at understanding what law enforcement looks like,” Meyer said.

The paraphernalia law has been un-vetoed and will go into law sometime in the new year.